Norway has taken out a front-page advertisement in a major Afghan newspaper warning would-be migrants that potential asylum seekers “will be returned by force”, while the Belgian asylum secretary has written directly to migrants asking them not to come.

The headline of the ads, on the front pages of the Afghanistan Times and the Hasht-e-subh newspapers, read “Stricter immigration regulations in Norway – important information!”. 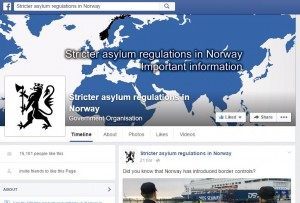 The print campaign began on Monday. A justice ministry spokesman said they may run next week as well and that Norway was considering doing the same in other countries.

One of the largest groups of asylum seekers are Afghans. Norway considers Kabul relatively safe even though much of Afghanistan remains chronically unstable amid continued fighting between the Western-backed government and Taliban militants.

“Afghans without need for asylum coming the #Arctic_route from #Russia, risk being sent to #Kabul. 500 returned from #Norway 2014/15,” a tweet from the immigration directorate read.

It was a reference to the northern route taken by some migrants in contrast to a majority that travels through Turkey and into Greece.

Norwegian embassies are also active in spreading the information.

Norway’s campaign emulates a similar move by Denmark, which in September published advertisements in Lebanese media outlining recent government measures including cuts of up to 50 percent in benefits for asylum seekers.

While it is yet to be seen whether Norway’s newspaper adverts will deter newcomers, it will at least be seen by thousands, quite possibly unlike Belgium’s effort this week. Already fending off accusations that the nation has become a haven for Islamist ‘sleepers’ and now resembles a “failed state”, the Belgian government’s announcement to migrants may add to their embarrassment.

Liked just 59 times, and shared 16 times compared to the 15,100 followers for the Norwegian effort, the message self-consciously signs itself off “This is a genuine message of the Belgian government”, perhaps anticipating it not being taken entirely seriously.

Emanating from the desk of Belgian State Secretary for Asylum and Migration Theo Francken, the message tells would-be migrants: “Paying smugglers to get you to Europe is a waste of money, a waste of time, brings you or your loved ones in very dangerous situations and this without any guarantee of success. Do not put faith in false promises by smugglers or social media!”

“The Belgian government can and will refuse to decide your asylum claim when fingerprints are registered in another European member state… A rejection of your asylum claim will result in an order to leave the country within 30 days. If you don’t leave voluntarily, then Belgium will return you by force to Kabul”.

The media campaigns by Norway and Belgium follow a similar initiative by Denmark in September, advertising changed in migration rules as a means to deter attempts to claim asylum. Printed in a number of foreign newspapers including titles in Turkey and the Lebanon, the advert informed migrants that the benefits they could claim in the country had been halved by the new government, and receiving the money depended on them taking Danish lessons and integrating into society.

Reuters Contributed To This Report