A Hungarian lorry driver has uploaded his expletive-laden rants as he drives through Calais, fending off migrants throwing bottles.

The unidentified big-rig driver has uploaded a remarkable 15-minute dashboard cam video (full clip below) of his drive to the port of Calais, which more resembles a journey through a warzone than a major conduit of international trade.

The clip shows his lorry being swarmed by migrants, which he shouts to as they bend his wing-mirrors back so he can’t see them trying to climb aboard. Aware that one migrant has climbed into the gap between the cab and the trailer, the driver shouts out of the window: “If you cut my pneumatic lines, I’ll kill you, you cocksucker. Get down off there!

As another lorry ploughs through the crowd while blasting its horn, the driver picks up speed.

Hurling insults at migrants as he drives, the Hungarian man swings the truck into the hard shoulder in the direction of migrants, before pulling it back into the road, not hitting anyone. The migrants return the favour by pelting the lorry with glass bottles.

Aiming the lorry for the migrant group, the driver screams in Hungarian: “Come here, with your fucking whore mothers, I’ll drive right through the lot of you!

“Comer here, you fucking mother fuckers… come on then! Fuck the lot of you. You and all your fucking whore mothers too!”.

In the full length video, the driver is generally less aggressive with his driving but no less angry in his tirades. Speaking to the camera, the driver explains he made the video to help people explain how bad things are in Calais, and to show them the truth. Appealing to the viewer, he says:

“Can you imagine what things are like, at night? …in the dark? Now that you’ve seen how things are in the daytime?”

Speaking to the viewer as well as the migrants by the road, the driver says, laughing to himself: “Why the fuck aren’t you all at home fighting? Your womenfolk are having to take up arms in your homeland, against your bourgeois regime and ISIS, you fuckwits”.

“And you lot are all here on the make instead. You lame bunch of dogs. You people are all just freeloading scrounging scum. You deserve to rot, all of you, alongside the [incomprehensible] with which you all suck each other off.

“While your wives are all fighting against terrorists, with machine guns! Fuck the lot of you”.

Clearly angered at the invasion of his own home nation by migrants pouring through the Balkans into Europe and exasperated by the state of Calais, the driver passes police and hundreds of migrants in 15 minutes of driving.

Passing a French police van, the driver laments the insignificant police presence, remarking there are only five officers to be seen for 18,000 migrants. Leaning out of the window and addressing the officers in French, he opines: “You need to have a wall of police either side of the motorway, because of these filthy scum”.

Violence towards lorry drivers from migrants attempting to break in to trucks as they drive to England is now a matter of daily routine for the men who make the run through Calais. Many have resorted to carrying weapons for self defence as they fear for their lives, as Breitbart London reported in November. 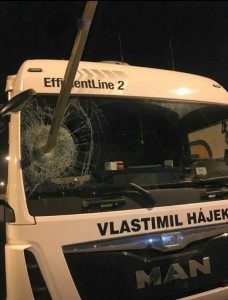 Although illegal in Britain, ‘Taser’ stun guns and CS gas are now being hidden in cabs by fearful drivers. One said at the time: “It’s risky ­because if you get caught with these weapons in Britain you are committing a criminal offence.

“But we need to be able to protect ourselves. The migrants are now arming ­themselves with knives and hammers and all sorts and they’re getting more and more ­aggressive.

“I think something bad will happen soon where either a migrant will kill a truck driver or it’ll happen the other way round”.

A shocking example of the dangers faced by truckers in Calais was illustrated today in a Breitbart London exclusive, with pictures showing how a driver brushed with death after a migrant-hurled wooden stake penetrated the screen of his cab.

Blaming the incident on the immigration policies of the European Union, the director of the haulage firm operating the lorry told Breitbart: “they threw the wooden stake through his window.

“Then five or six people on each side climbed up onto the cab and were trying to break in. They tried to destroy the cab.

“He was unarmed and defenceless so carried on driving with the wood in his window to get away. When he got to Calais he stopped and asked for assistance, but the police told him that as no one was injured they wouldn’t do anything”.