Britain’s elections regulator, the Electoral Commission, named Oldham as an area “where there appears to be a greater risk of cases of alleged electoral fraud being reported”, Breitbart London can reveal.

Following the Oldham West and Royton by-election, UK Independence Party leader Nigel Farage has told of his disappointment with the result, and tweeted publicly about his suspicions over the “perverse” outcome.

As a veteran of over thirty by-elections I have never seen such a perverse result. Serious questions need to be asked.

The Electoral Commission published the advice in January 2014, naming 16 local authority areas (out of just over 400 across the UK as a whole) where there appears to be a greater risk of cases of alleged electoral fraud being reported, including Birmingham, Bradford, Oldham, Slough, and Tower Hamlets.

Most of the areas named in the report have high and growing immigration rates.

The Electoral Commission report states: “These areas are also often home to communities with a diverse range of nationalities and ethnic backgrounds. We have heard some strongly held views, based in particular on reported first-hand experience by some campaigners and elected representatives, that electoral fraud is more likely to be committed by or in support of candidates standing for election in areas which are largely or predominately populated by some South Asian communities, specifically those with roots in parts of Pakistan or Bangladesh.”

The report also included a chart to show the rise in postal voting in the United Kingdom over the past few general elections. 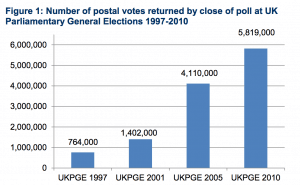 Mr. Farage has written exclusively for Breitbart London today: “Up until this point, I have made the last 21 years of my life about leaving the European Union. But I’m adding something else to my bucket list today: electoral reform.

“I don’t just mean a change to the voting system that left UKIP with just one Member of Parliament after achieving 4 million votes. I mean wholesale reform to postal voting, the House of Lords, and the unchallenged gerrymandering of successive governments.”