Northern Britain has spent Christmas being inundated with floods of “biblical proportions”.

For green activists like Bill McKibben this is obviously another consequence of man-made climate change.

And the politicians agree – not just left wing ones like Hilary Benn but also notionally conservative ones like local MP Rory Stewart, Environment Secretary Liz Truss and Prime Minister David Cameron. All have suggested that the floods are the result of unprecedented ‘extreme weather events’ whose consequences are quite beyond their control.

Either they are ignorant or lying or buck-passing – or all three. 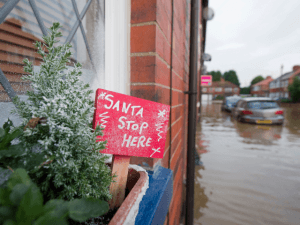 As it was in Somerset in early 2014, so it is with the floods which have ravaged the north of England (and which are fast spreading south) this year. Yes, they are indeed a man-made creation – but the people mainly responsible are the bureaucrats and green activists at the European Union whose legislation has made it illegal for Britain to take the measures necessary to reduce the risk of flooding.

British rivers have always been prone to flooding because Britain is a kingdom of rains (where royalty comes in gangs).

But traditionally, those living in flood-threatened areas have been able to mitigate the problem by making sure that their rivers are well dredged – and thus able to flow freely.

For an excellent historical perspective on this read Philip Walling’s recent piece for the Newcastle Journal, reprinted here by Paul Homewood:

…For all of recorded history, it almost went without saying that a watercourse needed to be big enough to take any water that flowed into it, otherwise it would overflow and inundate the surrounding land and houses. Every civilisation has known that, except apparently ours. It is just common sense. City authorities and, before them, manors and towns and villages, organised themselves to make sure their watercourses were cleansed, deepened and sometimes embanked to hold whatever water they had to carry away.

In nineteenth century Cockermouth they came up with an ingenious way of doing this. Any able-bodied man seeking bed and board for the night in the workhouse was required to take a shovel and wheelbarrow down to the River Derwent and fetch back two barrow-loads of gravel for mending the roads. This had the triple benefit of dredging the river, maintaining the roads and making indigent men useful.

In Cumbria they knew they had to keep the river clear of the huge quantities of gravel that were washed down from the fells, especially in times of flood. For Cumbrian rivers are notoriously quick to rise as the heavy rain that falls copiously on the High Fells rapidly runs off the thin soils and large surface area over which it falls. Cumbrian people have always known that their rivers would be subject to such sudden and often violent inundations and prepared for them by deepening and embanking their channels. Such work was taken very seriously.

So what changed? EU Regulation, that’s what. 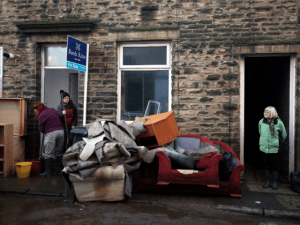 Thanks to the European Water Framework Directive – which passed into UK law in 2000 and which is enforced by the Environment Agency – the emphasis has shifted from preventing flooding to encouraging it.

Yes, you read that right.

Under EU legislation, dredging rivers is considered environmentally unfriendly because it takes them away from their “undisturbed”, “natural” state.

Instead, the emphasis shifted, in an astonishing reversal of policy, to a primary obligation to achieve ‘good ecological status’ for our national rivers. This is defined as being as close as possible to ‘undisturbed natural conditions’. ‘Heavily modified waters’, which include rivers dredged or embanked to prevent flooding, cannot, by definition, ever satisfy the terms of the directive. So, in order to comply with the obligations imposed on us by the EU we had to stop dredging and embanking and allow rivers to ‘re-connect with their floodplains’, as the currently fashionable jargon has it.

And to ensure this is done, the obligation to dredge has been shifted from the relevant statutory authority (now the Environment Agency) onto each individual landowner, at the same time making sure there are no funds for dredging. And any sand and gravel that might be removed is now classed as ‘hazardous waste’ and cannot be deposited to raise the river banks, as it used to be, but has to be carted away.

On the other hand there is an apparently inexhaustible supply of grant money available for all manner of conservation and river ‘restoration’ schemes carried out by various bodies, all of which aim to put into effect the utopian requirements of the E W F Directive to make rivers as ‘natural’ as possible.

For example, 47 rivers trusts have sprung up over the last decade, charities heavily encouraged and grant-aided by the EU, Natural England, the Environment Agency, and also by specific grants from various well-meaning bodies such as the National Lottery, water companies and county councils. The West Cumbria Rivers Trust, which is involved in the River Derwent catchment, and includes many rivers that have flooded, is a good example.

But they all have the same aim, entirely consonant with EU policy, to return rivers to their ‘natural healthy’ state, reversing any ‘straightening and modifying’ which was done in ‘a misguided attempt to get water off the land quicker’. They only think it ‘misguided’ because fast flowing water contained within its banks can scour out its bed and maybe wash out some rare crayfish or freshwater mussel, and that conflicts with their (and the EU’s) ideal of a ‘natural’ river .

Few politicians will admit this. Those who have attempted to do so – such as the former Environment Secretary Owen Paterson – have been shouted down as swivel-headed loons. After all, really, what could be more absurd than blaming the European Union of all things for a natural disaster like flooding. 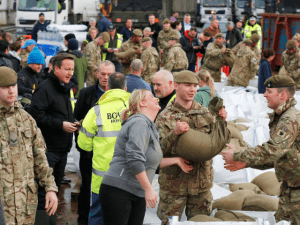 Absurd it may be but it happens to be true. Paterson dared speak out because he is openly anti-EU. Most politicians don’t – nor do any green activists – because they have a vested interest in maintaining the status quo. Of course pro-EU David Cameron is never going to admit that this mess is of the EU’s making, any more than is pro-EU shadow foreign secretary Hilary Benn.

Far easier for them to point the finger of blame at “climate change.” After all, unlike Britain’s ongoing EU membership, it is an issue conveniently beyond their control.