The latest poll figures for Swedish traditional, national conservative party the Sweden Democrats (SD) confirms the trend for their rapid growth in popularity.

Enjoying their highest ever rating in a reputable national poll, SD now command 28.8 per cent according to YouGov’s latest figures, out today. The rating puts them seven points clear of the next closest party, the centre-left Social Democrats, well out of the margin of error.

The gap has grown from five points since the last major poll in December, suggesting despite every effort by the establishment Swedish parties to freeze the SD out of public discourse the party is continuing to gain ground.

For years the SD self identified as the only party in Swedish politics who actively objected to the Swedish government’s policies of mass migration. As the migrant crisis intensified in Sweden, which has imported more humans per capita than any other in Europe, their support intensified. 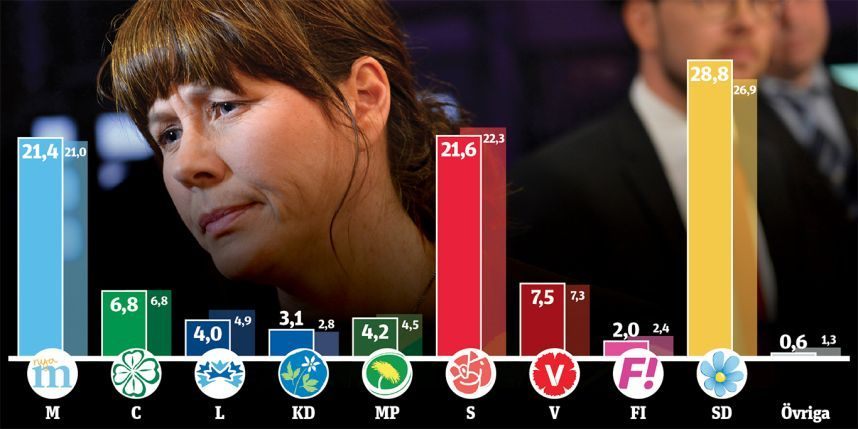 The ruling coalition, which now encompasses every party except the SD who have been excluded from government talks since last year, has moved to reduce migrant numbers in a development that may be interpreted as an attempt to head off the SD’s strengthening popularity. Yet their poll ratings continue to improve.

Breitbart London has reported on some of the ineffective measures the predominantly left-wing Swedish coalition government has implemented since the end of last year to slow the arrival of migrants, including the much-vaunted surprise border closure enacted in November. Despite the initial measures, and several tightening of the borders since the number of migrants arriving in Sweden has continued to rise.

Reports at the end of last year suggested the measures to close the borders had been deliberately hobbled by the Swedish government, with police officers given orders that prevented them from fulfilling their duties fully, and almost all migrants still being allowed to cross regardless of whether they had their papers checked or not.