The North Rhine-Westphalia (NRW) state government has released the full log of offences recorded in the city centre on New Year’s Eve, which lists in detail the forms of crimes committed, and the genders of those attacked.

With crimes ranging from mere pickpocketing to full blown “group rape”, what Germany’s Bild newspaper calls the “list of shame” runs to a staggering 821 complaints. When considering all the major cities of the NRW state including Cologne, Dusseldorf, Dortmund and Bielefeld the number of complaints is closer to 1,000. 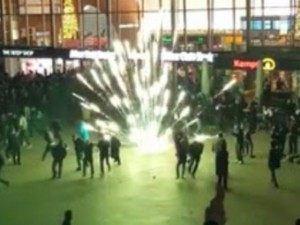 Fireworks are set off in central Cologne on New Year’s Eve. The lawless atmosphere and police paralysis set the stage for an evening of sexual violence and assaul.

In a statement to parliament today, NRW interior minister Ralf Jäger revealed although there were 1,049 victims, the police had only identified 30 suspects. All of the suspects are “North Africans”, 15 are officially asylum seekers — meaning they have not yet had their paperwork for indefinite leave to remain stamped by the German government — and two are under the age of 18.

So far, just two suspects are behind bars, 26 and 22 year old Algerians who were arrested and found to have stolen mobile phones from their victims in their possession. They stand accused of sexual offences — grabbing a woman around the waist and buttocks.

The government minister who released the list, Ralf Jäger has kept his job despite being heavily implicated in the chaos that unfolded as violent migrant gangs savagely attacked German men and women enjoying their night out on New Year’s Eve. As reported by Breitbart London at the time, the chief of police requested extra officers to be deployed to Cologne, but the appeal was turned down by minister Jäger.

Just days later the same police chief who had called for reinforcements was fired by the man who had denied them, claiming the officer had to go to improve public confidence in the force.

The Cologne migrant rapes, and concurrent attacks in other European cities has been one of the most shocking developments in the European migrant crisis this year. Beyond the attacks themselves, the initial cover up first by the Cologne police, and then by the German media which wilfully under-reported events and obscured the migrant origin of the violence has caused anger in Germany and elsewhere. The events have even imperilled the Chancellorship of Angela Merkel, who is seen in Germany as being the prime driving force behind Germany’s open door policy to millions of newcomers.

Read: The Staggering List Of Offences From Cologne’s Night Of Migrant Rape