BIRMINGHAM, United Kingdom – Patriotic Europeans Against the Islamisation of the West (PEGIDA) held their first official UK event today. Around three hundred people walked, in complete silence through the beating rain, without a single confrontation, altercation or arrest.

The march in Birmingham was part of the first Europe-wide PEGIDA event, one of 14 events happening simultaneously across the continent – in France, Germany, Hungary, and elsewhere. 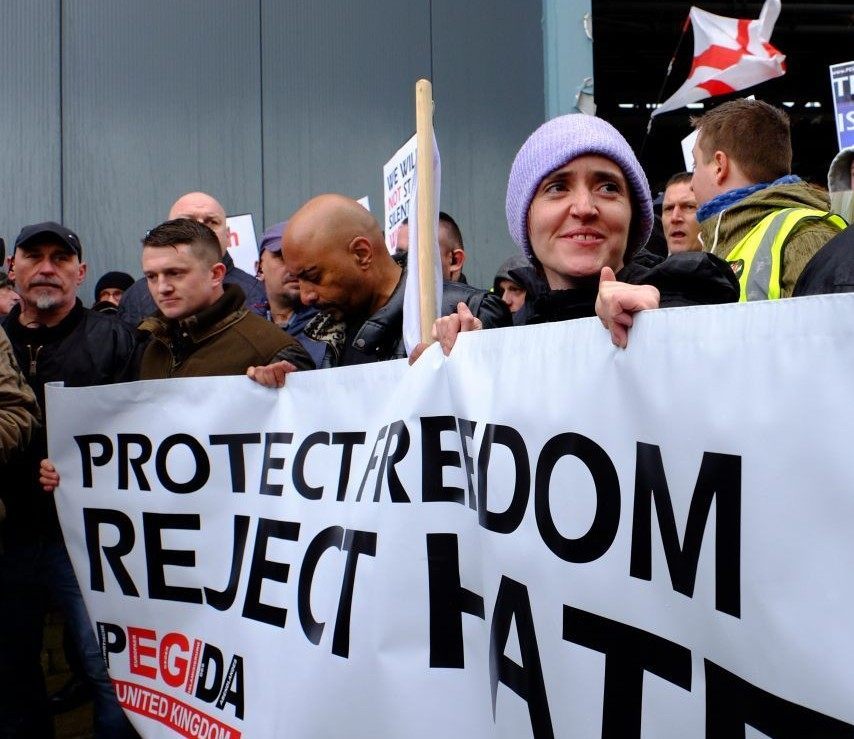 “This is not against [Asian people], this is against the ideology that Islam preaches”, declared Mohammed Fiaz, an apostate from Islam and Christian convert who addressed the PEGIDA walkers at their final meeting point.

“Who here is far right?” he asked the crowd. No one answered. “There’s one thing I want to say to the far left: where were you when people like me needed your help? People who have turned away from Islam who are being made a target,” he said.

“There are thousand like me who are in hiding… Why is that happening in the western countries, in Britain?” he asked. “Because anyone who speaks against Islam is called a racist,” he added later. “But what are they going to call me?” 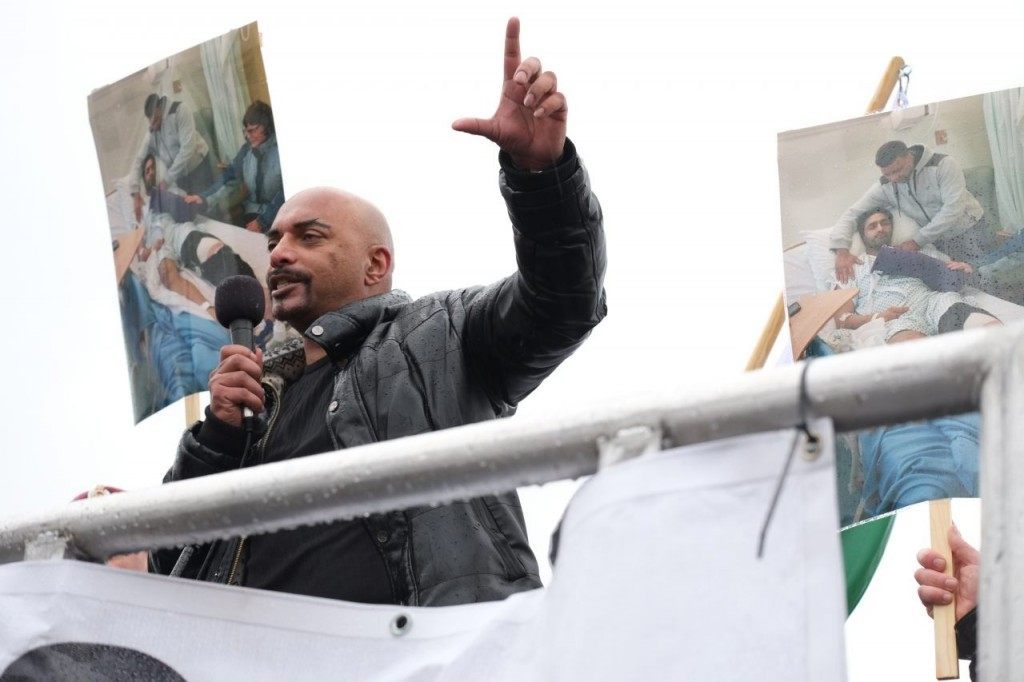 An even more unexpected face in the crowd was Trevor Philips, the equalities and diversity guru under New Labour who recently said that Muslim communities are “unlike others in Britain” and “will not integrate in the same way”.

“I didn’t say much more than ‘British Muslim tend to behave like Muslims’”, he told Breitbart London today, when asked about the comments. When asked if New Labour’s policies of multiculturalism were part of the reason that groups like PEGIDA exist today, he said: “I’m sure that people will blame me for all sorts of problems”. Mr. Philips said he was there in a “journalistic capacity” as he was filming a documentary for Channel 4. 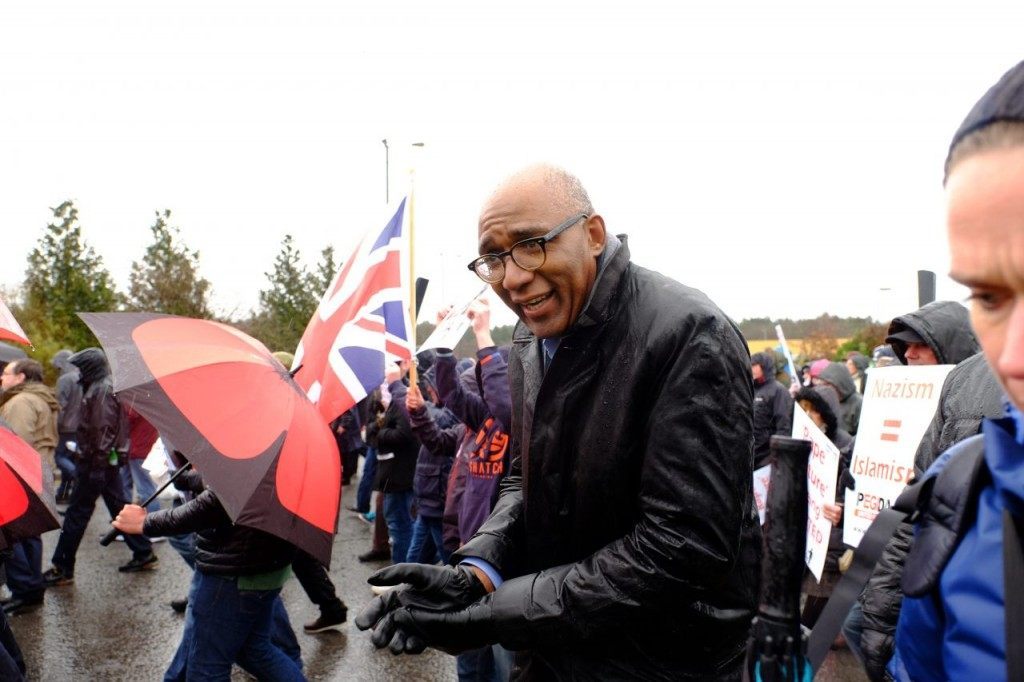 Tommy Robinson, an organiser of PEGIDA UK and the ex-leader of the English Defence League (EDL) spoke to Breitbart London as the walkers gathered. “I’m very confidant things will remain quiet and calm today,” he said. “There was some kiddy here from another group — National Action — but I kicked him straight out… the stewards have already ejected two people”.

Before the event, PEGIDA published flyers instructing groups such as the BNP and National Front to “stay away”, and distributed stickers for participants to put over their mouths, encouraging them to remain silent. They have also banned alcohol, face coverings and flags and banners representing other groups.

“Look, everyone is stood here with hot chocolates and coffees – that’s the calm atmosphere we want. It’s just a shame about the weather”, said Mr. Robinson.

Conditions were far from ideal. The rain was relentless throughout, and the wind picked up in violent bursts. It was also the first day of the Six Nations Rugby tournament “and every Birmingham local football club is at home today” Mr. Robinson added.

“But here’s the point; this is the first one. We’re going to continue to do this over and over this summer,” he said. 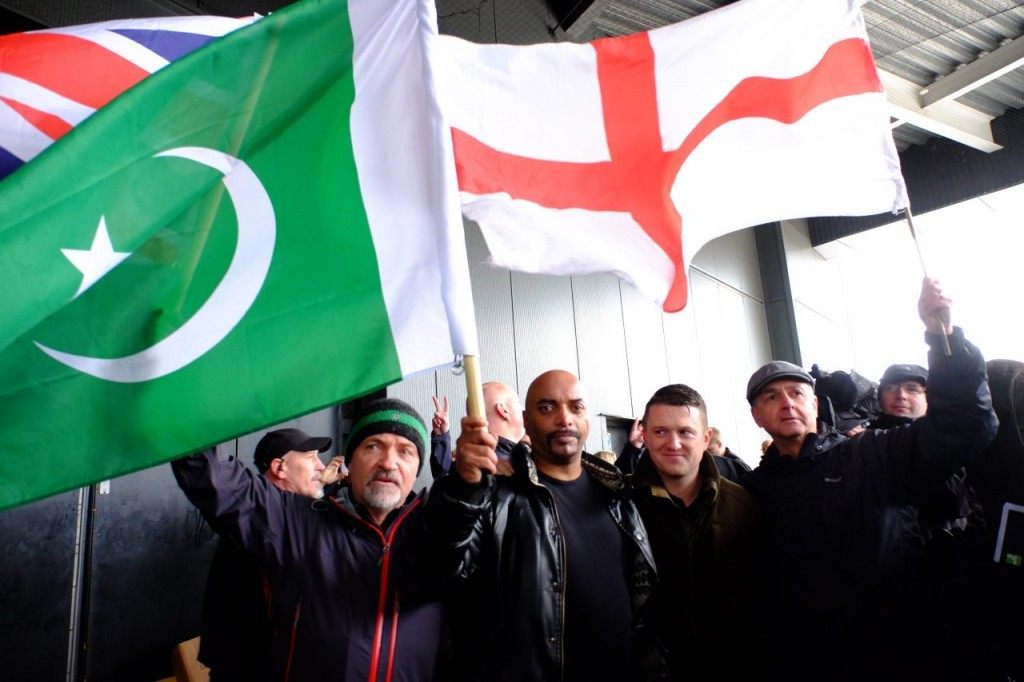 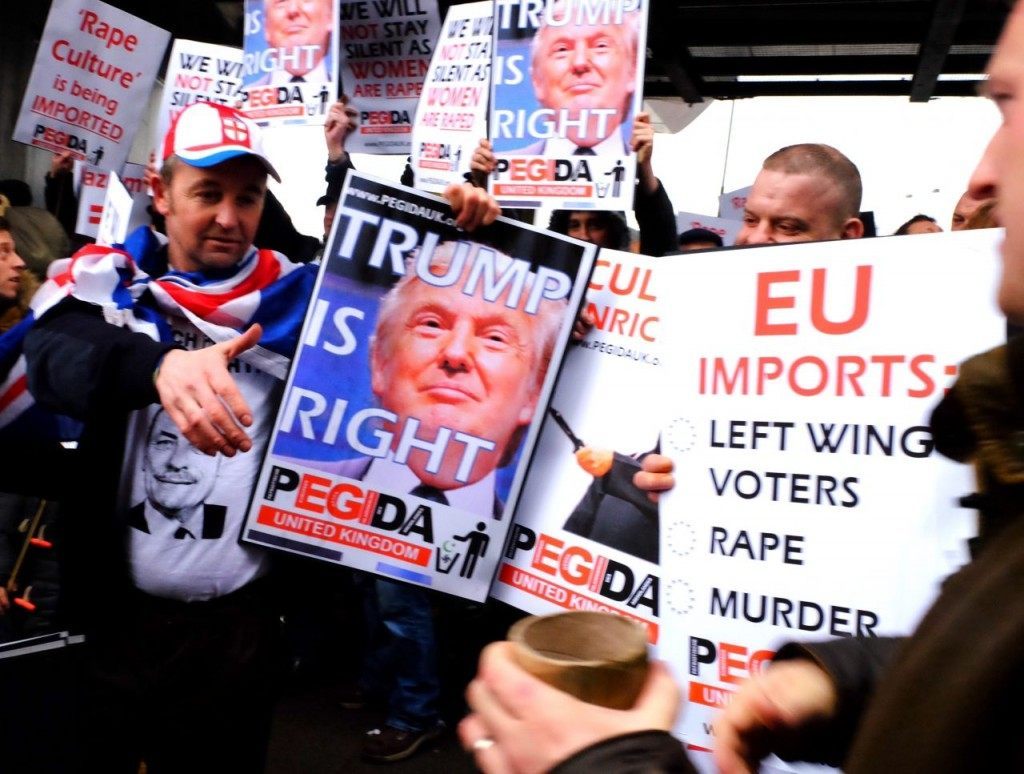 The event was advertised as happening in Birmingham, but actually took place in neighbouring Solihull, around six miles from the city centre. It kicked off near Birmingham International railway station at 1pm, before moving on to the demo point at Starley Way.

“Same EDL, same racists, less booze” touted the Midlands Anti-Fascist Network on their posters for the counter-demo. However, the isolated position and rigorous planning appeared to work, and the event felt far away from the heated days of the EDL and more like the picture we’ve seen of family-friendly PEGIDA events in Germany. 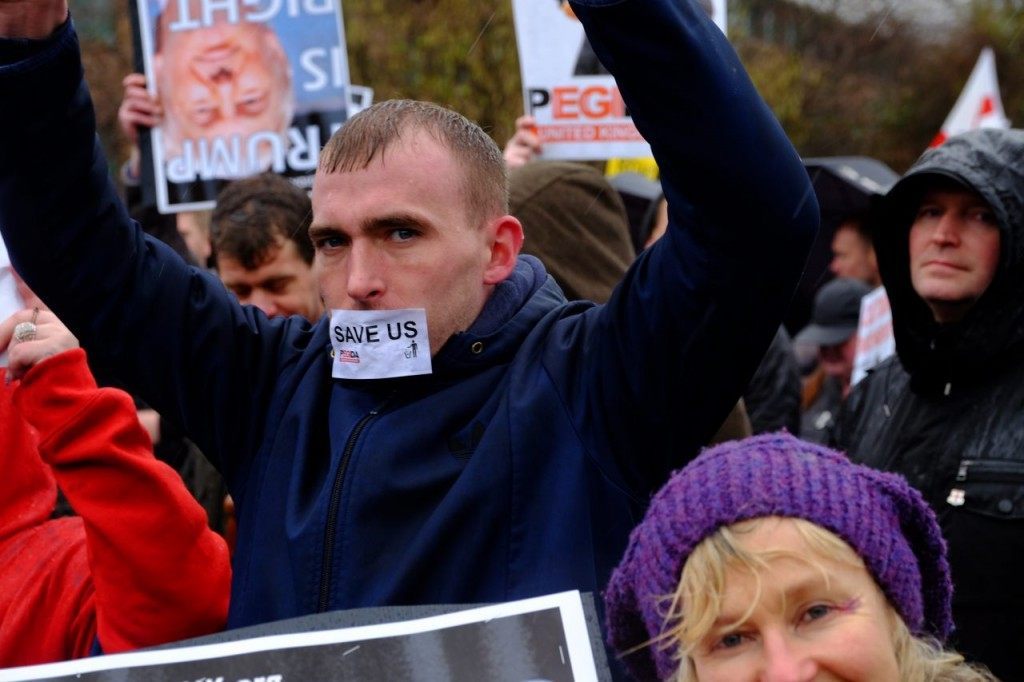 A group of about 30 counter-demonstrators holding “no to racism signs” had made it to the train station, just yards from the PEGIDA walkers. “They announced it this morning by text, that they would be coming here,” said a policeman stood next to them.

“We wouldn’t be allowed to do that”, said Mr. Robinson. “But this is always the way… these people can turn up with balaclavas and attack police officers. But we’re pro police, pro establishment, and pro monarch. We’re the good guys,” he said.

“These people — Communists and Marxists — they hate freedom. They wish to enforce their views on every one else. Communism is Islam without Muhammad,” said Mr. Robinson. 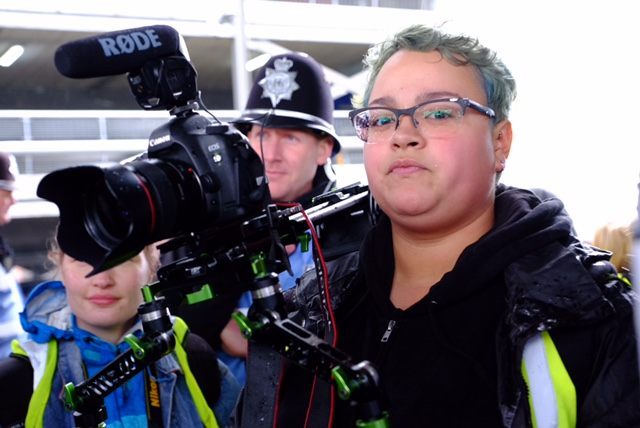 “An ‘art student’ and ‘journalist’

The small group of left-wingers had no effect, and was largely ignored. A group of about ten “art students” from Bristol, however, made it right into the middle of the PEGIDA crowd posing as journalists.

They claimed to be making an “educational documentary”, but the PEGIDA stewards suspected they were activists, pointing out that they wore “refugees are welcome” badges and kept asking about “rising Islamophobia” and the “far right”.

“He’s got the refugees badge, and he was starting to cause trouble and cause an argument”, one of the stewards told Breitbart London. “Us stewards have respectfully asked the police if they can remove him from the site… if it was a member of this group in their group he would have been ejected by now,” he said.

Once again, however, the “students” were largely ignored and things continued peacefully. 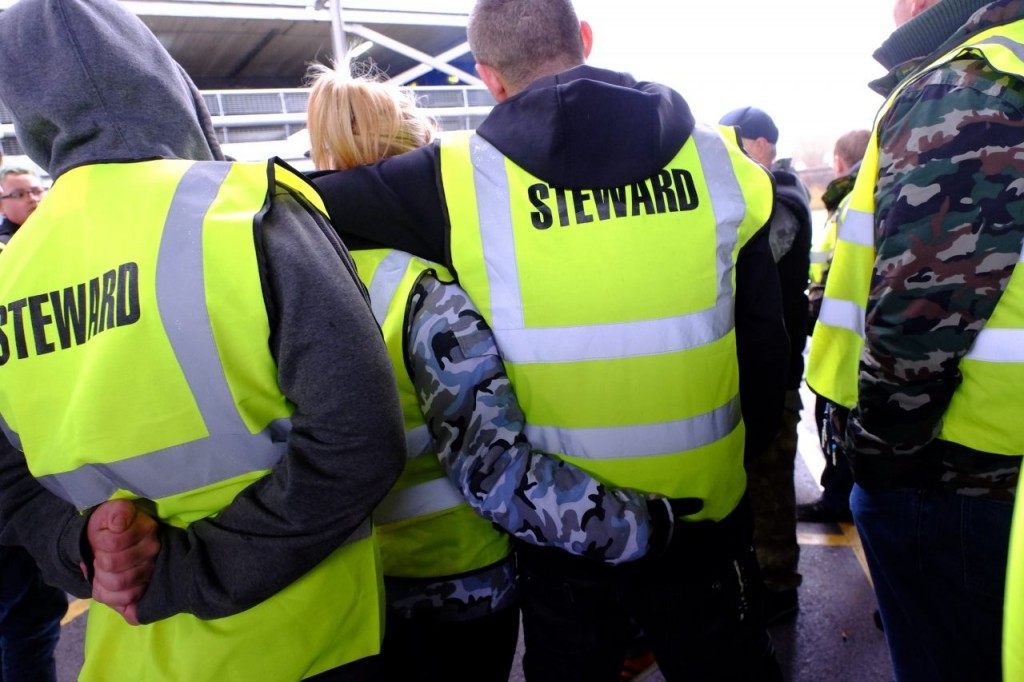 “It’s sad that we had to come out into the middle nowhere to show ourselves for what we are, and to make sure that bottles and bricks are not raining in on us”, said Tommy Robinson in his speech at the end.

“The idea of today is to give us a voice. Many people in this country are sat on the fence about this issue right now. They want to see what happens. Let them know what happened today.

“We were civilised, we walked in complete silence, we exercised our freedom of speech and showed solidarity across Europe. No racism, no hate, no inciting violence, no hooliganism. 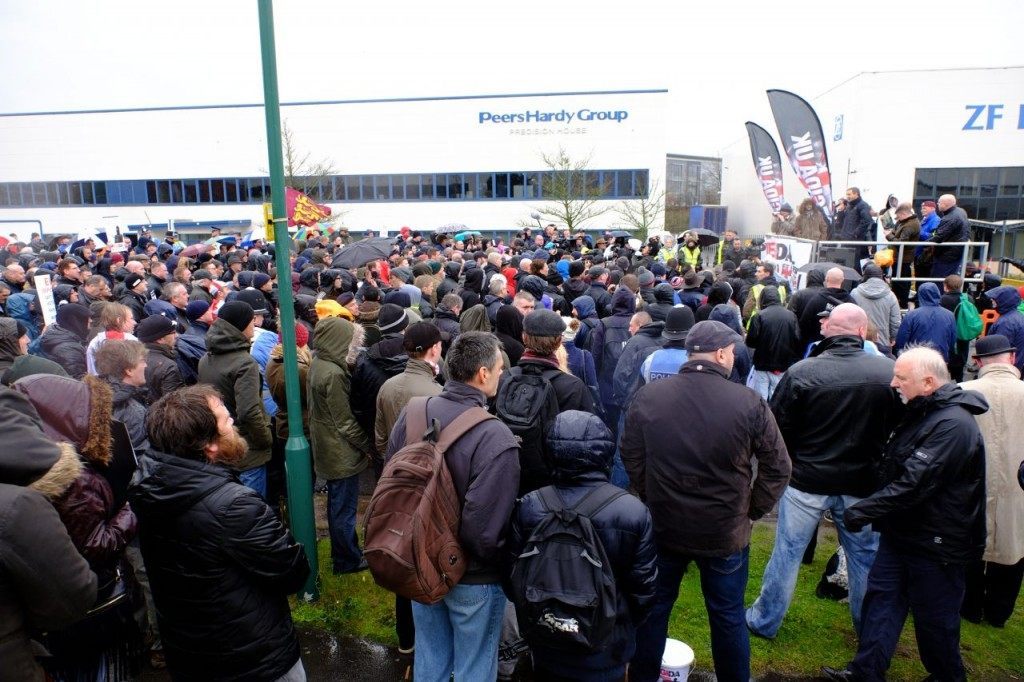 The ‘Birmingham Unites’ official counter event, organised by Stand Up To Racism and Unite Against Fascism, met in Victoria Square, in the city centre.

It was supported by the National Union of Teachers (NUT), LGBT+ Against Islamophobia, Unison union, Momentum (Jeremy Corbyn’s group in Labour), and the Birmingham Central Mosque – who are currently facing serious allegations of sexism.

Ex-Respect party leader and hard left activist and anti-racism campaigner Salma Yaqoob stated: “Birmingham is a diverse and multicultural city and we are proud of this. We stand against PEGIDA and their racist, Islamophobic and fascist views.

“Only twenty years ago, we had a genocide of Muslims in Europe, which began with a campaign of dehumanising the Islamic community through propaganda and hate. Today, PEGIDA and other far-right groups are attempting to bring division to our city but we shall stand united. In contrast to the hate propaganda of PEGIDA, we shall be celebrating the richness and strength in our unity through music, food, and speeches.

“Only a week after Holocaust Memorial Day, we must send a clear message that there is no place for fascism on our streets, and solidarity and good will between people of all backgrounds, races, orientations, genders, abilities and faiths is what makes Birmingham and Britain a better place.” 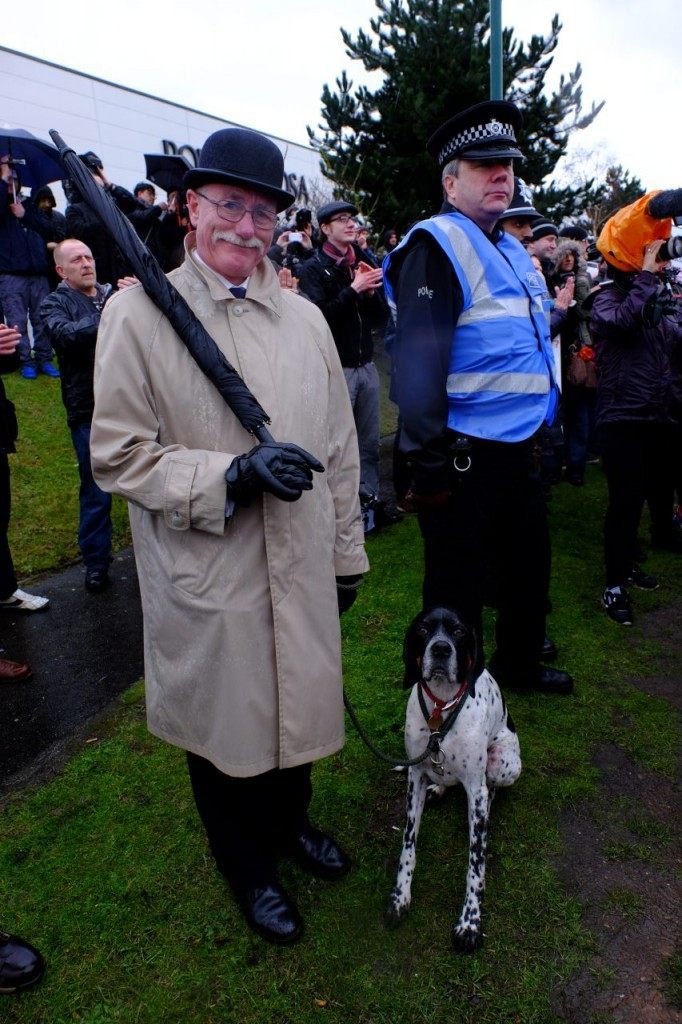 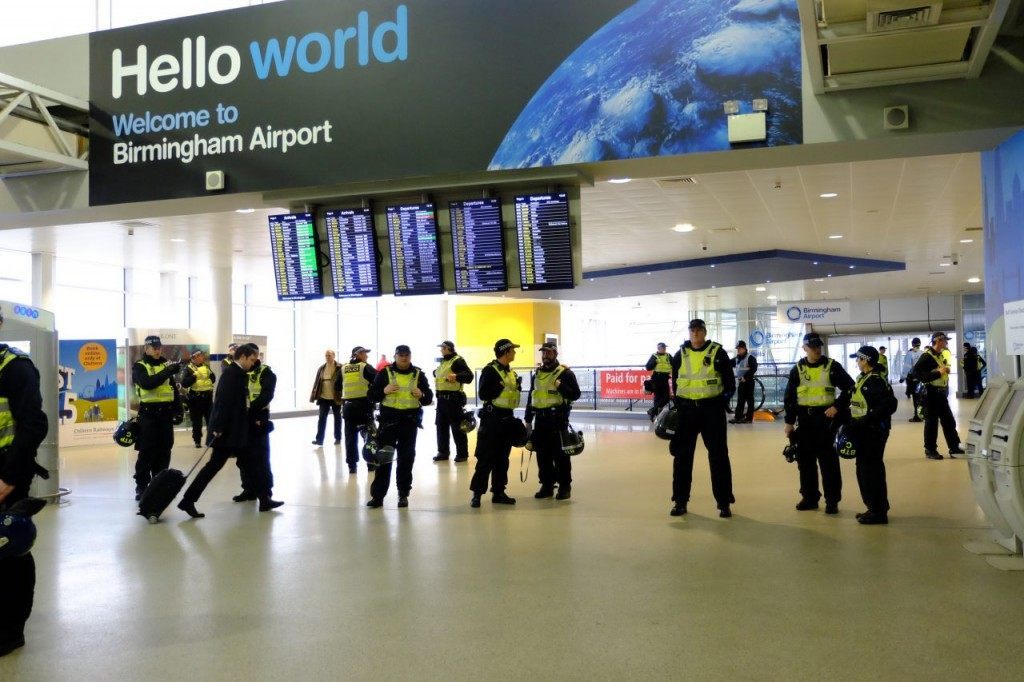 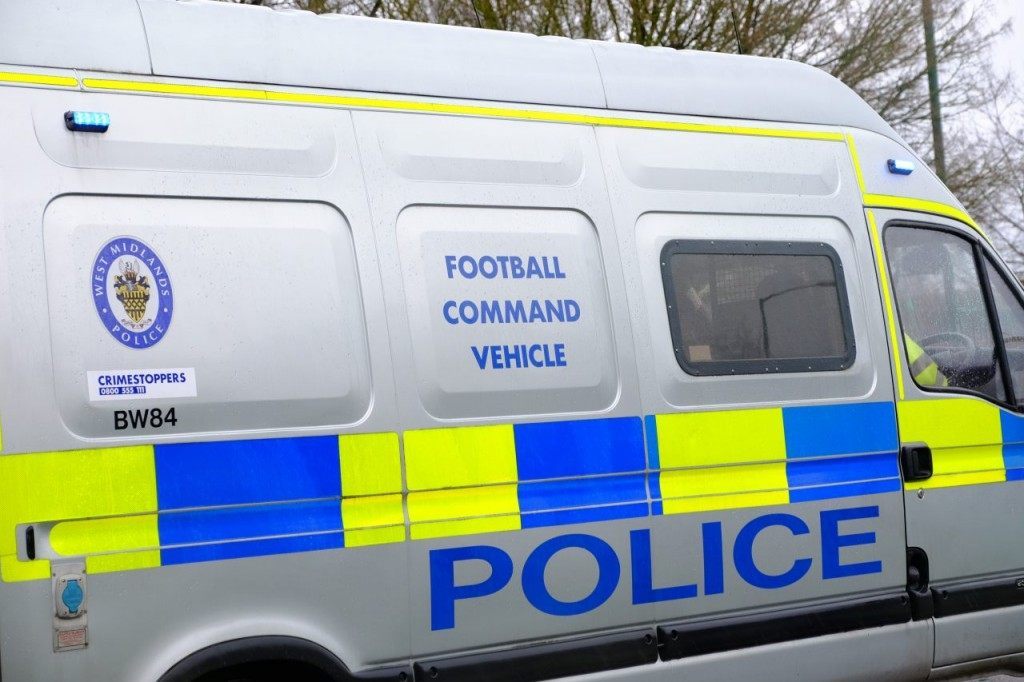 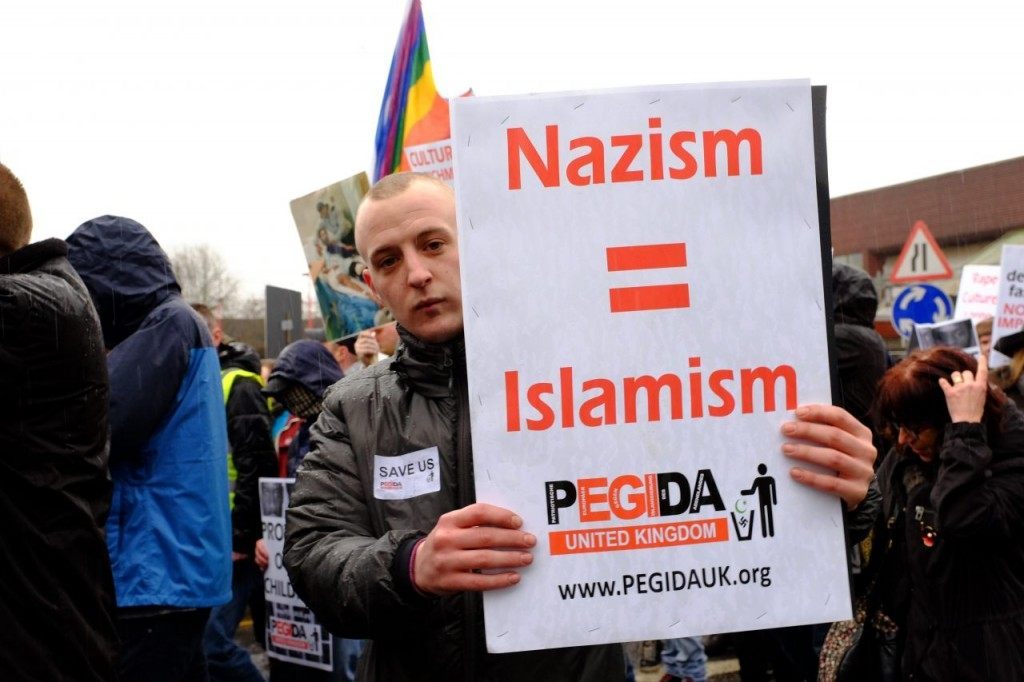 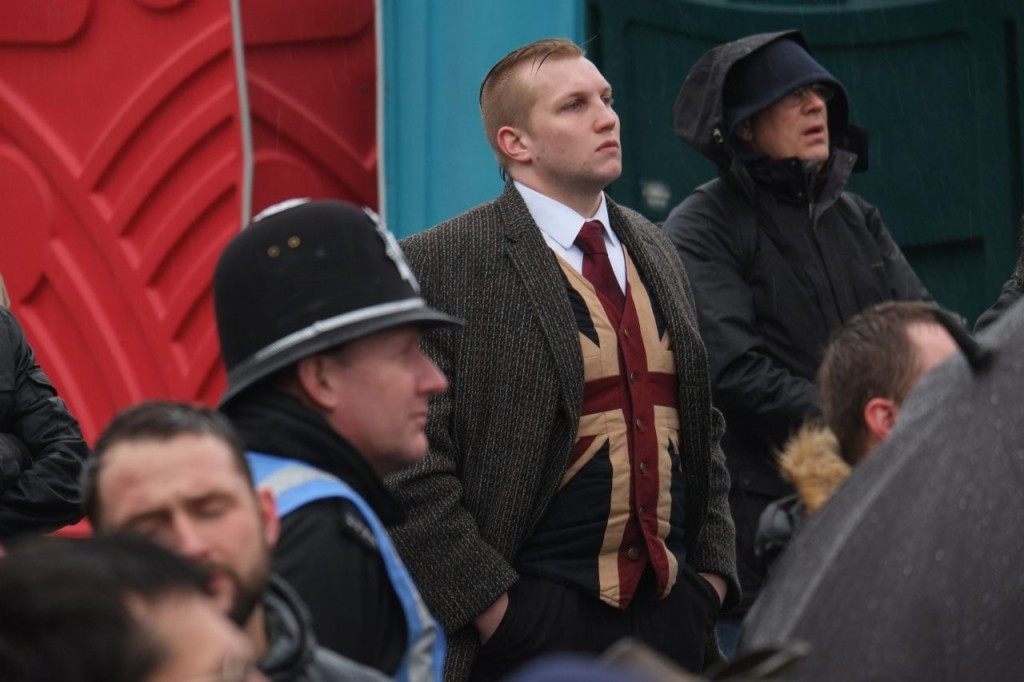 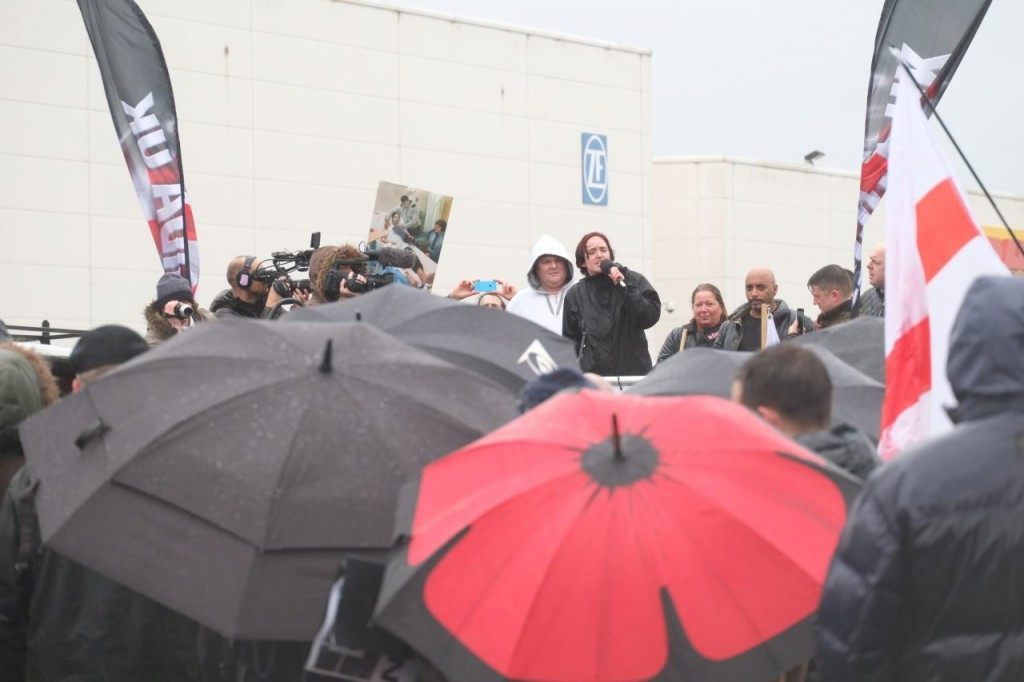 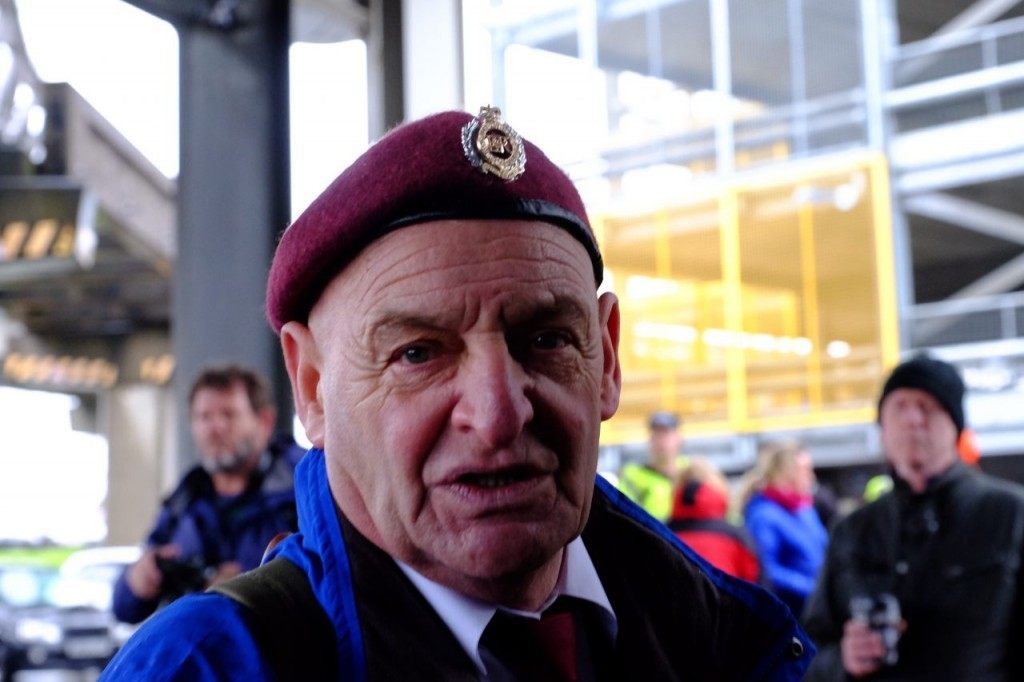 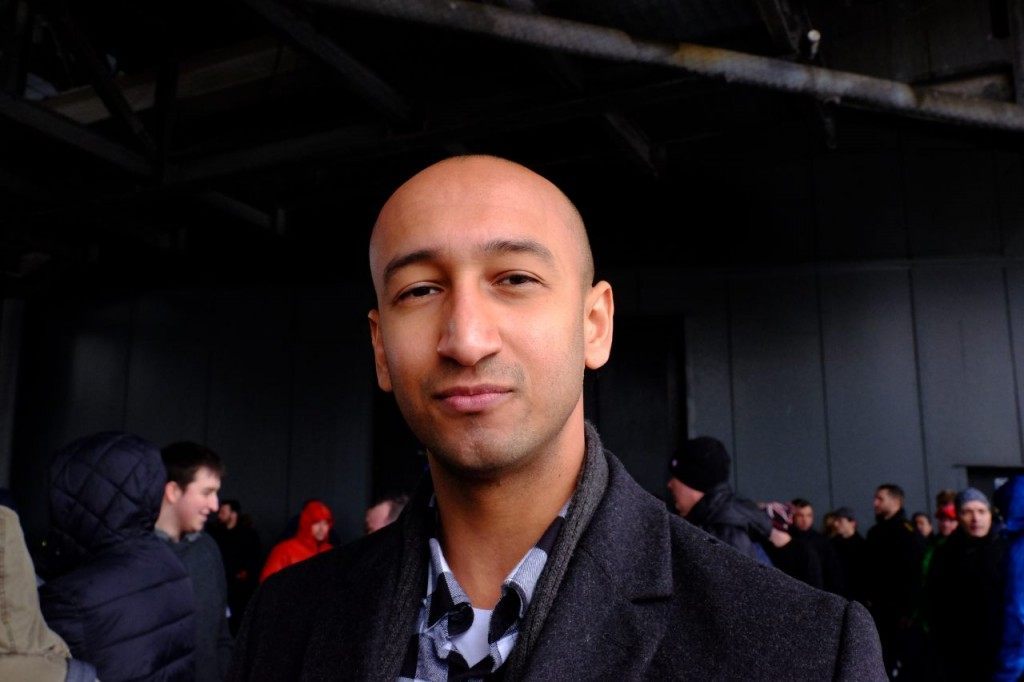 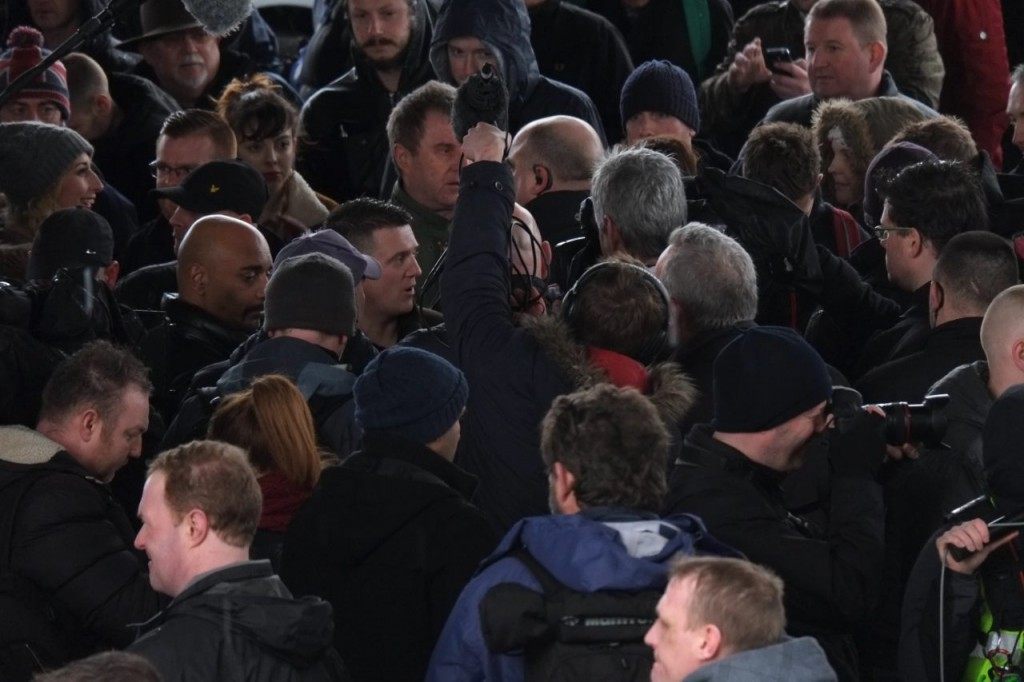 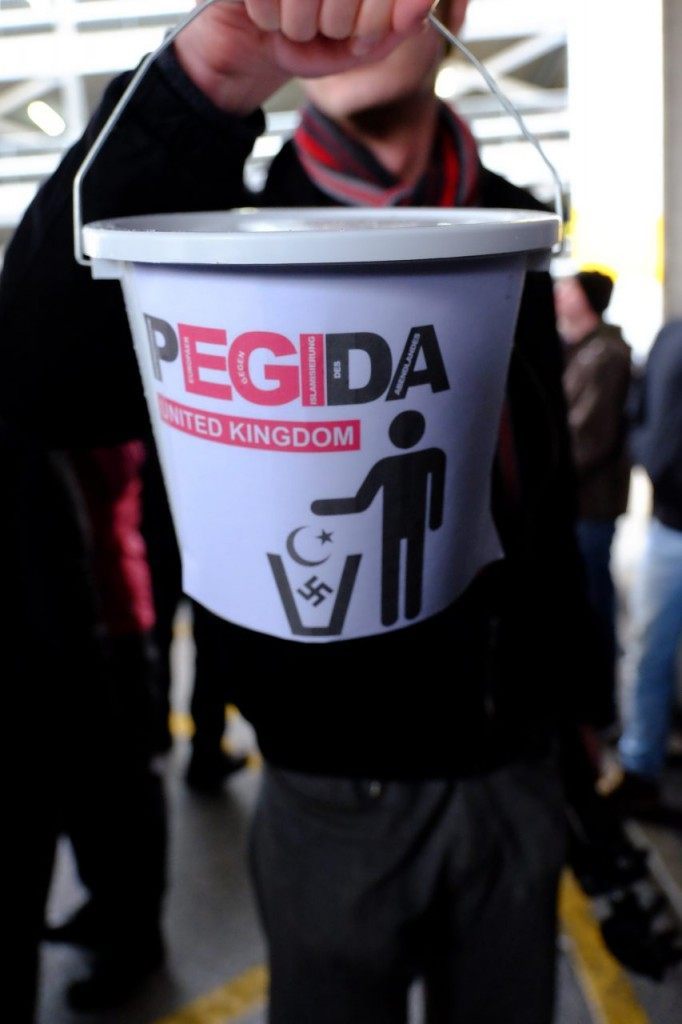 All photos by Rachel Megawhatt for Breitbart London