Mainstream media outlets have been blasted for peddling “total nonsense” today as left-wing newspapers coalesced to claim with one voice that “only three” of the suspects involved in Cologne’s mass migrant rape on New Year’s Eve were recent migrants or refugees. 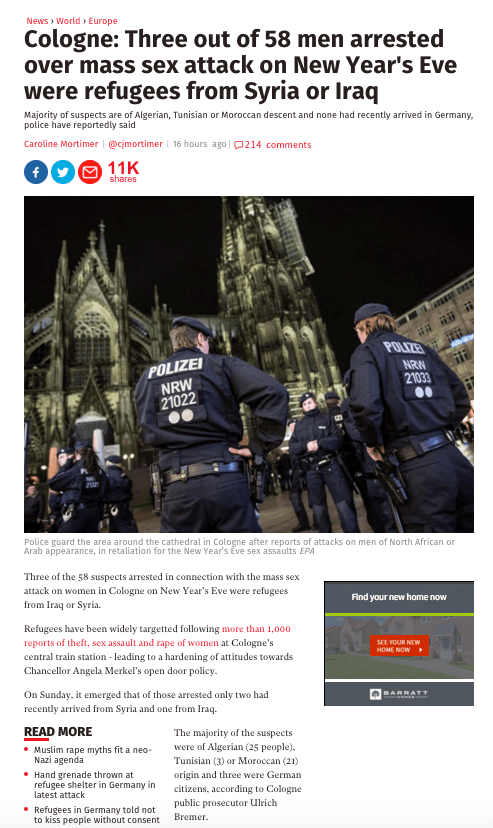 But Cologne’s prosecutor, Ulrich Bremer, has said that the claim is “total nonsense” after an interview with German paper Die Welt this weekend was misinterpreted and reported in a way that the left-wing outlets wanted, rather than what the truth was.

The Huffington Post, the Independent, the Metro, and Russia Today all jumped on clumsy reporting from liberal outlets on the European continent, going so far as to heavily editorialise their news copy on the issue.

The Huffington Post claimed: “two Syrians and one Iraqi had been detained by police as part of their inquiries, contrary to the hysteria caused by headlines which accused hordes of refugees of masterminding the assault,” while the Independent, which recently announced it was going “online only” due to a slump in newspaper sales, exclaimed: “Majority of suspects are of Algerian, Tunisian or Moroccan descent and none had recently arrived in Germany, police have reportedly said”.

The HuffPo’s tweets were titled: “The Facts Behind Cologne Sex Attacks Make Awkward Reading For Refugee-Bashers”.

But police said no such thing, with the Associated Press clarifying the statement from Bremer, who has clarified: “the overwhelming majority of persons fall into the general category of refugees.”

The papers are thought to have made the error because they do not understand the migrant crisis – thinking that only Syrians and Iraqis count as migrants or refugees, when an overwhelming number of Algerians and Moroccans had been named amongst the Cologne suspects.

But thousands of Algerians, Moroccans, Tunisians, and dozens of other nationalities have arrived in Europe since the migrant crisis began in earnest in early 2015.

And news outlets weren’t the only ones to fall for the shoddy reporting of Mr. Bremer’s comments. The “news” was seized upon by open borders campaigners, broadcasters, and even government agencies. 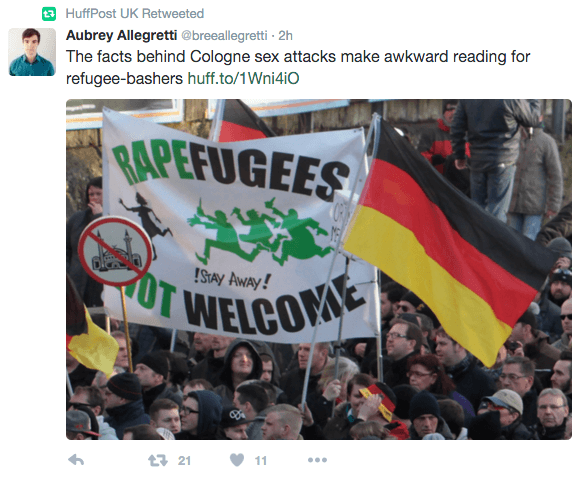 Only three out of 58 men arrested for Cologne sex attacks were refugees https://t.co/IQAeoPoyIe

What will British media do with this? 58 arrests over Cologne attacks: 3 refugees; 3 German; 52 Moroccan/Algerian https://t.co/InxiSieHEa

Despite all the demagoguery, only 3 of the 58 Cologne attackers identified were refugees. https://t.co/CImp5298Qs pic.twitter.com/s7PZZwwpPG

Sunny Hundal, a journalism lecturer at Kingston University currently being looked at by the Metropolitan Police for racist, anti-white tweets, said:

The piece itself would likely make no sense either way, as Tunisian and Algerian migrants are just as likely to be Muslim as Iraqi or Syrians.

Ms. Ramdani writes for the Guardian, the Independent, London’s Evening Standard, the Mirror, the Telegraph, the Daily Mail, the Sunday Times, the New York Times and the BBC and Sky.

The media-wide mishap comes after it took Breitbart London to break the news of the mass Cologne rapes and theft on New Year’s Eve for the English speaking world. Since then, news outlets have rushed to play catch up, posting fake videos, and even blocking their own content in European countries.