The leaders of the European Union’s (EU’s) easternmost countries have called for a ‘Plan B’ on migration, warning that the whole European project could be at risk unless swift and decisive action is taken to stem the migrant flow.

With spring fast approaching and expected to bring with it a new wave of migration, the leaders of the Visegrad Group – Hungary, Poland, Slovakia and the Czech Republic – have insisted that an alternative plan must be in place by the time of the next European Council meeting in mid-March, to be ready to be put into action if the measures currently proposed have still not gone ahead.

If no decisive measures are in place by then, the states have agreed to help Bulgaria and Macedonia with securing their borders despite neither of the two states being within the Schengen ‘borderless’ Zone (Macedonia isn’t even in the European Union). Although the Visegrad states are officially delaying assisting their southern neighbours until a European response is formulated, Hungary has already sent personnel to Macedonia to assist with border patrols, while Slovakia has offered 300 policemen.

Meeting together with the Bulgarian and Macedonian leaders in Prague on the 25th anniversary of the group’s founding, the Visegrad leaders confirmed their commitment to a joint European response to the crisis. However, they lamented the slow progress being made on current proposals to bring the migrant flow under control.

Specifically, they called for “swift adoption” of proposals already on the table for a joint European Border and Coast Guard, and “rapid and credible” results from the deal with Turkey to do more to stop migrant leaving Turkish shores. The Union has already begun to pay out an agreed €3 billion to Turkey in exchange for a Turkish commitment to tackle people smuggling gangs and people traffickers.

“Progress in these two areas will be decisive in the management of migration flows in the upcoming weeks,” the leaders said in a joint statement.

They have also called for more to be done to address the underlying problems behind the migrant flow, “including ending of war in Syria”. In fact, just four in ten of the migrants crossing the Mediterranean into Europe are Syrians, according to United Nations figures.

And the leaders have insisted that more attention must be paid to securing the borders around the Balkans, an area which has been hard hit by the flow of migrants northwards, and to helping Greece better control her own borders.

“Unless we put the decisive steps rapidly into practice and thus improve the management of the most exposed parts of the European Union’s external borders and stem the migratory flow, the situation risks deteriorating beyond our control,” the leaders warned.

“Such a development would put the cornerstones of the European integration, especially Schengen and the principle of free movement, at risk. Stepping back in this area would question the very foundations of the European Union and would have strong negative economic, social and symbolic impacts.” 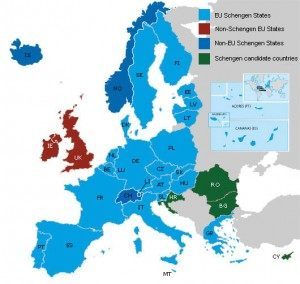 The Schengen Zone as it currently stands.

Greece has already been put on probation and threatened with expulsion from the Schengen zone unless she can gain control over her borders within the next three months. But with the state essentially bankrupt, and a coastline that stretches some 8,500 miles thanks to the numerous islands held by the nation, that scenario is thought to be unlikely.

If Greece does fall out of the Schengen Zone, the outer border will shift northwards, putting Hungary on the front line.

The joint statement of commitment to a pan-EU solution belies comments made by the Eastern leaders individually.

Hungary’s Prime Minister Victor Orban has been a particularly outspoken critic of the open-door immigration policy currently being pursued by the European Union and championed by the German Chancellor Angela Merkel.

He has already suggested that the migrant invasion may be a “left wing plot” to fill the region with sympathetic voters, and this week accused Germany and Turkey of a secret deal to import half a million migrants into Germany and then disperse them across the Union.

“Hungary’s position is that what Europe has done so far is a failure, has led to trouble, terrorism, violence and fear,” Orban said.

Likewise, criticising Merkel’s open invitation to Syrian migrants last summer, Orban’s colleague, Slovak Prime Minister Rober Fico said: “It wasn’t us who invited migrants to our territory and it wasn’t us who destabilised the countries from which these people come.

“Certain European politicians made big mistakes in the migrant crisis.”