A senior Tunisian police commander has been seconded to the Cologne force, commanding up to 100 German officers in a fight-back against immigrant criminals who have been terrorising the city. 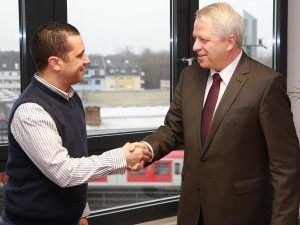 Police academy director Major Emir Gharbi, an expert in breaking pick-pocketing rings, has been embedded in the North Rhine-Westphalia force since Tuesday this week as part of an effort by Cologne police to combat the imported crime wave. Local police have been seen to be on the back foot since the migrant sex attacks on New Year’s Eve which saw thousands of crimes committed and officers unable to react.

A Cologne police commissioner expressed his delight at the support from North Africa, telling press: “It is advantageous for our work, if we can rely on a colleague who knows the language and culture of the people with whom we often deal”.

Major Gharbi commanded a 100-officer raid on Cologne’s Kalk district on Wednesday night leading to six arrests, reports the Kölner Stadt-Anzeiger. Plainclothes and uniformed officers stormed internet cafes, bars, and casinos in the neighbourhood, and the street were cordoned off allowing immigration officials to inspect the people frequenting the area.

Speaking to press after the raid, the Cologne police director of operations explained this was the fourth raid on the area in the past couple of weeks, and that the Kalk neighbourhood is a recognised centre for migrant crime. Not only are these criminals found here overwhelmingly more than in other parts of the city, but the officer stated the perpetrators of the Cologne New Year’s attacks are thought to be primarily from the area.

Breitbart London has recently reported on Cologne’s Kalk neighbourhood, as the home of the radical Salafist mosque whose Imam went on the record after the New Year’s attacks to say “the events of New Year’s Eve were the girls’ own fault”. Remarking that the way Western women dressed did nothing but add “fuel to the fire”, Imam Sami Abu-Yusuf said their being “half naked and wearing perfume” had caused the sex attacks.

It is the special skills of Major Gharbi that come into play in this significantly immigrant neighbourhood. In Wednesday’s raid, the officer accompanied migration bureau officials into a Moroccan cafe where the patrons and staff were asked to identify themselves. When one customer protested in broken German that he was unable to understand the orders being given by police, Major Gharbi responded in Arabic: “That’s no problem, you can talk in their native language with me – you must identify yourself”.

German news magazine Focus reports Major Gharbi is enjoying his time in Cologne, telling the publication “The work is fun”. He also expressed surprise at how kindly German police treated his fellow countrymen when they were being dealt with, remarking they were seen with “a lot of respect”.

Major Gharbi will remain on the Cologne force for three weeks, at which point he will be replaced with another foreign crime expert from Morocco.