The Netherlands branch of the Patriotic Europeans Against the Islamisation of the West (PEGIDA) has turned out in support of Dutch campaigner Geert Wilders as he is tried under hate-crime laws for anti mass migration comments made two years ago.

Campaigners gathered outside Schiphol Airport’s high-security courtroom this morning as Dutch Party for Freedom (PVV) leader Geert Wilders was whisked through the 15-foot security gates in a blacked-out car. 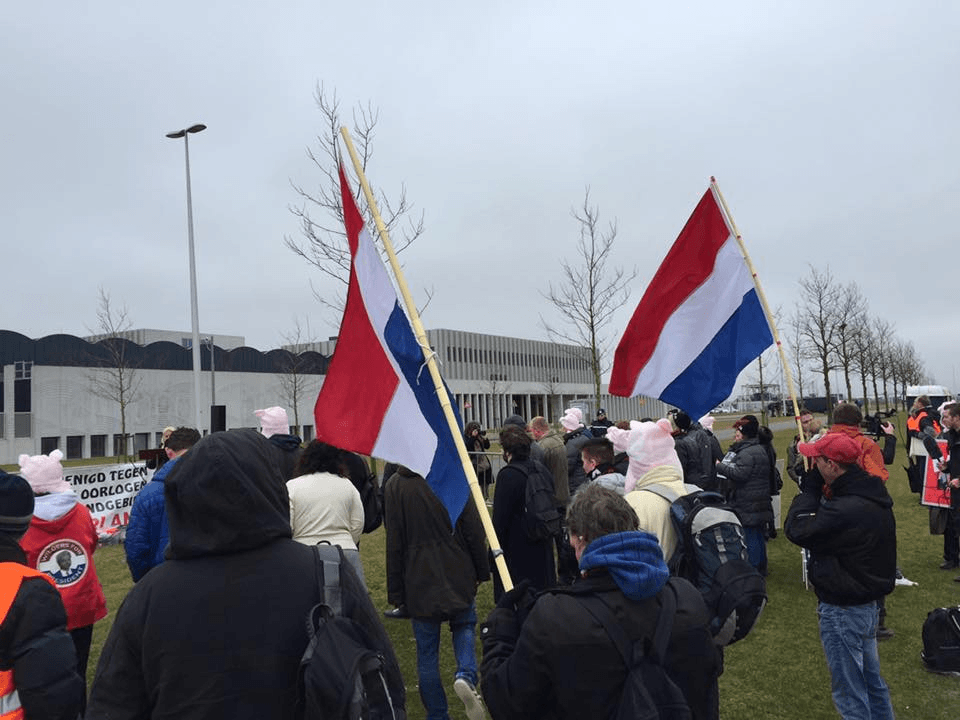 The veteran campaigner, who lives under constant watch by personal security in response to several threats against his life by radical Islamists is on trial for asking at a public meeting in 2014 whether his supporters would like to see less Moroccans in the Netherlands. The Dutch prosecutor has accused him of “insulting a group” and inciting hatred and discrimination.

On my way to court in police escort. No one will silence me. No terrorist, no prime minister and no court either.

The PEGIDA movement places an emphasis on good natured protests, and dozens of supporters were photographed wearing knitted piglet hats — a sign of defiance against political Islam — waving Dutch flags, and holding placards.

The daily danger to Mr. Wilder’s life and the high-profile nature of the case means Dutch military police have been stationed outside the court today, and have been searching all cars approaching the site. Six arrests were made after three cars were found to contain pepper spray and knives. The Dutch Public Broadcast Company reports the motives of those arrested is presently unclear and it is unknown whether the armed men were supporters of Mr. Wilders or his enemies.

PEGIDA released a statement Friday morning stating the arrested men were nothing to do with the pro-Wilders movement, and suggested they may have been linked to an activist movement known as the Dutch Self Defence Army (DSDA). The DSDA themselves have stated today their vehicles were deliberately targeted by security forces and reports of knives having been found are spurious.