Thousands of hard-left, ‘anti-racism’ protesters have been bused into London today by a wide array of groups including the British equivalent of ‘Black Lives Matter’, trades unions, Muslim pressure groups, and senior Labour Party representatives.

The groups have claimed that they are protesting today on #M19 (March 19th) in solidarity with European Anti-Racism Day, however many of the speeches have been more about special interests, privilege, and other off topic information. Attendees include terrorist sympathisers. 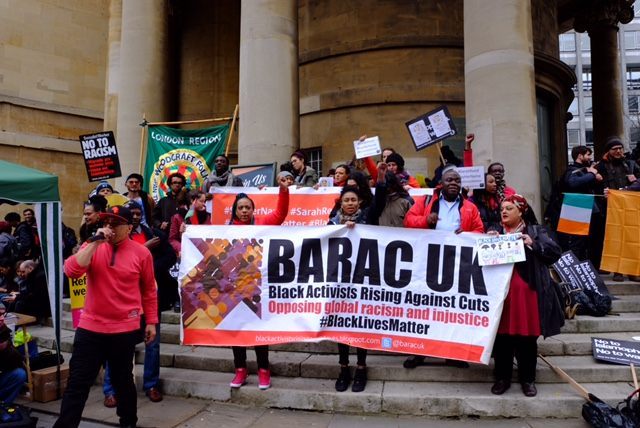 “All you Muslim people, LGBT people and black people uniting against what? Racism! Are you with me?” opened Lee Jasper, a race relations activist and politician, who served as Senior Policy Advisor on Equalities to the former Mayor of London Ken Livingstone.

He Continued: “Black lives matter ya know… Black women are invisible you know, and its our duty to raise them up and support all victims of racism.

“On our side today, we’ve been marching with the black lives matter block on this demonstration. Which is, God willing, representing the people on the street”, he explained.

“If I could just ask you to say ‘Black Lives Matter’?” he chanted. “Whose lives matter? Black lives matter?” he cried.

“I know there are some white people that not quite sure what to do right now. Well, let me tell you, that the human race was born in Africa, so by way of association I’m deeming you all Africans… Black lives matter!” he continued chanting.

Comedian Jeremy Hardy: It’s boring being white, I have no more claim to Britain than anyone else: 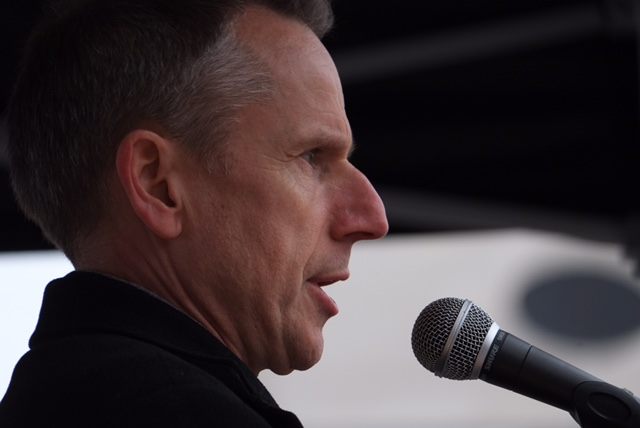 “I’ve made London my home and I’m proud to be an adoptive Londoner… A few days ago I was in the Calais refugee camp. I was sitting in a shack, a rudimentary shack, with men who had sewn their lips together on hunger strike.”

“Some are economic migrants… but we should be proud they all want to come here”, he proclaimed, adding later:  “People say white people are in danger of becoming a minority in London. Well, I am one of the whitest people you will ever meet. I’ve done my family tree. I thought ‘this will be interesting’. It f*cking wasn’t. 200 year of white people from the South East of England.

This could apply to just about any rally, anywhere:

‘Down with this sort of thing!’
A protester at London’s #m19 rally offers a cogent message. pic.twitter.com/rAGBXuplWx

Video: “Tories out, refugees in”:

Just heard a ‘Tories out, refugees in’ speech at the London #M19 rally, but not a lot of people heard. pic.twitter.com/iiMOEdMYJ0

“Refugees are welcome here! We have had the abuse and denigration of refugees and migrants over the years, and it has reached a crescendo with this European referendum.

“It is a shame on this country that refugees are forced to live in squalor in camps in Calais and Greece. It is appalling the way the countries of Europe want to turn their backs!”

She added: “The conditions those people are living in brings shame of the European family of nations.”

“We are rallying against racism; against fascism; against Islamophobia; AND against anti-Semitism,” she stressed.

“Because you know, the left has been at the forefront of the fight against anti-Semitism almost from its beginning… We will not take lectures from right wing newspapers that supported Hitler during the Second World War on fighting anti-Semitism,” she said, referring to the widely reported rise in anti-Semitism in the Labour party and the left in general since Jeremy Corbyn rose to power.

In December last year Labour was forced to expel a prominent member who promoted racist myths of a wealthy, international Jewish conspiracy; last month one of the leaders of the influential Oxford University Labour Club quit because Corbynite members had “some sort of problem with the Jews”; and just days ago a party member who referred to “fascist” Jews with “big noses” was expelled.

“We have always done it [opposed Anti-Semitism] and we will continue to do it,” she claimed.

Stick around for some crazy quotes… 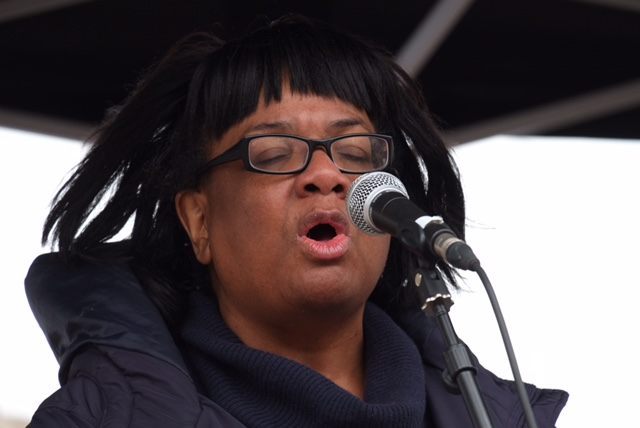 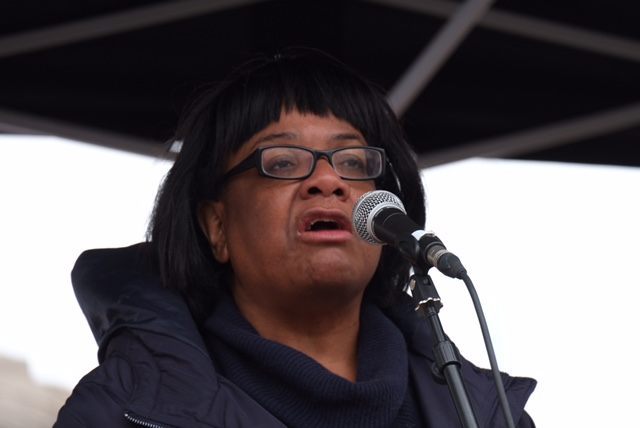 Sensing a theme among the supporters of London’s #m19 rally. pic.twitter.com/H7XCwvOKbb

The #m19 London march is now a rally in Trafalgar Square, but it is rather smaller than hoped for by organisers. pic.twitter.com/VCcGeACaQa

Not expected at #m19 march in London!
Told us: “Don’t blame Europe, it isn’t failing, this is a global problem.” pic.twitter.com/caXr2VgZI2

Seems to be a common theme at the #m19 March in London. pic.twitter.com/7kFyH2oB3M

A handful of #blacklivesmatter marchers in London for #m19. pic.twitter.com/2AvlGyqTNt

“As a socialist, unity of the oppressed is what should matter…”#m19 pic.twitter.com/UkkxsnKFQr

Clashes between demonstrators and Britain First on Oxford Street: 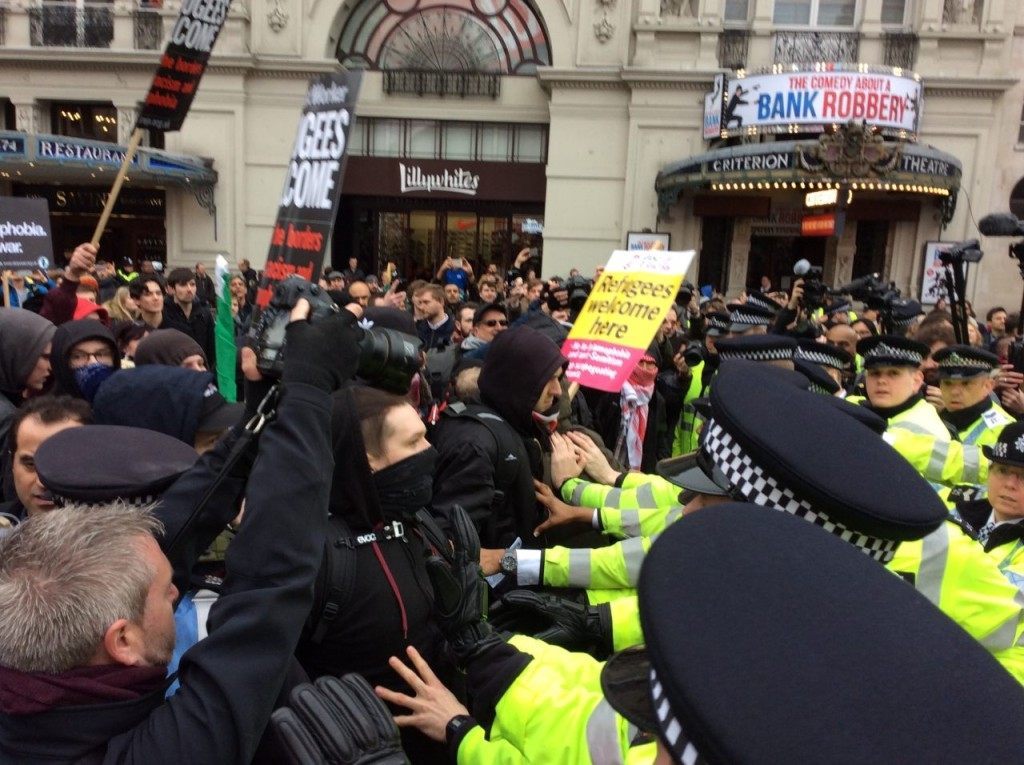 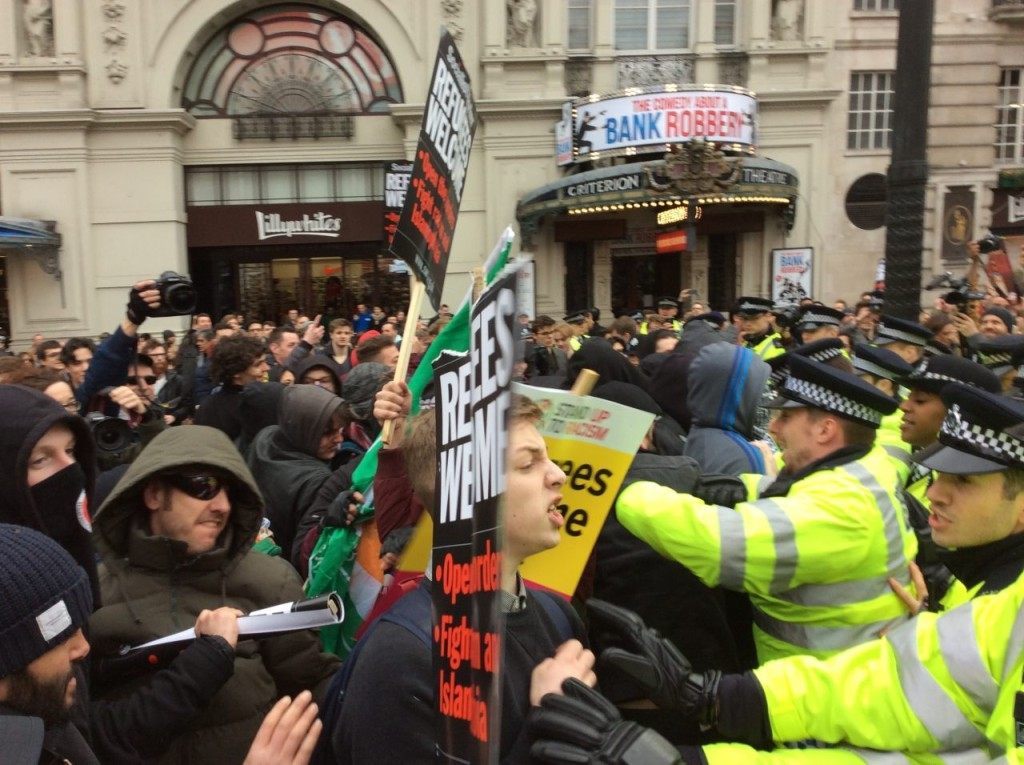 Laying claim to the streets, the somewhat dispersed marchers of the #m19 #refugeeswelcome rally. pic.twitter.com/R6m56aX63k

VIDEO: “David Cameron Shame On You”:

One of the #refugeeswelcome marchers in London explains capitalism. pic.twitter.com/fqnZgTZefh

VIDEO: Demonstrators Chanting “We are black, we are white”: 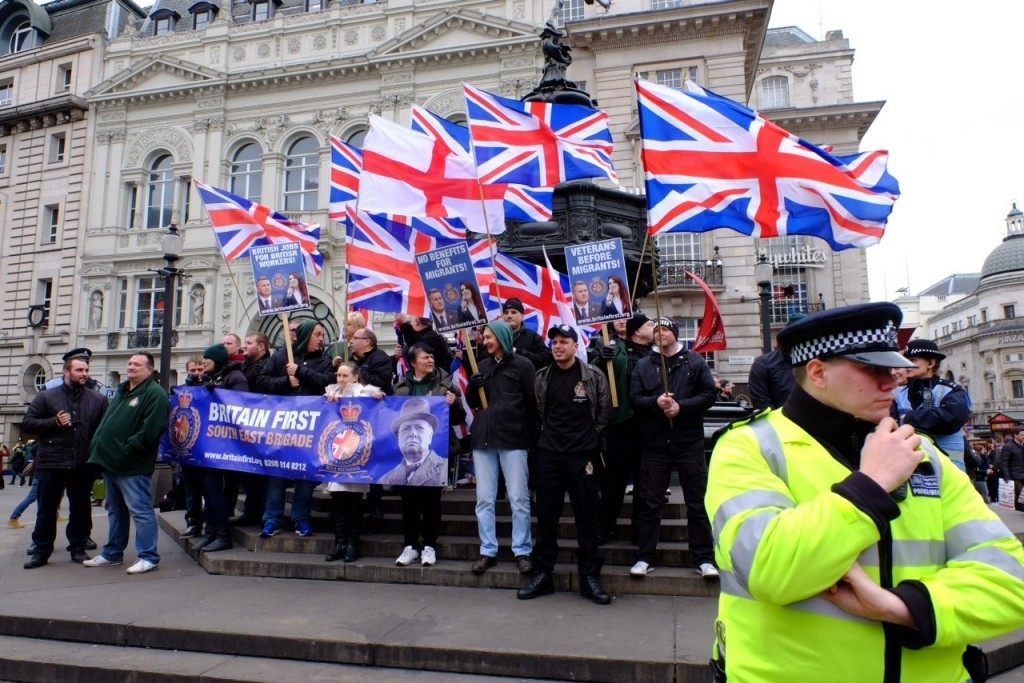