A well-known Muslim shopkeeper has been murdered hours after wishing his “beloved Christian nation” happy Easter on social media. Another Muslim man has been arrested for a “religiously motivated” crime, police confirm.

Asad Shah, from Glasgow, Scotland, was an Ahmadiyyah Muslim, an Islamic sect that is brutally persecuted in the Muslim world and increasingly the West, too.

In Mr. Shah’s native Pakistan, the national constitution has been specifically amended to officially declare Ahmadiyyahs non-Muslims, a charge with grave consequences in the fundamentalist nation.

The shopkeeper, 40, was attacked with a knife and had his head stamped on in a ruthless attack outside his Glasgow newsagents shop just after 9pm last night. He died later in hospital. 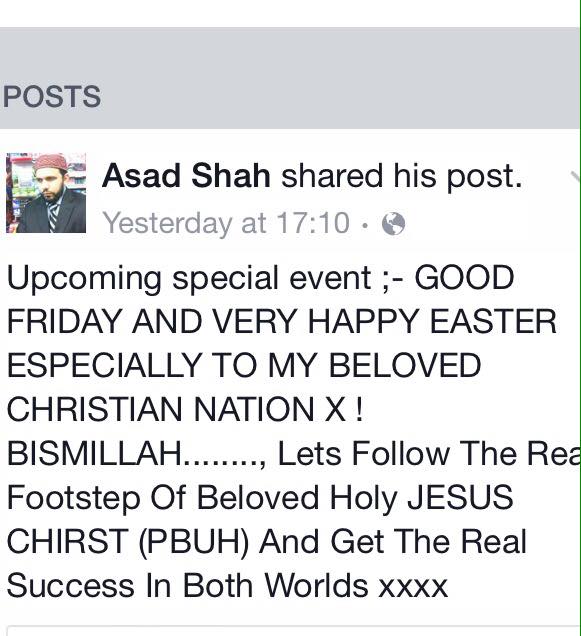 Around three hours prior, he had reach out to neighbours in his host nation to wish them well on the most important day in the Christian calendar and announce a meeting with some practicing Christians.

“Good Friday and a very Happy Easter, especially to my beloved Christian nation,” he wrote on Facebook, adding: “Let’s follow the real footstep of beloved holy Jesus Christ and get the real success in both worlds.”

In previous posts, he spoke with conviction against violence and hatred and called for “unconditional real love for all mankind”.

Police have now confirmed that a 32-year-old Muslim man has been arrested in connection with Mr. Shah’s death, which is being treated as “religiously prejudiced”, the Daily Record reports.

Messages of condolence for the softly-spoken local man who stood out against religious hatred within the Muslim community began poring in last night.

“Asad Shah was my friend on fb for over a year. So patient and kind. A genuine loss. This country loved him as he did us,” Tweeted one Angela Kerrigan.

A Gofundme page was quickly set up, and £22,000 has already been raised for the family of the “popular, well respected and much loved member of our community.”

“Remembering Asad Shah, who was murdered yesterday in Glasgow for the crime of wishing a Happy Easter to his beloved Christian Nation,” added Phil Horaia.

A vigil near his place of work last night was attended by more than a thousands people, including Scotland’s First Minister Nicola Sturgeon.

Moved to be one of hundreds tonight as Shawlands united in grief for Asad Shah and support for his family. https://t.co/W3CmFkW7X8

Yesterday Breitbart London reported how Mr. Rehman had praised the Taliban killer of a moderate Pakistani politician who defended a murdered Christian and spoke out against the countries discriminatory blasphemy laws.

The most senior imam in Scotland described the killer as a “brother” and a “true Muslim”, appearing to support the murder of perceived apostates. He later claimed his comments had been “taken out of context”.

The incident is part of an on-going rift within Scotland’s Muslim community, whereby hard line Sunnis have been accused of taking over the Glasgow Central Mosque and excluding liberals, reformers and women and even funding violent Jihad.

“We’re not living in Pakistan, we’re living in Scotland, and we need to see the values and ideas of the people of Scotland [at the mosque]”, commented Aamer Anwar, a local lawyer who has called for reform at the Mosque on Friday.

“To describe a convicted terrorist as a true Muslim is grotesque,” he added. “There’s real concern within the community that if this is an imam expressing such views, then what is he expressing to our children.”