A new postage stamp celebrating the gay rights movement was unveiled on Swedish breakfast television this morning, prompting one presenter to say she wanted to post one to Putin. 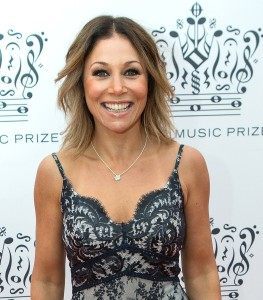 The new stamp is to be released on May the 4th by PostNord, the joint Danish-Swedish postal authority and according to their press release it is a world first. Speaking of the design, the post body insisted it conforms to the rule that “motifs on the stamps must reflect Sweden with historical and contemporary events, individual achievement, anniversary, sports and music stars, cultural events and contemporary phenomena”.

The press release explained that it “feels great” that Swedes are now able to send “physical love greetings with a pride flag” around the world.

Swedish television personality and TV4 News Morning presenter Tilde de Paula was apparently delighted with the design and said she couldn’t wait to buy one of the new stamps.

Speaking to PostNord Communications director Per Ljungberg who introduced the stamp as “Emphasising equal value, the importance of people’s differences and uniqueness”, de Paula said ” I intend to buy the stamp, put it on a small postcard and send it to Putin”.

Mr. Ljungberg joked in return she’d want two stamps if it were to make it to Russia, as it was only normally rated for domestic use, reports Sweden’s Aftonbladet.

Ms. de Paula’s remark was a clear swipe at Vladimir Putin’s strong pro-family policies and warm embrace of the Orthodox church in Russia. His efforts to promote heterosexual couples having children and rejection of some aspects of contemporary Western culture has at times put him and key elements of Russian society at odds with Europe.

Breitbart London reported last year on Russia’s adoption of the so-called straight pride movement which emphasises the importance of “real families” and of having children. Putin ally Aleksey Lisovenko said the release of a straight-pride flag depicting the outline of a traditional family was a response to the “homomania” gripping the west. 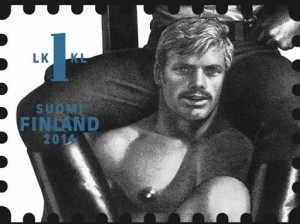 One of the set of Finnish gay stamps

One aspect of common European culture, often associated with the European Union but actually totally separate and predating the political bloc is the Eurovision Song Contest. This trageo-comic celebration of camp culture has also attracted the attention of socially conservative Russians, with the patriarch of the Orthodox church calling it “repulsive”.

Referring to the annual “hotbed of sodomy”, Patriarch Kirill said “All those bearded female singers… [are] repulsive to our soul and our culture”.

While the pride stamp may be the first to depict the flag of political homosexuality, they are certainly not the first gay stamps to enter circulation. Breitbart London reported in 2014 on Finland’s “homoerotic” art stamps commemorating the work of artist Touko Laaksonen. Featuring naked men, the stamps gained attention worldwide.