The “hotbed of sodomy” Eurovision Song Contest final has again been blasted by the Russian Orthodox Church (ROC), after the Primate called the international music event “repulsive”. 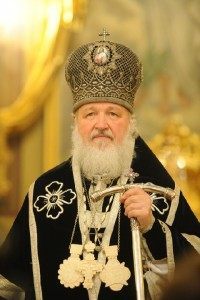 The Leader of the ROC, the Patriarch of Moscow, made the comments last Thursday, echoing the remarks of other traditional religious and political figures, when he made reference to Thomas Neuwirth, the bearded ‘lady’ who won last year’s competition. Speaking of the bearded, cross-dressing performer, who performs under the name Conchita Wurst, Patriarch Kirill said: “All those bearded female singers… [are] repulsive to our soul and our culture”.

Although the 150,000,000 followers of Russian Orthodoxy are likely to take the comments of their Patriarch seriously, some in Russia have met his musings on gay musicians more amusingly, with one highly re-tweeted commentator remarking on the superficial similarities between beard growing, cassock wearing Russian bishops and bears growing, dress wearing Austrian singers:

So strong was Russian revulsion at the outcome of last year’s Eurovision, it was suggested a new competition should be launched to replace the decadence of the present incarnation, named the ‘Voice of Eurasia’. At the time, a spokesman for the Church said: “The last Eurovision contest’s results exhausted our patience.”

“We must leave this competition. We cannot tolerate this endless madness.

“The process of the legalization of that to which the Bible refers to as nothing less than an abomination is already long not news in the contemporary world.

“Unfortunately, the legal and cultural spheres are moving in a parallel direction, to which the results of this competition bear witness”.

A Russian conservative politician said of the competiton last year: “Conchita Wurst’s Eurovision victory symbolizes the complete collapse of the European Union’s moral values… There’s no limit to our outrage. It’s the end of Europe. It has turned wild. They don’t have men and women any more. They have ‘it'”, reports the Christian Post.

The Patriarch may have been cheered by news from the United Kingdom after last year’s Eurovision, that despite the country giving full points to Austria’s gender-bending entry, all was not as it seemed. As Breitbart London reported, in the public vote, Poland’s sexually charged Slavic Girls entry won, but a small panel of BBC judges overruled the text-in vote and gave the points to Austria instead.