The decision on Britain’s future with the European Union (EU) appears to be influenced by issues of sovereignty, democracy, international influence and economics. However, academic research suggests that how people vote in the EU referendum will really be determined by factors such as age, sex, and educational qualifications.

A team of academic experts from the University of Bristol has been modelling likely EU referendum voting patterns based on responses to YouGov polls, census data, and results from the 2014 European Parliament election and last year’s General Election.  Their research, published by the London School of Economics British Politics and Policy blog, applied that data to show clear geographical patterns predicting which side voters will back. 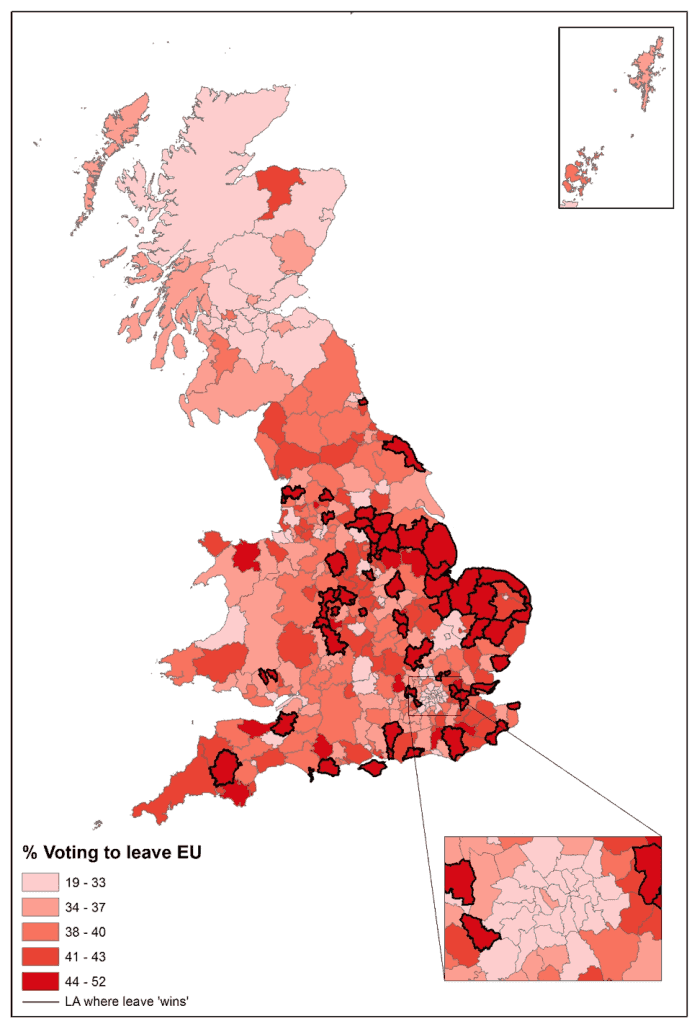 Support for the Leave campaign in the EU referendum — the darker shaded areas of the map above — is derived chiefly from England’s east coast, with the addition of some older industrial areas in Yorkshire and the West Midlands. Some local authorities with large retired populations along the south coast of England also present themselves as pockets of euroscepticism.

Brexit is most popular in South Staffordshire followed by Havering, Gravesham, Boston, Kings Lynn, Mansfield, and Tendring (which includes Clacton).

The areas least in favour of voting to leave the EU tend to have comparatively fewer old people than Brexit supporting ones, and many more graduates and students. They are Lambeth, Hackney, Edinburgh, Haringey, Oxford, Cambridge, Bristol and Brighton.

Most of London’s boroughs and most local authorities in Scotland stand out in contrast to the rest of the UK, with very low support for UKIP in 2014 and for Brexit now.

The authors of the research — which largely backs up a Sky Data survey which Breitbart London previously reported — do concede that it does not necessarily offer rock-solid predictions, concluding:

“Of course, the ultimate test of our models – which we will be developing further – will be on 24 June: have we got the geography right; are our predicted areas of strength and weakness of the Brexit cause correct?

“Much will depend on other factors not yet incorporated in the models – especially turnout rates: will the young, who are much more favourably inclined towards the EU, turn out in the same numbers as the old, who are much more against continued membership?

“Only time will tell.”