Concerns have been raised over recent EU referendum polls that show massive, anomalous leads to the ‘Remain’ camp, calling into question why the Telegraph newspaper is using a lesser known polling company using sample sizes which are less than half that of regular referendum polls.

A recent ORB poll showed the Remain campaign in the lead by 13 points among people who definitely intend to vote. This is at odds with polling from major UK pollsters who use larger sample sizes.

For instance, Opinium has Remain in the lead by just four points, the same as YouGov. Both companies use sample sizes twice as large as ORB.

Another pollster, ICM, had Leave in the lead by four points two weeks ago on a sample size of 2000.

But ORB typically just uses 800 people, and reading deeper into the data, it becomes hard to see how this could be representative of British public opinion.

For instance, ORB seems to have spoken to just 32 people in the North East, just 57 people in social grade D, just six black people (one male), and just six unemployed people in the entire country.

The NTMarkets website claims: “ORB used a telephone methodology – on fixed lines. The bias there is beyond belief, and the method not one I take seriously. The weightings on ORB research I always find odd.”

The author of the article, John Ward, uses the graphic (below) to highlight the anomalous nature of the ORB polling. 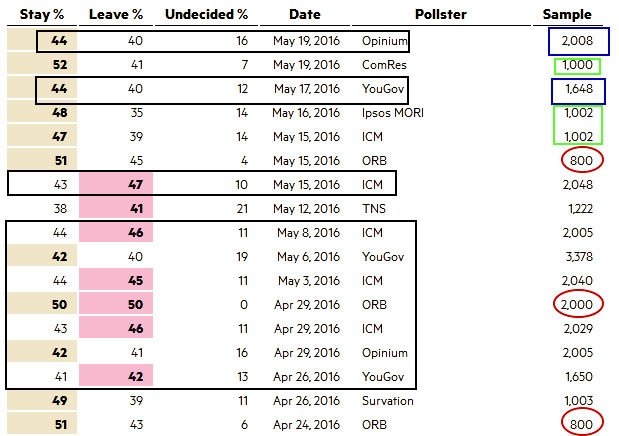 He notes: “Starting with the right-hand column, the red circles around ORB studies, you can see that 2 out of 3 have 800 respondents….as did the third one out today. They all show big leads for Remain. The one where ORB uses 2,000 respondents, however, shows that just three weeks ago, it was a 50:50 dead heat….because in this study, ORB used forced choice questions.”

“The green rectangles highlight the other smaller samples…. all of which show a bigger Remain lead.

But look at the blue rectangles – where we have samples 50% or more larger in size – and they too  show much closer results – a 4% margin, with 16% still undecided.”

“The reality is that, from the off, ORB’s small sample surveys using phone methods have been the rogue elephants in the room.”

And the findings of NTMarkets seems to be consistent with the views leading academics, with one telling Breitbart London: “[NTMarkets] has a valid point. Remain has increased by around 1 point across all polls”.

Prof. John Curtice, the president of the British Polling Council even commented today about the poor reliability of phone polls.

In a paper entitled: “The Divergence Between Phone and Internet Polls” he probed the sample sizes and weighting, concluding: “It has been suggested that phone samples contain more socially liberal graduates than do internet polls, and given that graduates are more likely to favour remaining in the EU, this helps account for the divergence. However, we have seen that the evidence on this point is far from consistent – but equally importantly is also relatively limited. Given the extent to which educational background is associated with voting intention in this referendum, the fact that information on that background is not regularly being collected and used by the polls is arguably an important lacuna in the methodology that is being employed, irrespective of whether the polls are being conducted over the phone or via the internet.”

Prof. Curtice also highlights the importance of graduates being over-represented in phone polling. ORB’s breakdown doesn’t give a suggestion as to how many graduates vs. non-graduates they spoke to, and the section on occupations was inexplicably redacted from their data.

One polling industry insider told Breitbart London that ORB uses “random digit dialing” which effectively dials random numbers until it makes a connection with a human being who might answer questions. The methodology is used by Pew’s Research Center, but in tiny sample sizes can lead to a less representative sample that relies more on post-poll weighting.

The Telegraph – owned by the Conservative Party donors Sir David and Sir Fredrick Barclay – has used ORB polls sporadically in the past, but have adopted ORB as the pollsters of choice for the EU referendum as of April 2016.

Breitbart London contacted ORB and the Telegraph for comment but has received no reply at the time of publication.

The Federalist website has previously reported on how polling can be used to convince voters rather than accurately reflect their opinions.

In the section entitled “push polling”, author Mandi Ancalle writes: “These days, polls seem to endeavor to impact voters rather than reflect voters’ intentions, touting an “everybody else is doing it” mindset.”

The Conservative Party was accused of using such tactics against the UK Independence Party (UKIP) in the Rochester by-election of 2015. At the time, the polling company was traced back to a company called Messina Quantitative Research (MQR), owned by Barack Obama’s leading election strategist Jim Messina.

Mr. Messina worked on the Conservative Party election campaign in 2015 alongside David Cameron’s recently knighted election strategist Lynton Crosby, whose commentary on Brexit has accompanied the ORB International polling in the Telegraph for weeks on end.