The number one trending story on Facebook on the day Britain votes on its membership of the EU is radical hate preacher Anjem Choudary lending his support to Remain.

At the time of writing, the story sits above the controversy concerning people voting with pens, the president of the European Commission insisting there will be no reform after the Brexit vote, and actress Sheila Hancock backing Remain.

Breitbart London broke the story on Tuesday, with Mr. Choudary telling us that he backed Remain because “there are certain principles and caveats” in EU law that offer “recourse” to Islamist radicals.

“I think that [leaving the EU] is something that is probably not in our advantage from a Muslim perspective,” he added.

Even Stronger In, the official campaign to keep Britain inside the EU, tweeted the story out proudly this morning, before swiftly deleting the post.

The story was picked up by the Sun, the Daily Express, the Telegraph and others, and shone a light on the EU institution’s questionable history of protecting the “rights” of terrorists and hate preachers and blocking their deportation. 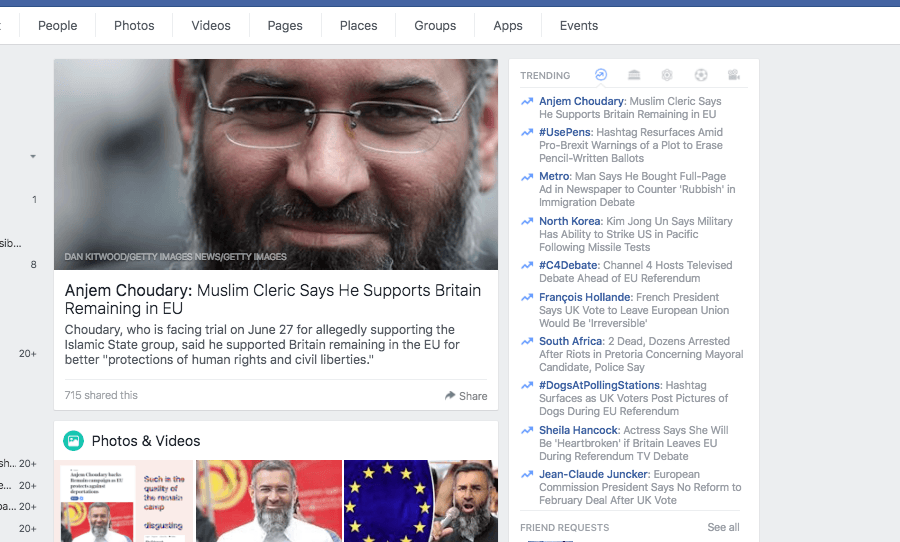 A prominent example is Abu Hamza, the Egyptian extremist who preached militant Islamism in London. EU courts blocked his deportation for eight years, even after he had been found guilty of numerous terror-related crimes.

Mr. Hamza’s presence was undoubtedly a danger to the UK. He passed his message of hate onto three of the 7/7 bombers, who went on to murder 52 people and kill themselves in the London terror attacks in 2005.

Mr. Choudary himself is currently facing charges of supporting Islamic State. In the past he has praised 9/11 terrorists as “magnificent martyrs”, said he wants to see “sharia dominate the world” and the “flag of sharia” fly over Parliament.

He strongly denied supporting Islamic State terrorists when talking to Breitbart. His close associate, Abu Rumaysah, recently travelled to Syria and is thought to be the “new Jihadi John” Islamic State executioner.