The most important job of any good wife is to stop her husband making a complete dick of himself.

She has to, if only out of self-preservation, because if she didn’t the house would get repossessed, the kids would be accidentally forgotten in the playground, and the family income would dwindle to nothing because of the stupid joke hubbie shouldn’t have made to the boss’s wife at the office party.

I know because I’m one of those utterly crap husbands. Most of us are, I suspect: it goes with the territory of being male.

But in our enthusiasm and optimism, we’re often really crap on detail like the need to read the boring small print and dot the i’s and cross the t’s on contracts because it rarely occurs to us in our air-headed, distracted, blokey way that something bad might happen. That’s where the wife comes in. Being female, she is not only more sensible but possibly more in tune with the ways of evil. Women spend their whole lives trying to scheme and destroy one another so they’re alive to this sort of thing in the way men are not.

This is the context in which we need to see this so called “Lady Macbeth” story, in which Michael Gove’s wife Sarah Vine has been caught out advising her husband not to trust his running mate Boris Johnson.

Here is what her accidentally leaked email to him said: 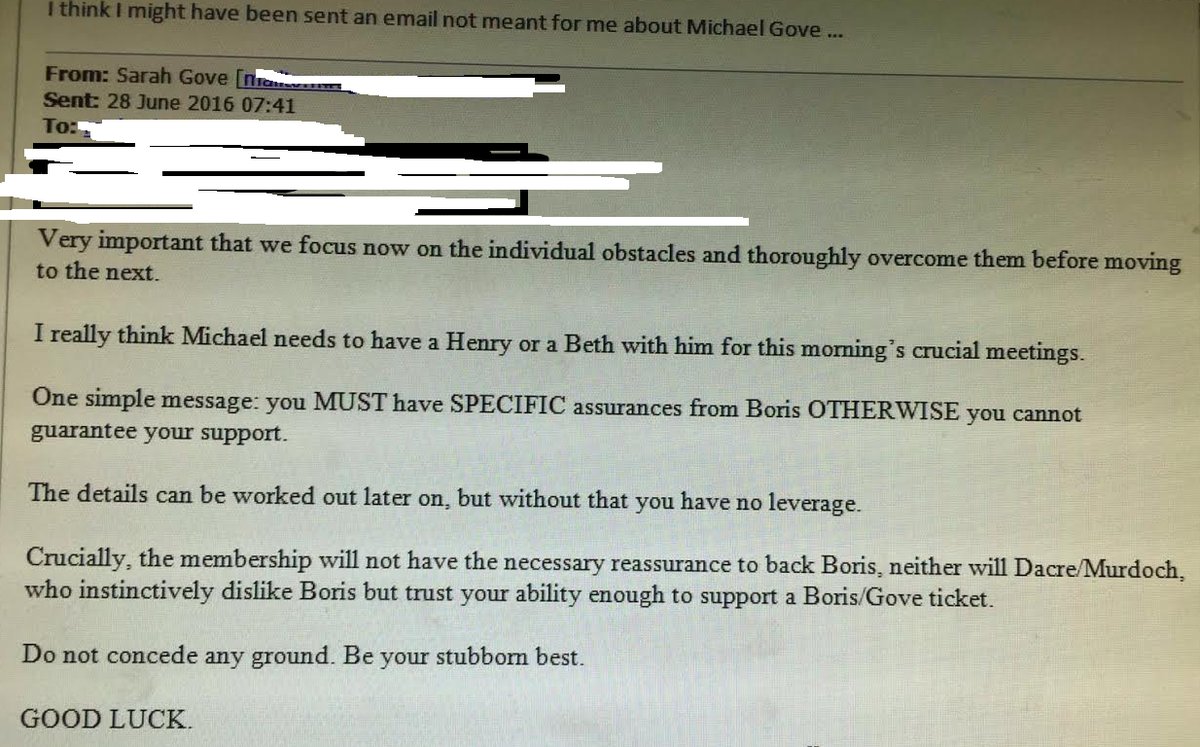 This all seems eminently sensible advice, especially when – as I do – you know most of the parties involved.

Boris Johnson, for all his many qualities, is a flake who flies by the seat of his pants. He also has the fatal flaw of wanting to be liked. So it’s no wonder that neither News Corp chief Rupert Murdoch or Daily Mail editor Paul Dacre – the two key media forces which backed Brexit – are entirely comfortable putting their weight behind Boris, unless it can be guaranteed his wilder enthusiasms are checked by wiser counsels. That’s why it’s so important he has Gove as his running mate. Without Gove he’s not nearly so serious a proposition.

Michael Gove has many strengths too – charm, wit, eloquence and a keen intelligence. But like many who enjoy the life of the mind he is not so much a man of the world. You could trust him to solve the Middle East crisis; less so to remember to tie up his shoelaces – or negotiate a business contract where he didn’t personally get shafted. That’s what his wife Sarah is for.

Sarah Vine is not only a superb columnist and one of the best editors I’ve ever had the joy of working for but also the power behind the Gove throne. I don’t think this makes her Lady Macbeth, as people are gleefully saying because they resent her husband’s extraordinary success in the EU referendum and will do anything to undermine it. Just a good wife doing what so many of the best wives – mine, for example – do: making damn sure that people don’t take advantage of her husband’s trusting nature; stopping him making a complete pillock of himself.

Is any of this shocking or damning? I really don’t think so. What we’re seeing here is a first rate marital partnership in action. Vine loves Gove and is trying to do her best for him. Boris remains, for better and for worse, exactly the same Boris he was before this story broke. Boris needs Gove just as Gove needs Vine.

That’s what teams are for: to balance each other’s strengths and weaknesses. It’s why I’m still backing Boris and Gove.