A ‘grime’ rapper from Bradford has ostensibly threatened the gang rape of one of UK Independence Party leader Nigel Farage’s young daughters, Breitbart London can reveal.

Lunar C – real name Jake Brook – tweeted ahead of Britain’s European Union referendum that he and “his pals” would “run a train” on Mr. Farage’s daughter. He did not specify which daughter, but Mr. Farage’s young girls are aged 9 and 15 respectively.

The comment went largely unnoticed at the time, apart from a few supportive retweets from Mr. Brook’s followers. Mr. Brook has, this afternoon, reached out to Breitbart London to apologise. He has also deleted the tweet.

Mr. Brook’s original tweet, below, came less than four hours after Labour MP Jo Cox was stabbed and shot on a street in Birstill, just 6 miles from Bradford.

The message read: “Here’s a pic of me n my pals on our way to run a train on @Nigel_Farage’s daughter”. He attached a picture of a horde of migrants, as used in UKIP’s famous “Breaking Point” poster. Mr. Brook’s claim that these migrants are rapists may also upset left-wing, open borders campaigners, as it coincides with Sweden’s launch of anti-rape wristbands to deter “rapefugees”. 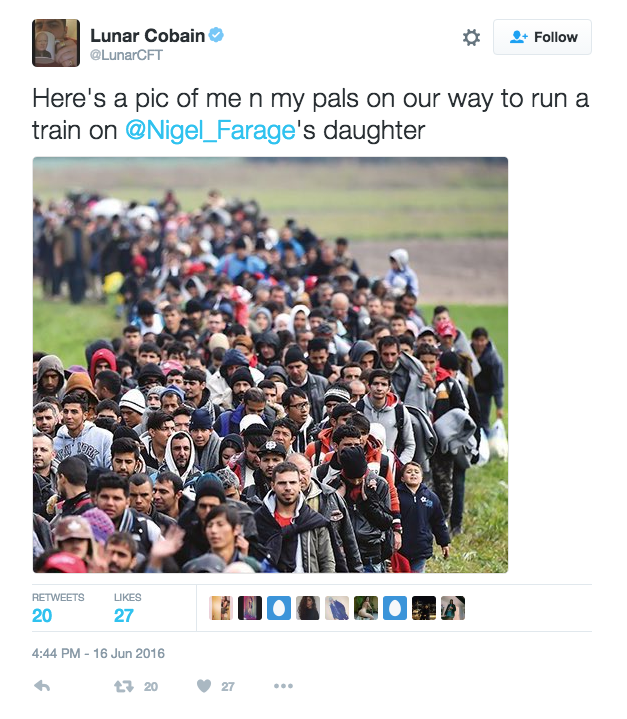 And his comments are somewhat derivative. Mr. Brook appears to be mimicking rapper Azalea Banks, who was forced to apologise after tweeting threateningly about U.S. politician Sarah Palin.

In April Ms. Banks said: “Lets find the biggest burliest blackest negroes and let them run a train on her”.

A “train” is slang for a group sex act where a large number of men line up to have sex with the same woman. The act would be gang rape without repeated, individual consent of the woman.

Ten days ago Breitbart London reported on the spate of threats aimed at the UKIP leader. Instead of reporting on this, the mainstream media focused on a small rise in reported hate crimes, some of which have turned out to be people phoning the police to claim Nigel Farage offends them.

Some news outlets have begun reporting in the past 48 hours on threats to Mr. Farage and his family.

At the time of going to publication, Breitbart London received the following message from Mr. Brook:

“Hello I just wanted to message you to say I understand your anger at the tweet if that’s the way you took it but in no way was it a threat and nothing I said implied ‘rape’ I had no idea he had a daughter never mind young daughters which is why I deleted the tweet I realise you are using this as a way to get at people who are angry at the referendum but don’t try to twist my words please I immediately apologised and deleted the tweet please show me the same respect”.