The thirty second video contrasts suggestions made by anti-Brexit campaigners during the referendum on Britain’s membership of the European Union that Britain is “too small” and needs “to be in the EU”, with photos of successful British Olympians.

Among those featured are Andy Murray who took gold in the tennis, and Mo Farah, who won gold in the 10,000 metres running race, before the picture cuts to the Olympics medals table showing Britain in second place. The video concludes with the Team GB lion and Olympics rings logos, followed by the Leave.eu logo. 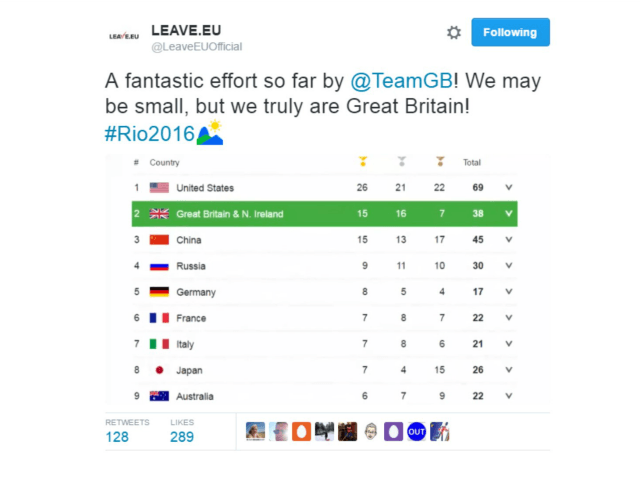 The accompanying text reads: “A fantastic effort so far by @TeamGB! We may be small, but we truly are Great Britain! #Rio2016”

The tweet has caused controversy on twitter, where some have asked what the Olympics results have to do with Brexit, while others have argued that the athletes’ success is “proof [that] Little Britain [is] more than capable of punching above its weight”.

But the British Olympics Association (BOA) has now weighed in, objecting to the tweet and others like it posted on social media by Leave.eu on the grounds that they have illegally used intellectual property belonging to Team GB.

In a letter from the BOA’s lawyers to Leave.eu, they insist “we, the British Olympic Association (“BOA”) own, protect and enforce all Olympic-related intellectual property in the UK including (among other things) the word “Olympic”, “Olympian”, “Team GB”, “Rio 2016”, the Olympic Rings logo, the Team GB logo and all Team GB athlete imagery.”

Warning that a number of social media posts by Leave.eu, including the video included in the tweet, “extensively utilise the above marks,” they have requested that Leave.eu not only remove the posts listed, but also make them aware of any other posts which they may have missed and advise them of the total number of shares and likes on all of the posts immediately.

The letter continues: “Please note that usage of any Olympic-related intellectual property (including the words “Rio 2016”, “Team GB”, “Olympics” and “Olympian” and any Olympic/Team GB logos) or which do not contain these marks but suggest an association with the Olympic Games or movement (e.g. by containing images of Team GB athletes, congratulatory/good luck messaging to athletes or retweeting Olympic related content), without our consent constitute an infringement of our intellectual property rights.

“These rights are reserved exclusively for our official partners who, as you will appreciate, pay significant sums to use our IP and associate themselves with the Olympic Games.”

The BOA appears to have been made aware of the tweeted video via Olympic cyclist Callum Skinner, who features in the video as a silver medallist in both the men’s sprint and team sprint events. Mr Skinner replied to the tweet from his own account, saying: “thanks the the [sic] support but I wish you wouldn’t use my image to promote your campaign.”. He ended his tweet with emoticons of the EU and British flags.

However, Leave.eu insist that they will continue to celebrate British successes in the wake of the referendum result, which saw a slim majority of Brits opt to leave the EU.

In a statement, Leave.eu said: “Throughout the referendum campaign, remaniacs constantly talked Britain down, believing we were too small and too pathetic to succeed outside of the EU. We understand they’re still pissed that the majority of people do believe in Britain and want us to succeed as an independent country outside of the crumbling EU, but to try and stop us promoting just how great we’re doing reeks of desperation.

“They even want us to stop supporting our very own Andy Wigmore who moonlights as an Olympic shooter for Team Belize when he’s not running our communications. Anybody who has followed Wigmore’s Olympic saga will know he needs all the support he can get!

“Leave.EU will continue to publish stories that showcase how Britain is thriving as we Leave the European Union.”