(AFP) – A Malian jihadist on Monday asked the people of Mali for “forgiveness” after he pleaded guilty to ordering the 2012 attacks on the fabled site of Timbuktu.

“I seek their forgiveness and I ask them to look at me as a son who lost his way,” Ahmad al-Faqi al-Mahdi told the International Criminal Court, as his unprecedented trial got under way in The Hague, adding he was “really sorry” and regretted “the damage my actions have caused.”

Mahdi, aged about 40, is the first person to plead guilty at the world’s only permanent war crimes court. 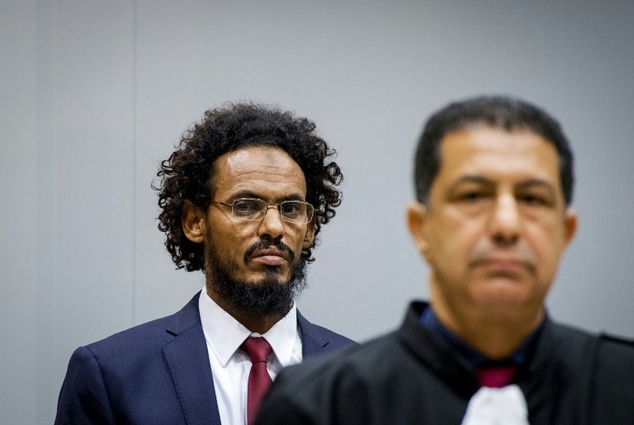 “Your honour, regrettably I have to say that what I heard so far is accurate and reflects the events. I plead guilty,” he told the court after the solo war crimes charge of cultural destruction was read to him.

Mahdi is also the first Islamic extremist charged by the ICC and the first person to face a solo allegation of cultural destruction.

The attacks on the ancient shrines by jihadists in 2012 triggered global outcry, and archaeologists hope the trial will send a stern warning that such plundering of our common heritage will not go unpunished.

Plucked from the edges of the Sahara to a courtroom in The Hague, the bespectacled Mahdi is accused of “intentionally directing attacks” against nine of Timbuktu’s famous mausoleums as well as the Sidi Yahia mosque between June 30 and July 11, 2012.

Founded between the fifth and the 12th centuries by Tuareg tribes, Timbuktu’s very name evokes centuries of history and has been dubbed “the city of 333 saints” for the number of Muslim sages buried there.

Revered as a centre of Islamic learning during its golden age in the 15th and 16th centuries and a designated UNESCO world heritage site, Timbuktu was however condemned as idolatrous by the jihadists.

ICC prosecutors allege that Mahdi was a member of Ansar Dine, a mainly Tuareg movement that in 2012 took control of Timbuktu some 1,000 kilometres (600 miles) northeast of Bamako, along with Al-Qaeda in the Islamic Maghreb (AQIM).

As the head of the “Hisbah” or the “Manners Brigade” he ordered the attacks on the shrines, ICC prosecutors say.

Such cultural destruction “is tantamount to an assault on people’s history. It robs future generations of their landmarks and their heritage,” ICC chief prosecutor Fatou Bensouda told AFP before the trial.

“No one who destroys that which embodies the very soul and the roots of a people through such crimes should be allowed to escape justice.”

The prosecution was due to lay out its case for sentencing, calling three witnesses. The defence and the legal team for the victims will also address the three-judge bench during the five days set aside for the trial. A verdict and judgement will follow later.

Mahdi is also the first person to be charged with war crimes arising out of the conflict in Mali.

Handed over to the ICC by Niger in late 2015, Mahdi is “a Muslim who believes in justice,” defence lawyer Mohamed Aouini told an earlier hearing.

“He wants to be truthful to himself and he wants to admit the acts that he has committed,” Aouini said, adding he also sought “pardon” for his acts. 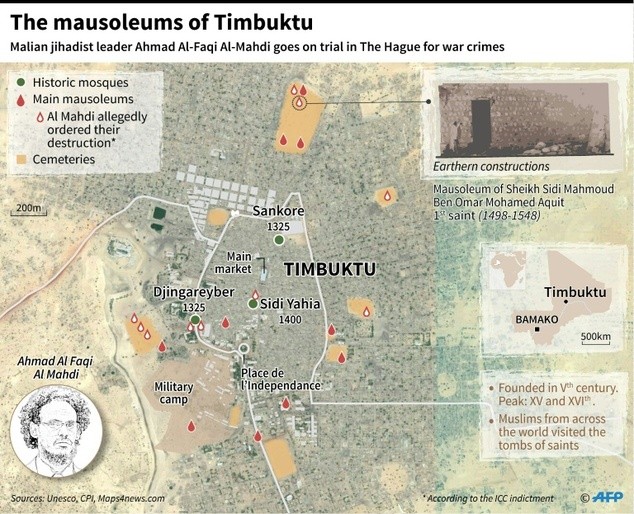 Mahdi has been described as a quiet Koranic scholar who turned ruthless jihadist enforcer, fiercely imposing the strictest interpretation of Sharia law.

Frustrated when local people refused to stop worshipping at the ancient shrines, with such rites as praying for rain, or a good marriage, Mahdi ordered the attacks with pickaxes, chisels and pick-up trucks.

UNESCO chief Irina Bokova said recently the case was close to her heart and that she “would never forget” the scenes of ransacked and damaged shrines she saw on a visit to Timbuktu in January 2013 shortly after the jihadists had been driven out by a French-led operation.