The President of the European Council has slammed “detached” European elites and said the “chaos” of last year’s migrant crisis contributed to the Brexit vote, as he announced a meeting on keeping the bloc together.

“We must help people to restore faith in the fact that the EU should serve them, guarantee their protection and share their emotions,” said Donald Tusk, the former president of Poland.

“All too often today, the European elites seem to be detached from reality,” he added.

Speaking to Reuters in Luxembourg, he explained that he will be chairing a meeting of EU leaders in Bratislava on September 16, with the political consequences of the Brexit vote top of their agenda.

Repeating the position EU Commission President Jean-Claude Juncker, who has insisted the terms of the UK’s exit will not be discussed until Article 50 is triggered, said:

“We need to discuss what Brexit means politically for the European Union… It is not our intention to talk about the UK in Bratislava or our negotiation strategy vis-à-vis the UK. Our position is crystal clear: there will be no negotiations without notification.” 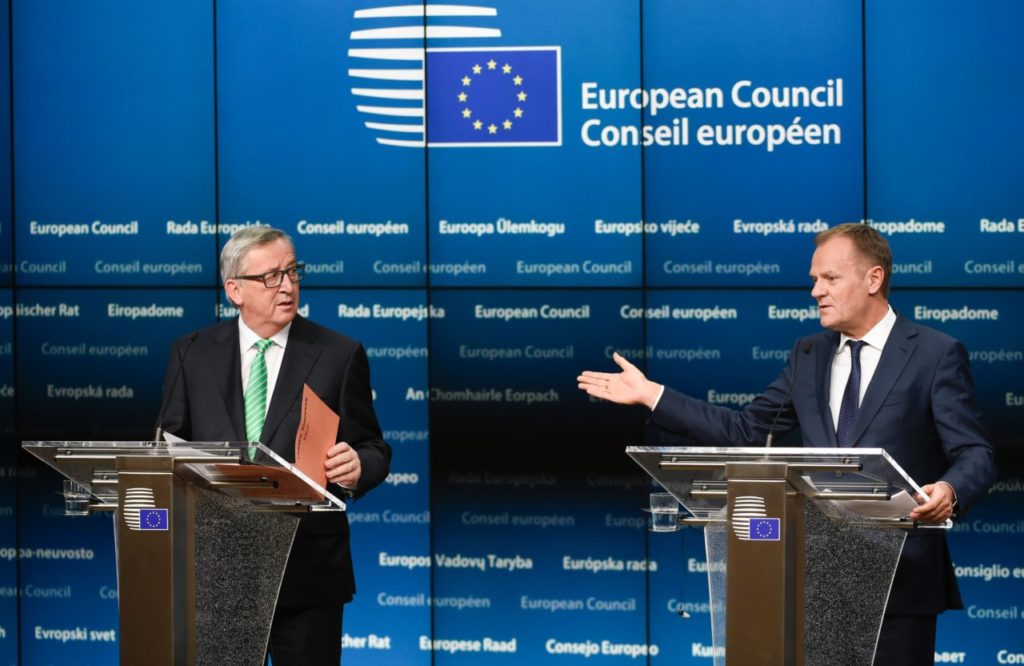 European Commission President Jean-Claude Juncker (L) and President of Council Donald Tusk give a joint press conference after a marathon summit on whether Britain will stay in the EU, in Brussels On February 20, 2016. (JOHN THYS/AFP/Getty)

“There will be no secret negotiations. I have placed a presidential ban on committees engaging in discussions with representatives from the UK,” the unelected head of the EU’s executive arm said at the end of June.

British Prime Minister Theresa May has repeatedly said she would not send such a formal notification until next year.

Justifying the “presidential ban” and hard stance on negotiations, Mr. Tusk said: “It is there for a reason: to protect the interests of the members of the Union that want to stay together, not the one which decides to leave.”

Mrs. May has insisted that restoring border controls will be a “red line” for the UK, but EU leaders such as Germany’s Angela Merkel have insisted that open borders will remain a strict condition for access to the single market.

“Our aim must be clear: Never again should we allow the chaos of 2015 to repeat in Europe,” Mr. Tusk said, saying it was no accident that immigration was at the forefront of the “leave” campaign in Britain.

(Reuters contributed to this report)