(REUTERS) – On a recent evening on Hungary’s border with Serbia, a fleet of police trucks raced along the dusty boundary.

A heat sensor trained on the razor wire fence had picked up migrants approaching, officers explained. The migrants, about two dozen in number, quickly split up and went back deep into Serbian territory, police said.

It was a scene that has played out many times in the months since Europe’s migrant crisis erupted.

“The human traffickers are never idle. Their night-vision drones watch our patrol system. They take advantage as soon as we redeploy our forces,” said police commander Zsolt Gulyas.

Hungary’s border with Serbia is relatively calm these days, in contrast to scenes last September when hundreds of thousands of migrants crossed Hungary on the way to western Europe. That was before Hungary erected a razor wire fence.

“We have created a system that works,” said Gulyas, referring to the fence and the thousands of police and soldiers who guard the border day and night.

Hungary allows 30 people per day into two transit zones where they can submit an asylum request. Anyone who breaches the border is escorted back through gates in the fence if caught within 8 km. 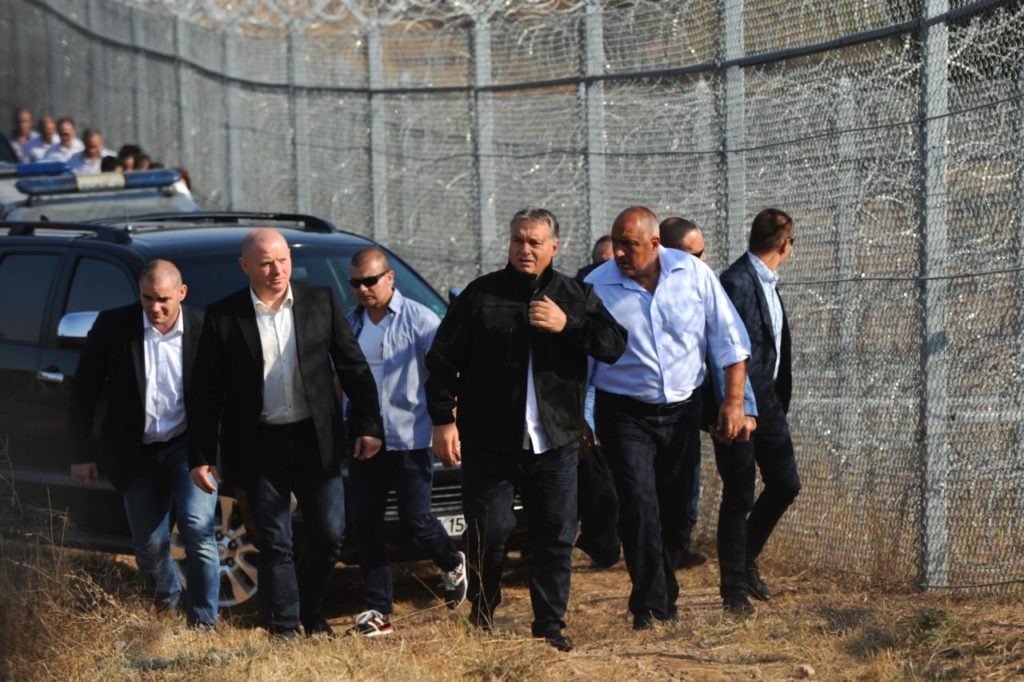 Hungary’s Prime Minister Viktor Orban (C) and Bulgaria’s Prime Minister Boyko Borisov (R) tour the area where a fence was erected on the Bulgaria-Turkey border near the town of Lesovo, on September 14, 2016. (NIKOLAY DOYCHINOV/AFP/Getty Images)

Rights group Helsinki Committee says the system is unsustainable. “The new Iron Curtain is a slap in the face for human rights and Hungary’s European values,” said co-chair Marta Pardavi.

With only weeks left until an Oct. 2 referendum on whether Hungary should reject EU migrant quotas, Prime Minister Viktor Orban, who opposes immigration into the EU, has largely managed to seal the Serbia-Hungary border to migrants.

This in turn has cemented support for his Fidesz party. A poll by government-friendly think tank Szazadveg earlier this year said 79 percent of Hungarians supported the border fence. The government has started fortifying the fence with a second barrier.

“We lose our European values and identity the way frogs are cooked in slowly heating water. Quite simply, slowly there will be more and more Muslims and we will no longer recognise Europe,” Orban told parliament on Monday.

Opposition politicians and some analysts say that by keeping the issue of migration front and centre, Orban is trying to divert attention from problems elsewhere – education, healthcare and corruption.

“Fidesz’ support goes up when the debate is about migration, it goes down when it’s about other issues. It is vital for Fidesz to keep the migration issue on the agenda,” said Csaba Toth, director of the think tank Republikon Institute. 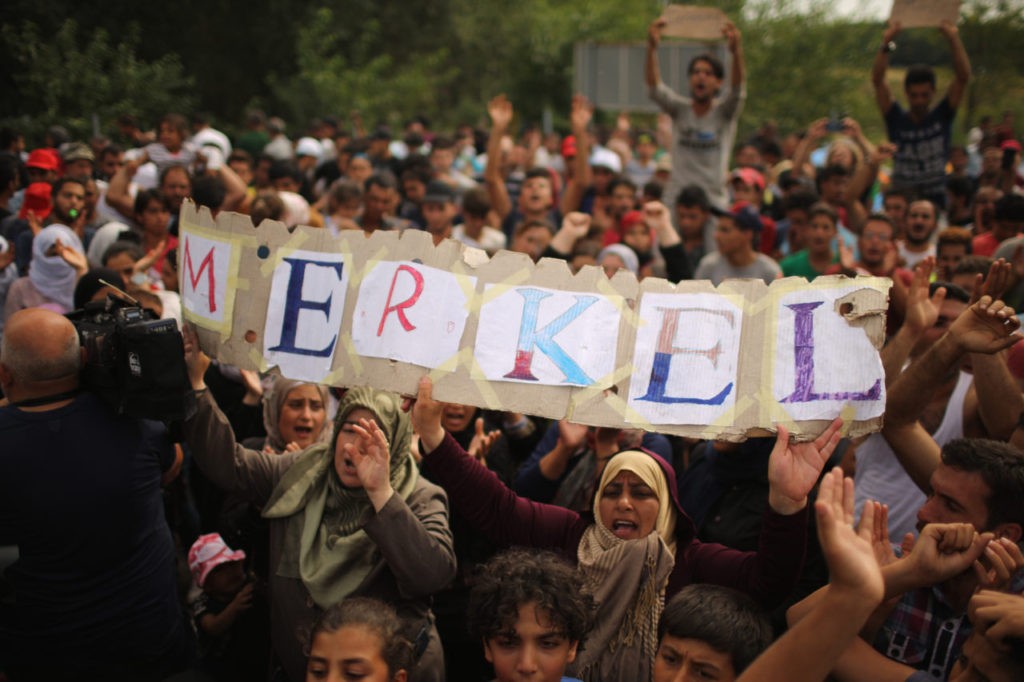 Migrants remonstrate with Hungarian police before they were hit with pepper spray, water cannons and tear gas at the Horgos border post on September 16, 2015 in Horgos, Serbia. (Christopher Furlong/Getty Images)

The main challenger to Orban’s Fidesz is the nationalist, anti-immigrant Jobbik party. It is far behind Fidesz in the polls – a recent survey put Jobbik’s support at 10 percent, versus 28 percent for Fidesz – but Jobbik could benefit from any perceived softening of the government’s stance on migrants.

Like Fidesz, Jobbik has asked Hungarians to reject EU quotas. But its leader Gabor Vona has said Orban should resign if participation falls below the minimum required to make the vote valid. By law, the turnout must exceed 50 percent.

At the border, the political antagonism between Jobbik and Orban’s Fidesz takes a more muted form.

The mayor of Asotthalom, a village on the Serbian border, is Jobbik vice chairman Laszlo Toroczkai. He said that when the government announced it would build the fence last year it was the “happiest day of my life”.

For more than a year Asotthalom was on the route travelled by tens of thousands of migrants on their way to Germany.

“By September 2014 migration had became so massive that I realised nothing but a serious military force and a physical fence could stop this invasion,” said Toroczkai.

Standing beneath the razor wire coils, which he says he championed, he told Reuters he was no longer worried for his family, who live on a farm close to the border. 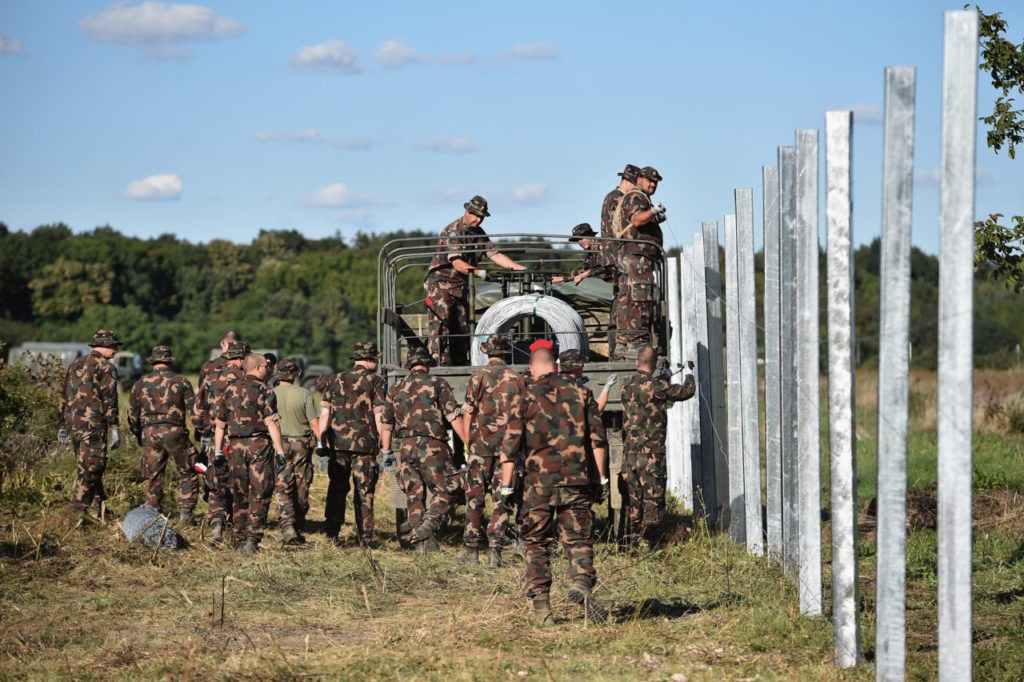 Hungarian soldiers erect a fence at a border point between Croatia and Hungary where migrants are being transported by bus through to Austria on September 21, 2105 in Baranjsko Petrovo Selo,Croatia. (Jeff J Mitchell/Getty Images)

Leftist and liberal parties have been wrong-footed by the migrant debate. The Socialists have urged Hungarians to boycott the referendum, which they say serves Fidesz’ interests – but Socialist chairman Gyula Molnar said he would support Orban against quotas imposed by the EU.

The latest polls show participation may or may not break the 50-percent mark required by law, but the result seems to be beyond doubt.

“We know that even if it is not a valid referendum legally, meaning only 30 or 40 percent show up, those who do will support the government,” said think tank director Toth.