Activists in the ‘Jungle’ migrant camp in Calais have been accused of “sex tourism” and sexually exploiting migrants, including children, with many attempting to justify the relationships as “normal”.

The allegations are not new within the large networks of left-wing activists and volunteers who regularly travel to the camp, with stories of people “well known” for “sleeping around” with migrants.

However, the story was exposed to the press and the public after an extensive discussion on Facebook.

The topic appears to have first surfaced in the ‘Calais – People to People Solidarity – Action from UK’ group, before spilling over into the ‘Calais Migrant Solidarity (No Borders)’ page. 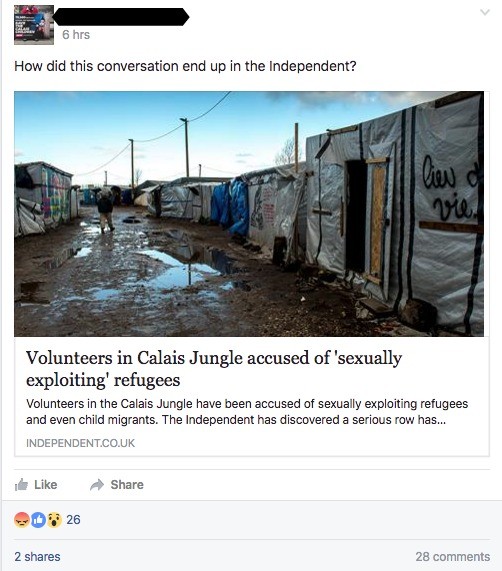 Some of the activists argued that having sexual relationships with adult migrants is natural and acceptable, yet many others said they could be coercive and were “exploitation”, breaching codes of conduct.

The original thread has now been deleted, but screenshots obtained by the Independent reveal it began with a post from a male volunteer who wrote:

“I have heard of boys, believed to be under the age of consent, having sex with volunteers. I have heard stories of men using the prostitutes in the Jungle too.

“I have heard of volunteers having sex with multiple partners in one day, only to carry on in the same vein the following day. And I know also, that I’m only hearing a small part of a wider scale of abuse.”

Many accused the man of being provocative and creating a “backlash”. Others lashed out at the “right-wing media” for reporting on the claims, but some said it was good the “sex tourism” was now “out in the open”.

The United Nations Refugee Agency (UNHCR) was quick to condemn the activists involved, calling for charities in Calais to impose “zero tolerance” policies on any exploitation.

However, the Calais ‘Jungle’ is not an official refugee camp and anyone can enter. It has become a fashionable destination for young left-wingers to visit and take photographs and party, and there is no way of policing who can enter.

Both men and women were accused of entering into sexual relationships with migrants in the Facebook discussion, and it quickly descended into an argument about feminism.

Some continue to excuse the relationships

“Female volunteers having sex enforces the view (that many have) that volunteers are here for sex. This impression objectifies women in the camp and increases the risks”, added the man who started the thread.

Female members of the group then accused him of sexism and misogyny. One commented: “I find this attitude incredibly patronising and paternalistic with added sexism and racism.

“There is a serious point in here among all the moralistic bullshit but I find it very off-putting. I find the assertion that women choosing to have sex encourages rape quite frankly disturbing.”

Clare Mosely, founder of Care4Calais, told the Independent how one male volunteer was recently reported for inappropriate behaviour with female refugees, but the charity leaders had no power to expel him from the camp.

She said: “He initially worked with another charity called Auberge des Migrants. But when he was reported for inappropriate behaviour with female refugees they told him to leave.”

Others called for increased secrecy after the story broke

Maya Konforti, who volunteers for Auberge des Migrants, told the website about another case in which a British female volunteer had built up a “bad reputation” in the camp by sleeping with multiple migrants, before settling down with one.

Ms Konforti said: “I know one British woman who had a very bad reputation in the Jungle. If she had been volunteering with Auberge she would be thrown out, but she did it on her own, she was here independently.

“She found the right refugee and now she’s with him. That’s what I hear. She’s back in the UK and lives with a refugee.”