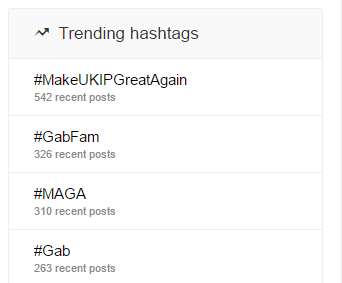 Taking what is known as ‘right wing Twitter’ — new social media platform Gab.ai — by storm, #MakeUKIPGreatAgain was trending in first place on the site by Wednesday evening. The rallying cry to end the infighting at the top of UKIP posted above even Donald Trump’s campaign slogan Make America Great Again, a perennial favourite on the site.

Posting on the Gab platform, Mr. Kassam courted support of the predominantly right-wing members of the site, and celebrated the hashtag reaching number one in typically ebullient style.

Mr. Kassam also kicked off fundraising for his campaign, noting would-be contenders had to stump up a £5,000 deposit to seek election — a figure that would not be returned unless a vote threshold is reached.

Those contributing to the hashtag sent messages of encouragement from around the world called on Raheem to address a host of problems as leader, from fixing BBC bias to pressing for Brexit.

The popularity of Mr. Kassam’s nascent campaign on the increasingly popular Gab platform may be linked to the founding principles and constituency of the new social media site. Speaking to Breitbart, founder Andrew Torba said the site was created in response to censorship on what he called “Big Social” sites like Twitter and Facebook.

He said: “If I had to pick a single event that pushed me over the edge to take action, I would have to say it was the suppression of conservative sources and stories by the incredibly biased Facebook Trending Topics team.

“Many of us don’t realize just how much power and influence the News Feed and Trending Topics products have on our psychological understanding of the world around us. There are hundreds of millions of people who get their main source of news and information from a handful of companies in one of the most progressively liberal cities in the world, it’s time for a change… At Gab we welcome anyone who wants to speak freely”.

The declarations of both Mr. Kassam and Northern MEP Steven Woolfe to stand for leader followed a tumulus 24 hours for UKIP, after the surprise resignation of newly elected Diane James and the return of Nigel Farage as interim leader.