A new study by the Pew Research Center points to Europe’s migrant crisis as a key to the rise of populist movements in a number of countries across the European Union (EU).

In its report titled “Populism and Global Engagement: Europe, North America and Emerging Economies,” the Pew Center found that Europeans are frightened about the threat posed to national security and the safety of citizens by the waves of mostly Muslim migrants entering their territories.

Analyzing “the growing support for populist movements that has been a prominent feature of recent politics” in Europe, Pew revealed that the popularity of these movements is linked to “skepticism or hostility toward trade, immigration and European integration.”

In the area of national security, a clear majority of Europeans (59 percent) believe that “refugees will increase the likelihood of terrorism in our country,” the study found. 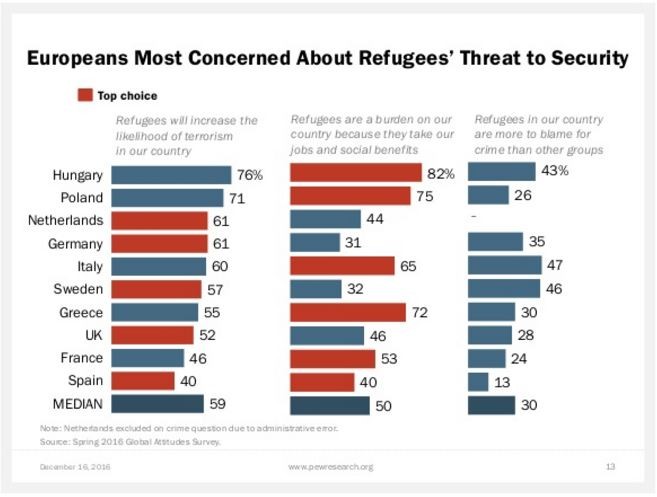 Among European nations, citizens of Hungary expressed the most widespread fears of an increased terror threat from immigrants (76 percent), while the lowest level of concern was voiced by Spain, at 40 percent of the population.

Hungarians also expressed the highest level of fear regarding the loss of jobs to immigrants, with 82 percent of those questioned responding that immigrants are a burden to the country “because they take our jobs and social benefits.” On the other end of the spectrum, only 31 percent of Germans expressed this concern, probably because Germany’s unemployment rate is lower and because the jobs taken by immigrants tend to be for unskilled employment, which Germans frequently shun.

Surprisingly, when asked whether refugees are “more to blame for crime than other groups” in the country, only 30 percent agreed with that statement.

A study released last month in Italy found a striking correlation between an increased immigrant population and a spike in the crime rate. The study found that in a determined area, if the number of immigrants increases by 1 percent, the crime rate in the same area goes up by 0.4 percent.

One of the more troubling discoveries of the study was that for the first time, the crime rate in the north of Italy, which has the highest concentration of immigrants and asylum seekers, is surpassing that of the south.

The rise of populism in Europe is also tied to a sense of stagnation and disillusionment with the ability of the current system to lift it out of its economic malaise, the Pew study found. Among major regions of the world, Europeans are the most pessimistic about the future, with only 28 percent agreeing with the statement that “when children in our country grow up, they will be better off financially than their parents.” 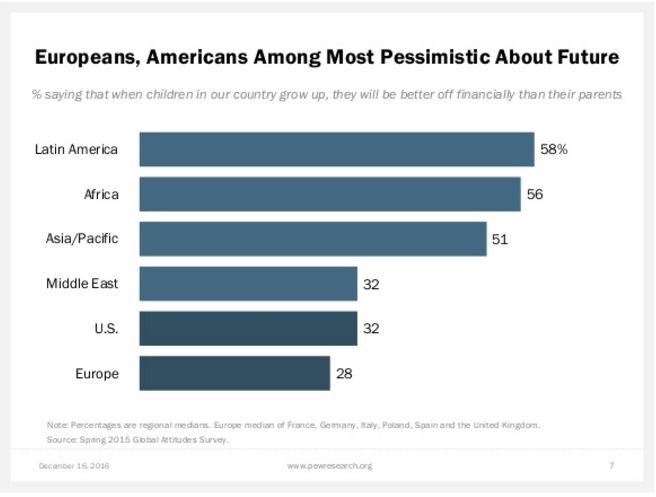 Many Europeans blame the current situation on the loss of national self-determination and want their countries to take back power that has been handed over to the EU. The study found that the majority of the population believe that national governments should handle the country’s problems, rather than having them dealt with at the supranational level.

Among the countries where the study took place, those who favor political parties seen as populist tend to be especially wary of global engagement, more focused on internal problems, and more worried about the effects of the recent influx of immigrants into Europe.