BUDAPEST, Hungary (AP) — Russian President Vladimir Putin visited Hungary on Thursday to discuss prospective energy projects with its leader, who has cozied up to Moscow despite Russia-West tensions. It was his first trip to the European Union since the U.S. election.

Hungarian Prime Minister Viktor Orban, a populist dubbed “little Putin” by his opponents, has been critical of the U.S. and EU sanctions imposed on Russia for its actions in Ukraine.

Speaking after the talks, Orban deplored the West’s “anti-Russian policies,” which he said hurt Hungary’s trade with Russia and cost some $6.7 billion in lost export opportunities.

“It’s wrong to try to settle problems unrelated to the economy with economic methods,” Orban said in a reference to Western sanctions against Russia. “The world is changing, helping improve conditions for cooperation between Russia and Europe.”

For his part, Putin hailed Hungary as “an important and reliable European partner for Russia.”

U.S. President Donald Trump has promised to mend ties with Russia, which have sunk to post-Cold War lows over the Ukrainian crisis, the war in Syria and allegations of Russia’s meddling in the 2016 U.S. election. For the first time since his inauguration, Trump on Saturday had a phone call with Putin, which both the White House and the Kremlin described in strongly positive terms.

Ahead of Putin’s visit, Hungarian Foreign Minister Peter Szijjarto criticized the previous U.S. administration for pressuring Hungary to prevent it from warming up to Moscow and voiced hope that Trump will take a different course. 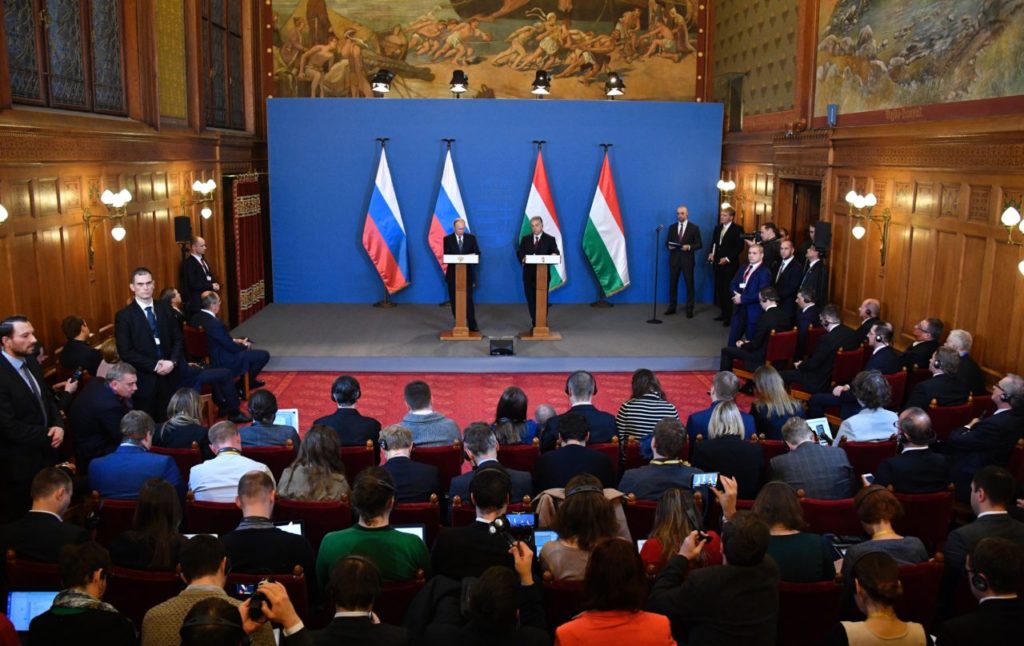 “If American pressure has been taken off European countries in terms of the sanctions – and there seems to be a good chance for this – I believe all of those who emphasized pragmatic relations and talked about the need to reevaluate the sanctions will be more courageous,” Szijjarto said.

Putin and Orban share a disdain for the Obama administration. The Hungarian premier had criticized it for what he described as attempts to influence Hungary’s domestic policies, such as a ban on entering the U.S. for six Hungarians because of corruption allegations.

Orban, who also has faced EU criticism for building a barbed-wire fence along Hungary’s borders with Serbia and Croatia to stop migrants, has a sympathetic interlocutor in Putin, who has warned that inflows of migrants could destabilize Europe.

Putin last visited Hungary in February 2015, and Orban traveled to Moscow a year ago. Then and now their discussions focused on long-term supplies of Russian natural gas to Hungary and a deal to expand Hungary’s Soviet-built nuclear power plant with a 10 billion-euro loan from Russia.

Both projects, however, are still far from being implemented.

Putin and Orban said Thursday they talked about the possibility of extending prospective Russian pipelines to Hungary, but the prospective Nord Stream II and the Turkish Stream pipelines are still in the planning phase.

Putin vowed that one way or another, Russia would find a way to supply Hungary with the gas it needs. Russian supplies now account for at least 60 percent of Hungary’s gas consumption.

“We will do everything to ensure supplies to Hungary,” Putin said.

The deal for Russia to build two additional reactors at the Paks nuclear plant, which was struck two years ago, still hasn’t taken off the ground because the EU’s regulatory demands. Orban voiced hope that the last remaining obstacles will be removed and construction could finally start.

Putin said Thursday that, if necessary, Russia could raise its loan to fully cover the costs of the 12-billion euro project.

The plant, launched in the 1980s, now accounts for about 40 percent of Hungary’s energy consumption and new reactors will allow it to double its output, Putin said.