The Council of Europe has claimed the UK media, “online sources”, and “certain politicians” are inciting “hate speech” and “hate crimes”, and demands the state strengthens “mechanisms” to “tone down” and silence such voices.

The Advisory Committee for the Council also said the “media should be promoting intercultural dialogue”, “training” journalists in the right way to report, and hiring more ethnic minorities.

The demands were made in a report, published Wednesday, on the UK’s compliance with the Framework Convention for the Protection of National Minorities (FCNM), a legally binding treaty signed by the UK.

“Certain sections of the media and online sources of hate speech are responsible for spreading racially hostile narratives, often targeting Muslims and Gypsies” and “social media [has] become the preferred vehicle for the expression of anti-immigrant and anti-minority sentiments,” the authors write.

“While the UK authorities and officials do seek to counter this regularly, more should be done to ensure that debates are carried out in a responsible manner respecting all groups in society,” they said.

“Existing mechanisms appear to be too weak to tone down derogatory and provocative language without encroaching on media independence, and little is being done to empower these mechanisms”, the committee added. 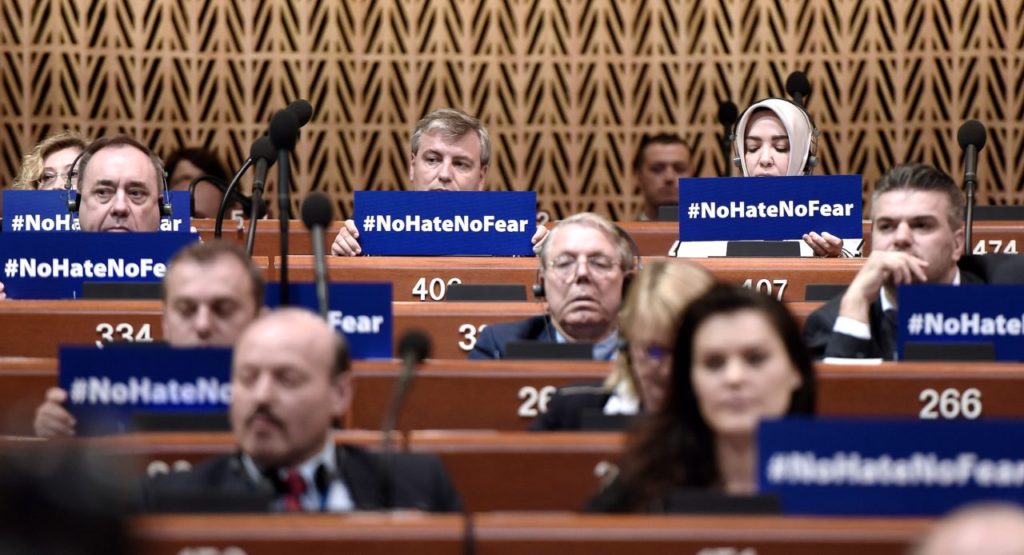 Members of the Parliamentary Assembly of the Council of Europe hold placards for the launch of the #NoHateNoFear initiative, in Strasbourg, eastern France, on June 20, 2016. (FREDERICK FLORIN/AFP/Getty)

The report acknowledged “serious efforts” have been made “to tackle hate speech and hate crime through policy frameworks and tools put in place… across the UK”, but demanded more be done.

Authors claim “online hate speech is on the rise, in particular towards Muslims”, whilst recognising it is now much easier to report supposed “hate speech” in the UK and have it logged as a crime.

UK police have disputed the existence of a recent “hate crime spike”. New Crown Prosecution Service (CPS) guidelines, published in January, were clear there is “no need for evidence” in order “to treat a crime as a hate crime” and have it logged in statistics as such.

“Rather than being simply the outcome of improved reporting and recording of hate crimes, this increase is believed to follow in part from specific, highly publicised trigger events” such as the election of a Muslim London mayor and the Gaza conflict, the authors wrote with little supporting evidence.