The count is underway for the 2017 Dutch general elections, with 388 voting areas to declare.

The election is seen as one of the most important in recent Dutch history as anti-mass migration candidate Geert Wilders hopes to build on the anti-globalist momentum of the Brexit and Trump campaigns.

At 6:30 am CET, the people of the Netherlands officially began to cast ballots in the national election which is expected to have a much larger turnout than in previous years. But election day has not been without controversy.

The Netherlands votes today in what could be a historic election as anti-mass migration candidate Geert Wilders and his anti-Islamisation Party for Freedom (PVV) look to make record gains in the Dutch parliament. Polls opened at 6:30 am local time and already Wilders, Prime Minister Rutte, and several other politicians have cast their vote.

While the voting has been mostly without incident, there has been one controversial moment during election day. Reports came out that a polling station within a Turkish Islamic cultural centre in Amsterdam had hung up Turkish flags and was broadcasting Turkish radio as members of the public went to cast their vote.

According to Dutch newspaper Telegraaf, the municipal authorities were made aware of the incident and went to the centre to make sure the flags and other items including leaflets for Diyanet, the Turkish government agency in charge of religion, were removed from the polling area.  “Campaign expressions are not allowed in the polling station. We have sent someone there to correct it,” a spokesman from the municipality told the paper.

The controversy comes only days after Turkey and the Netherlands engaged in a large diplomatic row after the Netherlands banned two Turkish ministers from campaigning for a referendum to allow President Recep Tayyip Erdoğan to abolish the office of prime minister.

Wilders said ahead of the voting this morning: “I feel very optimistic. We want to take out country back.” After casting his vote at around 9:30 am local time, Wilders remarked: “Whatever the outcome of the election today the genie will not go back into the bottle and this patriotic revolution, whether today or tomorrow, will take place.” 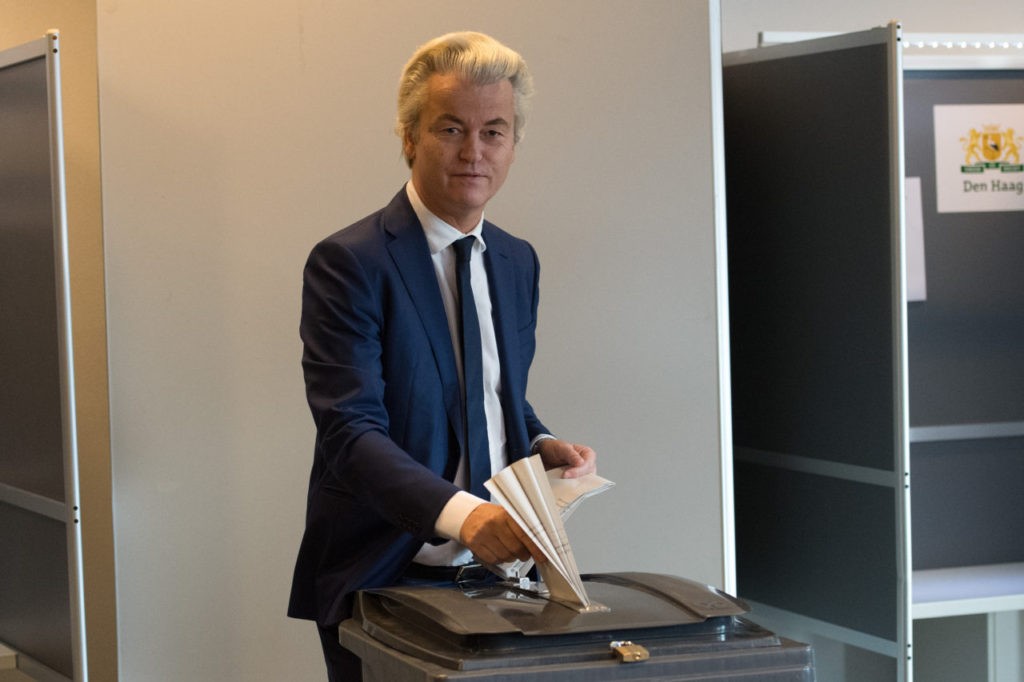 Turnout for the election is expected to be over 80 per cent, and potentially as high as 85 per cent. This would easily surpass 2012’s national election in which  74.6 per cent of eligible voters participated.  The increased demand has led to reports that some districts have even run out of ballot papers.

Some areas have even reported turnouts of up to 100 per cent.

This election sees one of the largest numbers of parties participating ever in Dutch national elections with 28 different parties on the ballot with 15 potentially getting seats in the parliament. The main rivalry has, however, come down to the party of Prime Minister Mark Rutte and the PVV of Geert Wilders.

The two party leaders engaged in a debate on Monday evening with Wilders slamming Rutte, calling him a “prime minister for foreigners”. He called on the Dutch to vote for his party which looks to combat Islamisation by closing all mosques in the country and banning the Quran.