Supporters of Islamic State have praised the deadly attack in Westminster, justifying the killings as “revenge” for the second Gulf war and air strikes on the terror group in Iraq and Syria.

“London Dictators who cling to an unclean kaafir [disbeliever]… His government killed one million Sunni Iraqis and raped young people and mothers. We will kill him and burn him,” wrote Samarouni (@moboto6) on Twitter.

Using the encrypted social media site Telegram, other terror sympathisers described the bloodshed in London as “blessed” on a pro-Islamic State message board.

One, according to The Telegraph, said the UK was paying “blood for blood” for its involvement in the U.S.-led coalition’s campaign against the jihadists.

“London attack was cowardly right? Have you ever thought about the continuous cowardly attacks by the Western-led coalition in Iraq?” added a user called Ummah News.

Beside an edited image of Big Ben being blown up (above), another wrote: “Our battle on your land is only just beginning.”

Jihadists have repeatedly threatened to strike the UK in recent years. In April last year, Islamic State released a video, praising the attacks in Paris and Brussels and promising London, Berlin, or Rome will be next.

The video, titled, “Fight them, Allah will punish them by your hands” after a Quran verse (009:014), quotes another verse (191-193) calling on Muslims to “kill [infidels] wherever you find them” and promised more “dark days” for Europe. 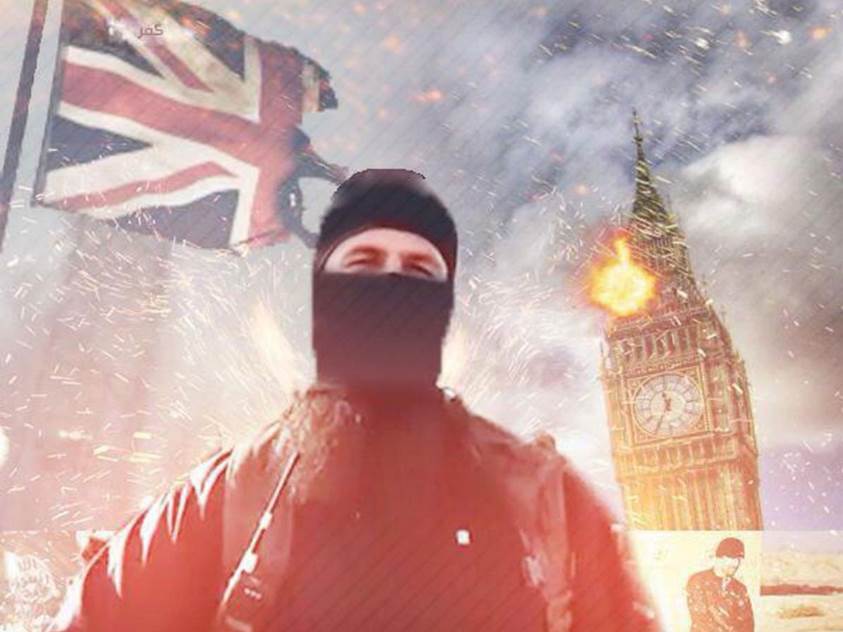 A screenshot from the “Fight them, Allah will punish them by your hands” video released in April 2016.

“Nations of the cross this message is for you. Know that your options are few: either you join Islam, or pay tribute, or face the war,” the narrator added.

“So it was Paris yesterday and today Brussels. Allah knows where it will be tomorrow. Maybe it will be in London, or Berlin, or Rome,” he said.

Shortly after the declaration, from the caliphate in the Middle East, Abu Mohammad al-Adnani, a now deceased Islamic State spokesman, instructed European followers to carry out attacks at home in an audio message.

“If you are not able to find an IED [improvised explosive device] or a bullet, then single out the disbelieving American, Frenchman, or any of their allies. Smash his head with a rock, or slaughter him with a knife, or run him over with your car,” he said.

Islamic State has not claimed Wednesday’s attack, but police have said they are treating it as an “Islamist” terror incident as the tactics used mirror those used by the group in other strikes on the West.

Between 750 and 1,500 Brits have travelled to the Middle East to fight with Islamic State, and many have returned to the UK.