The hipster-right Identitarian youth movement in Austria hung a large banner on the Turkish embassy in Vienna telling Turkish President Recep Tayyip Erdoğan to take his supporters back home to Turkey.

The demonstration is the latest protest by the anti-Islamisation group, who some refer to as the “Greenpeace of the right”. The protest saw a giant banner with the silhouette of 17th-century general Prince Eugene of Savoy and the words: “Erdoğan, take your Turks home!” The group also threw mock airline tickets with Erdoğan’s name on them out of a nearby window, Vienna Online reports.

On their website, the Identitarians said their protest was inspired by the recent comments by President Erdoğan which the group said were a “declaration of war on Europe”.  The youth movement cited Erdoğan saying that Turks in Europe should have more children and that they were the “future of Europe“, as well as his comments from Wednesday telling Europeans they “would not be safe on their streets”.

Philipp Huemer, leader of the Vienna branch of the group, said: “The Turks in Europe are increasingly acting as the fifth column of their president. The thousands of demonstrators on the streets throughout Europe after the failed coup in Turkey or the riots in Rotterdam after banning an election campaign by the Turkish family minister show this.” 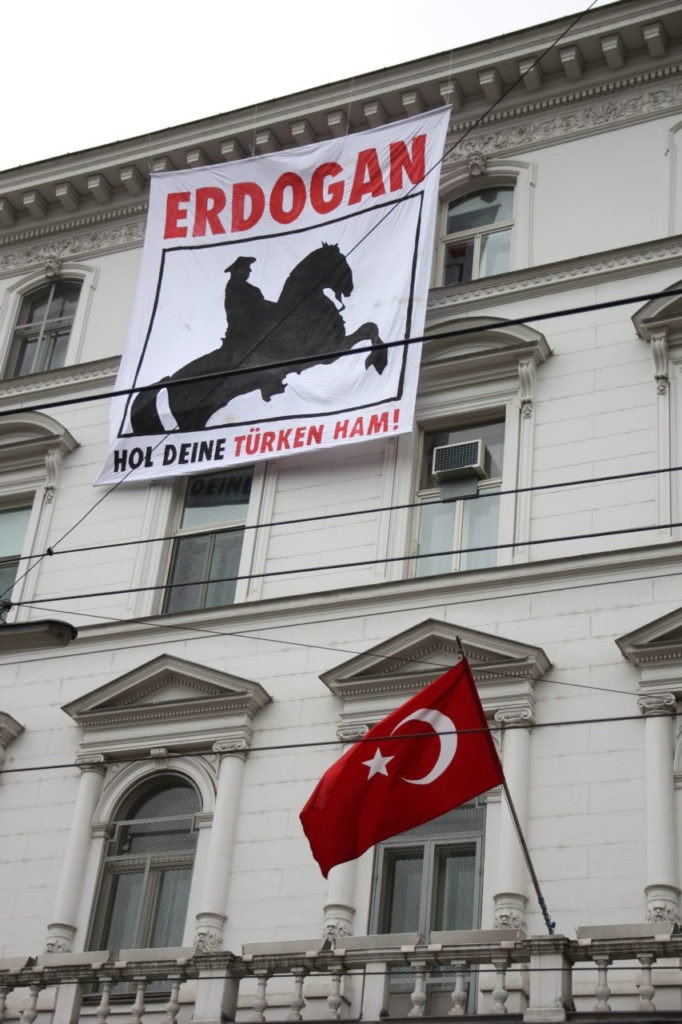 “In Austria itself, almost 70 per cent of the so-called ‘Austrotürken’ voted for the Erdogan [AKP] party. Many Austrians with a Turkish passport also have Turkish citizenship illegally. Pro-immigration parties such as the SPÖ are elected by 60-80 per cent of the Turks,” he added.

“We, as European youth, reject the Turkish colonisation plans and will defend against them. When the Turks in Austria see themselves as grandsons of the Ottoman conqueror Süleyman, we are the grandchildren of the defenders of Vienna and Europe,” Huemer said.

Breitbart London spoke to Austrian national Identitarian leader Martin Sellner who explained why the group used an image of Prince Eugene of Savoy, known for his military genius and liberation of the Balkans from the Turks in the 17th and early 18th centuries. He said: “Erdoğan addressed the Turks in a speech in Vienna as the ‘Children of Kara Mustafa’.”

Kara Mustafa Pasha led the Turkish forces at the siege of Vienna in 1683 where he was soundly defeated by a coalition that included Polish King Jan III Sobieski and a young Prince Eugene.

The reaction of populist politicians has also been deeply critical of Erdoğan. Dutch anti-Islamisation politician Geert Wilders said that Erdoğan was not welcome in the Netherlands and French Front National leader and presidential candidate Marine Le Pen called for a ban on Turkish campaigning in France.