French satirical magazine Charlie Hebdo is under fire from leftists who accuse the publication of sexism after its latest cover depicts the 64-year-old wife of newly elected French President Emmanuel Macron pregnant.

Charlie Hebdo, notorious for their scathing cartoon depictions of French politicians, religious figures, and anyone else they care to satirise, published the new cover on their Facebook page earlier this week.

Many slammed the paper in the comments, saying the cover was in bad taste and sexist, as the new first lady of France is 64 years old – 24 years older than her husband. 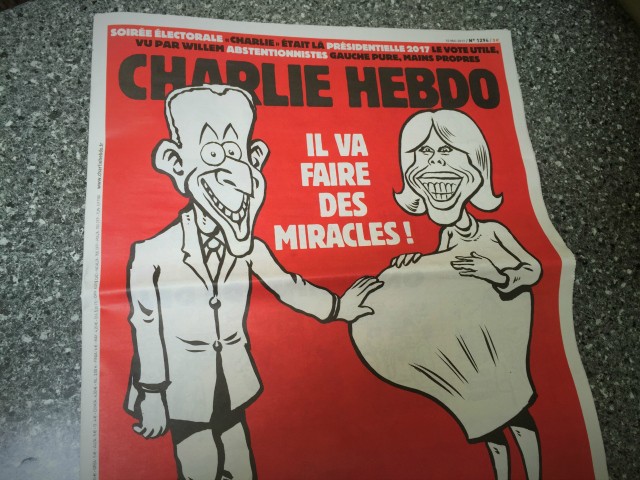 One user wrote: “You can move on, I think we all understood that she is older than him and then?”

The age difference between the pair has been a source of intrigue in France, especially after it was revealed that Macron’s father had sent him away from his hometown of Amiens at the age of 17 to get him away from Brigitte who was young Macron’s teacher at the time.

On Twitter, the reactions were just as scathing with one user writing: “And the contest for the biggest misogynist is widely won by Charlie Hebdo.”

Another Twitter user said: “Freedom of the press is combined with bad taste and mysticism at Charlie Hebdo this week. Pitiful.”

The cover is not the first time that Charlie Hebdo has caused outrage amongst sections of the French population.

The magazine is best known outside of France for the terror attacks that came after Charlie Hebdo published pictures of the Islamic prophet Mohammed. Twelve staff members were killed during the attack in January 2015. As a result, the paper decided to stop publishing pictures of Mohammed.

Despite the ban on Mohammed cartoons, Hebdo has not shied away from controversy in other areas. After the infamous picture of drowned Syrian migrant child Alan Kurdi made world headlines, the magazine dpublished a cartoon saying that he would have grown up to be a “bum groper in Germany”.

Even though Hebdo has managed to avoid making fun of Mohammed, they have still received more threats over their cartoons from Muslims. Last year, they were sent bomb threats after a cover which poked fun at the Islamic swimwear known as the “burkini”.