A small group of protesters threw gasoline bombs and fired flares at riot police after the marches ended in Athens. Police responded with tear gas. The clashes broke out after peaceful marches involving around 12,000 people.

Nearby, protesting police officers blocked the entrance to a Finance Ministry building.

The protests occurred as lawmakers were set to approve another batch of reforms that will impose years more hardship on austerity-weary Greeks. 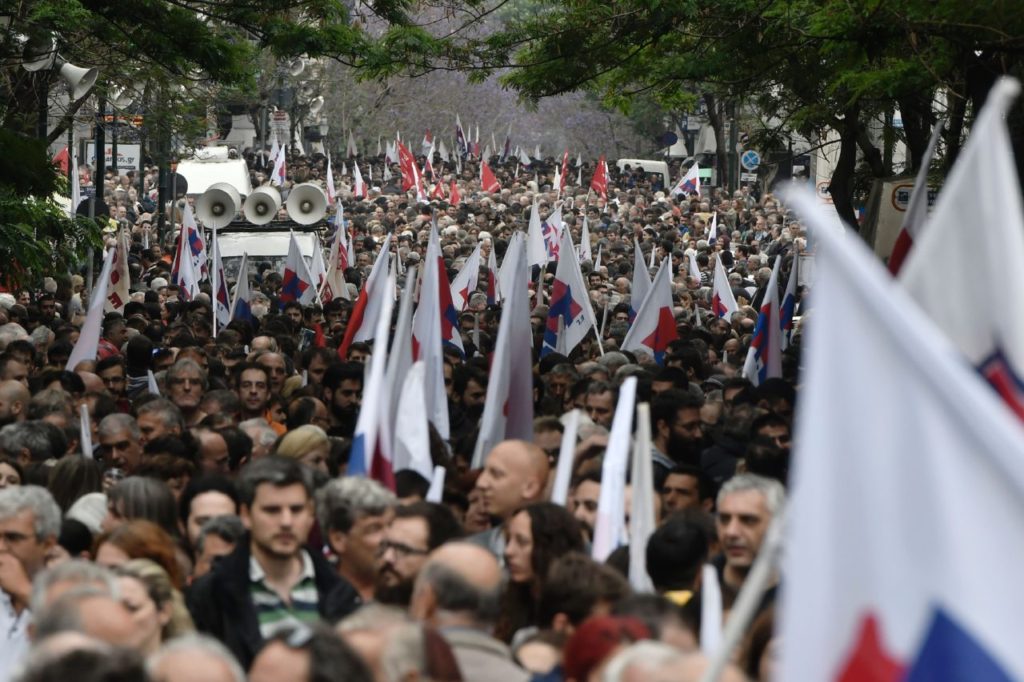 Protesters take part in a massive demonstration in Athens during a 24-hour general strike against a new round of austerity cuts imposed by the country’s international creditors in Athens, on May 17, 2017. (LOUISA GOULIAMAKI/AFP/Getty)

The new belt-tightening measures that will be imposed beyond the end of Greece’s third bailout next year, including pension cuts and tax hikes. The left-led coalition government agreed to the cuts as part of a deal with the country’s international creditors to release funds from its bailout.

Thousands of protesters were marching through central Athens toward parliament in a series of demonstrations as part of the strike.

“No to the new looting of salaries and pensions,” civil servants union ADEDY said.

Police unionists hung a giant banner off the side of Lycabettus Hill in the center of Athens, with a slogan in German and Greek reading “how much is the life of a Greek policeman worth?” 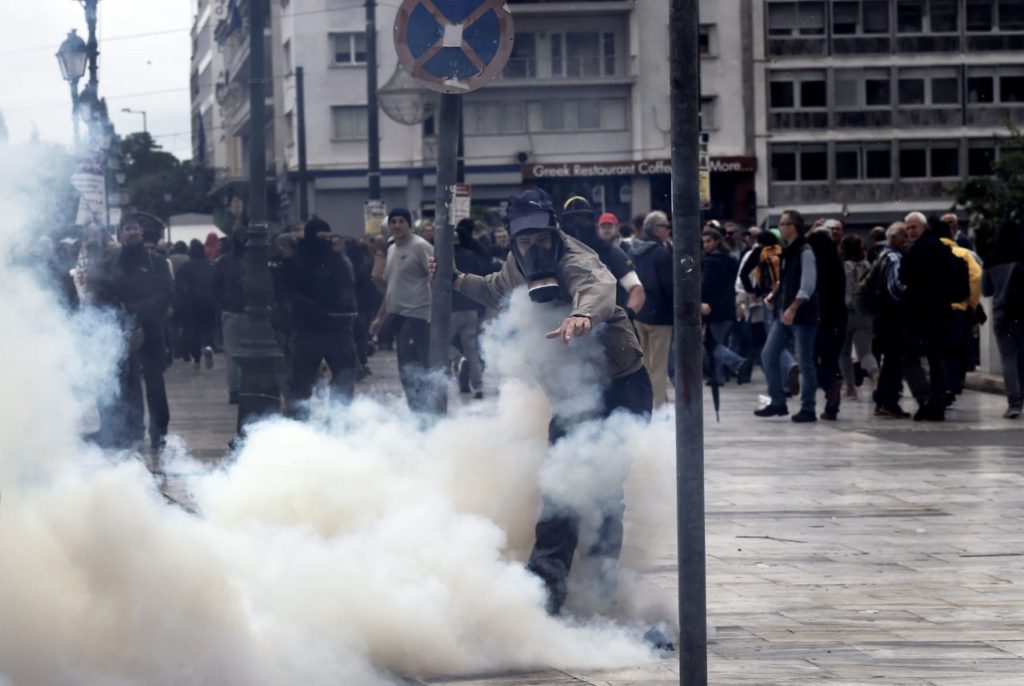 A protester kicks a tear gas thrown by riot police on May 17, 2017, during a 24-hour general strike against a new round of austerity cuts imposed by the country’s international creditors in Athens. (ARIS MESSINIS/AFP/Getty)

Public hospitals were functioning with emergency staff only, while public transport was disrupted, leaving many main roads gridlocked in the capital. Intercity trains were not running, and there was no subway service between Athens airport and the city. Courts were shut while lawyers and notaries public backed away from official duties, and customs and local government offices were closed.

Air traffic controllers were holding a four-hour work stoppage in the middle of the day, leading to the rescheduling or cancellation of more than 150 flights. Ferries were also tied up in port until late Friday after seamen began a four-day strike Tuesday.

Unless bailout funds are unlocked, Greece would once more struggle to meet a spike in debt repayments due this summer and face another brush with bankruptcy.

In parliament, lawmakers were debating the measures that include additional pension cuts in 2019 and higher income tax from 2020, ahead of a Thursday midnight vote.

On the streets of Athens, opinions on the strike diverged. 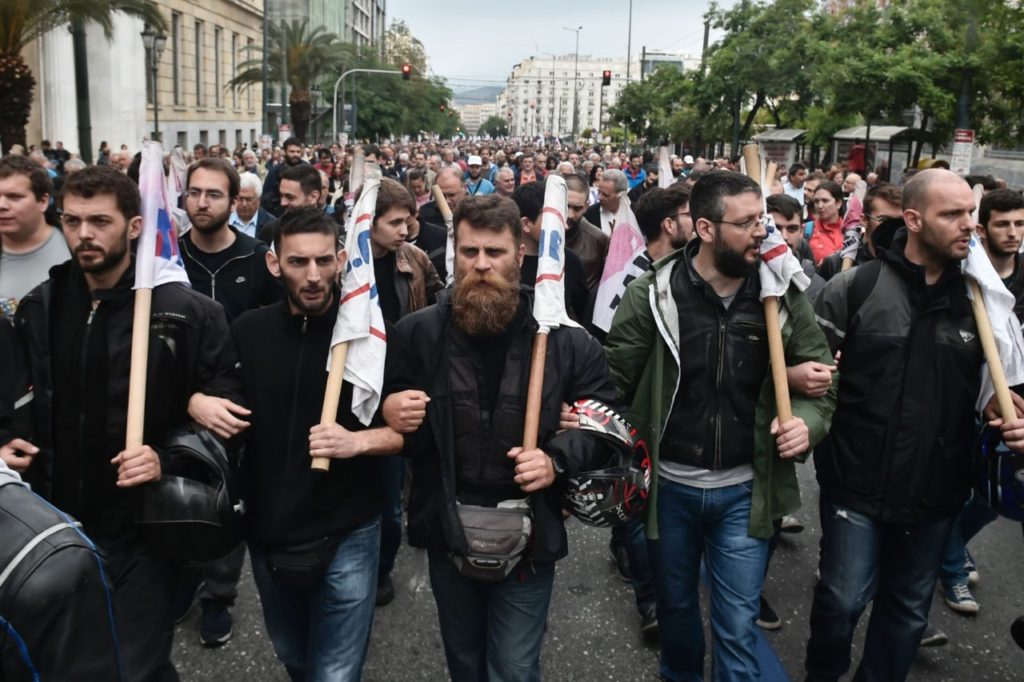 Protesters march in central Athens during a 24-hour general strike against a new round of austerity cuts imposed by the country’s international creditors in Athens, on May 17, 2017. (LOUISA GOULIAMAKI/AFP/Getty)

“It doesn’t make a difference whether you strike or not. All the measures will pass anyway,” said Apostolos Seitanidis as he walked in the city center.

But another Athenian, Panagiotis Adamopoulos, disagreed.

Unions and the opposition have compared the new measures to those of a fourth bailout, but without the corresponding funding from international creditors. The government, which originally came to power in 2015 promising to repeal previous austerity measures, has vehemently rejected the accusation, emphasizing that it will also take other measures to relieve poverty.

Prime Minister Alexis Tsipras spoke Tuesday morning with German Chancellor Angela Merkel, whose country has been the single largest contributor to the Greek bailouts, and discussed the issue of Greece’s debt, his office said Wednesday.

While the country’s finances have improved under the bailouts, the belt-tightening has led to spiraling poverty. Unemployment, while down from highs of above 27 percent, hovers at around 23 percent. 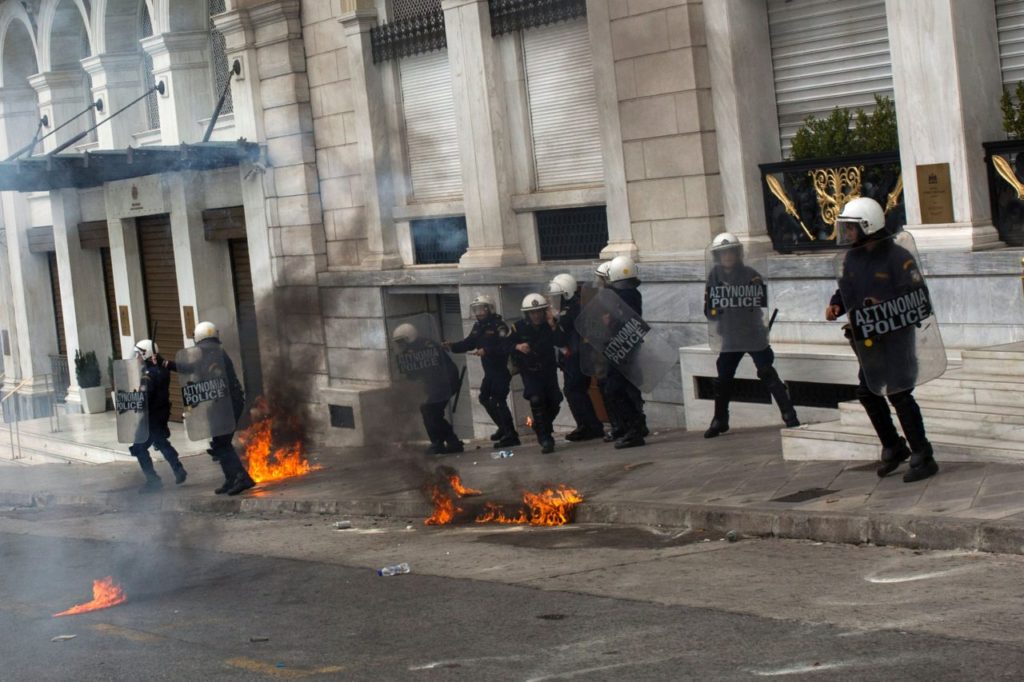 Demonstrators clash with riot police officers in Athens during a 24-hour general strike against a new round of austerity cuts imposed by the country’s international creditors in Athens, on May 17, 2017. ANGELOS TZORTZINIS/AFP/Getty)