A Conservative Party Member of the European Parliament has said Pakistan faces a lack of representation in the Brussels and Strasbourg legislatures following Brexit.

Sajjad Karim, a British-born MEP of Pakistani heritage, made the comments when speaking with the Karachi-based television channel GeoTV on Tuesday. 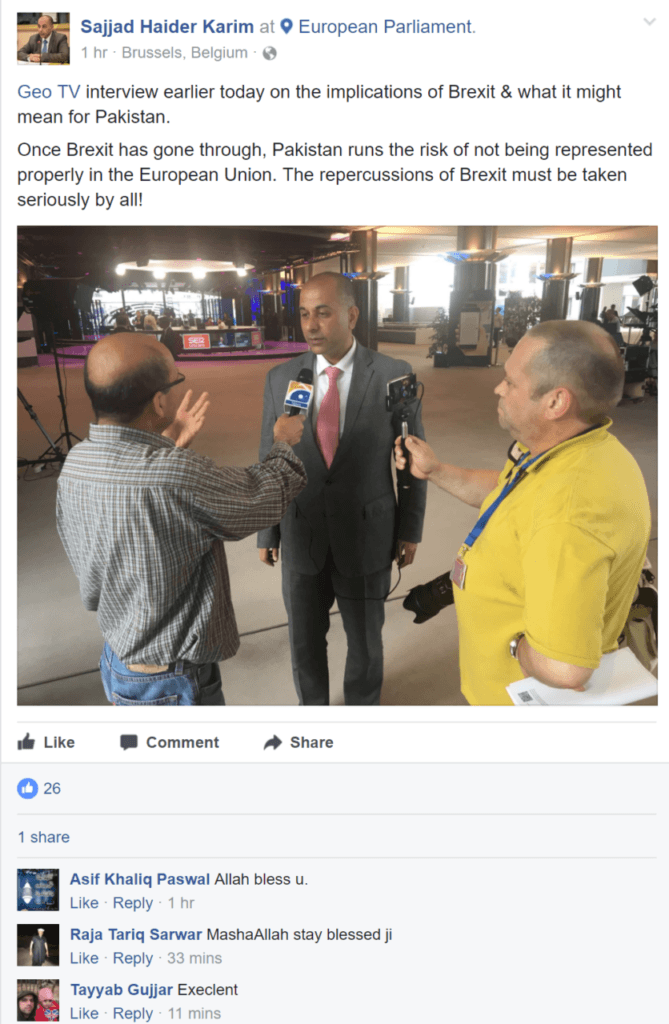 “Once Brexit has gone through, Pakistan runs the risk of not being represented properly in the European Union. The repercussions of Brexit must be taken seriously by all!” he wrote on Facebook.

Mr. Karim was unclear about via who, and how, Pakistan is represented in the Brussels Parliament, though the implication is that it is through him.

Responses to the Facebook post include comments such as: “Allah bless u”, and “MashaAllah stay blessed ji”.

In 2015, Karim was presented with Pakistan’s highest national honour for services that have helped the nation, the Sitara-i-Qaid-i-Azam presented in Islamabad by the President of Pakistan.

Mr. Karim was previously a Liberal Democrat MEP, before jumping across to the Conservative Party.

According to the ‘Pride of Pakistan’ website, “he established the European Parliament Friends of Pakistan Group, which he continues to chair to present day. He is also a member of the Friends of India and Friends of Bangladesh Groups”.

He has previously attacked fellow Conservative Party MEPs like Daniel Hannan, as well as once claiming former UKIP leader Nigel Farage would be “dealt with” were it not for cameras omnipresent around the Brexit leader.

In 2015, Mr. Karim was nominated for ‘Politician of the Year’ at the British Muslim Awards, which itself was sponsored by the Islamic Bank of Britain — a Shariah financing outfit now going by the name of Al Rayan, based out of Birmingham and London.

Mr. Karim also posted last week — during President Trump’s foreign trip — that it was “pathetic” that Melania and Ivanka Trump wore mantillas during the trip to the Vatican while failing to cover their heads in Saudi Arabia.

“No Donald hasn’t died,” he said. Adding: “The saying is ‘When in Rome’ not ‘when in Saudi Arabia’.

Breitbart London has reached out to the Conservative Party for comment.