Surveys of teachers’ voting intentions prior to the general election indicate  the Left dominates the British education system.

A number of outlets have been highlighting findings published by Tes, formerly the Times Education Supplement, shortly before the June 8th snap election.

These reveal a huge majority of teachers at primary, secondary, and special schools planned to back left liberal political parties on polling day – and the results of dozens of school mock elections around the same time suggest their biases are filtering down to their pupils.

Revealed: the statsics from @tes' #GE2017 survey in full https://t.co/Fd3RGKfoXa

Fully 72 per cent of secondary school teachers said they would back Jeremy Corbyn’s Labour Party, along with 10 per cent who were supporting the Liberal Democrats. Only 8 per cent intended to vote for the Conservative Party.

An unusually large 20 per cent of special school teachers were clumped together under ‘Other’ – which would include the Green Party, the left liberal Scottish and Welsh separatist parties, and, less likely, the right wing UK Independence Party, as well as some much smaller parties and independents. 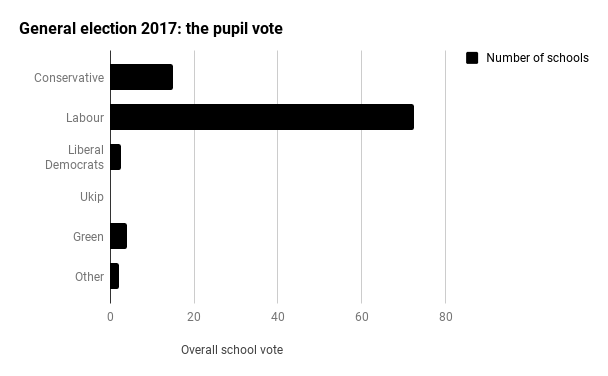 Source: Tes
The headteacher of a ‘United Nations Rights Respecting School’ even quipped that his primary’s mock elections persuaded him that “the voting age should be reduced to four“.

The influence of teachers and university faculty over young people may be having a significant impact on Britain’s political landscape, with many commentators suggesting that increased turnout among 18-25-year-olds was responsible for Theresa May’s unexpectedly poor performance in the elections – despite the fact she won millions more voters than previous Tory leader David Cameron.