Newly released European Union statistics show that Sweden’s population has grown by over one per cent in 2016, an increase driven more by mass migration rather than birthrate.

Sweden’s population grew by around 144,000 people in 2016 or a total increase of around 1.5 per cent. The increase makes Sweden only behind the small country of Luxembourg in terms of population growth, with the Nordic country adding 14.5 new people per thousand residents, according to figures published by the EU statistics agency Eurostat.

In terms of birthrates, while the country is tied with the UK for second place behind Ireland, the net growth of births minus deaths increased the population by only 2.7 people per thousand. The statistics mean that the population could have only increased in total numbers by mass migration rather than an increase in births. 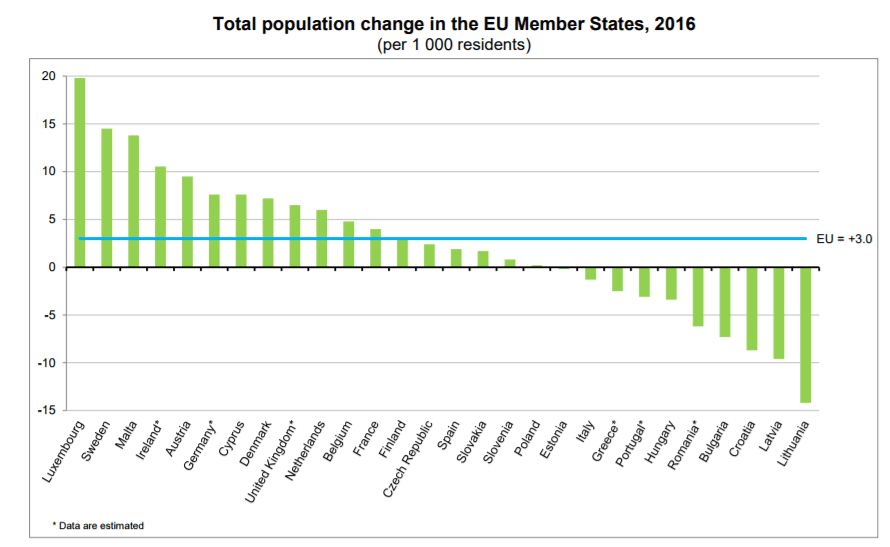 The average for all European countries was a population growth of 3 people per thousand or a total increase of 1.5 million people. Many countries like Italy, Hungary, Croatia, and Lithuania saw a decrease in their populations — Lithuania’s population shrank by almost 1.5 per cent in 2016.

The effects of mass migration to Sweden are, however, causing problems. The country is facing a massive shortage of housing due to the growth in population and other government services have become strained.

Crime rates have also been rising in recent years and many have long suspected that migrants make up a disproportionate number of criminal suspects, however official police figures are not released. Earlier in the year, police officer Peter Springare said the vast majority of cases he dealt with involved suspects who came from migrant backgrounds.

Sex assaults have also risen in Sweden including gang rape which was once rare. An independent research team used Swedish court documents to figure out that in gang rape cases men of foreign backgrounds accounted for around nine out of ten gang rape incidents.

Since 2015, Sweden has slowed the arrival of new asylum seekers; but the country still expects around 34,700 asylum seekers in 2017, according to the Swedish migrant agency, though the number could be as high as 45,000.