A senior Polish government spokesman has accused protesters blocking streets in Warsaw on Thursday and Friday of not respecting democracy, noting that the Law and Justice Party (PiS) government was elected with a mandate to enact the very reforms being protested.

Despite polls showing a majority of Poles believe judicial reform is needed, the protests have gone ahead and have been extremely well covered by European media.

Slamming those organising and taking part in the demonstrations, Polish parliamentary Commission on Justice and Human Rights chief and Stanisław Piotrowicz told Polish television the protest was hypocritical, reports wPolityce.

Piotrowicz said those standing against the government “cannot accept the fact that PiS was given a democratic mandate from the electorate. They do not want to legitimise democratic elections”.

PiS won the first parliamentary majority of any party in modern Polish political history in 2015. Pointing out the significant mandate this landslide gave his party, Piotrowicz pointed out the government had “won the election because we had promised a deep reform of the judiciary.”

He added: “This [policy] can’t have come as a surprise. I would understand the indignation of the opposition if we had said everything was perfect with the courts, and then after the election, we reformed everything.” 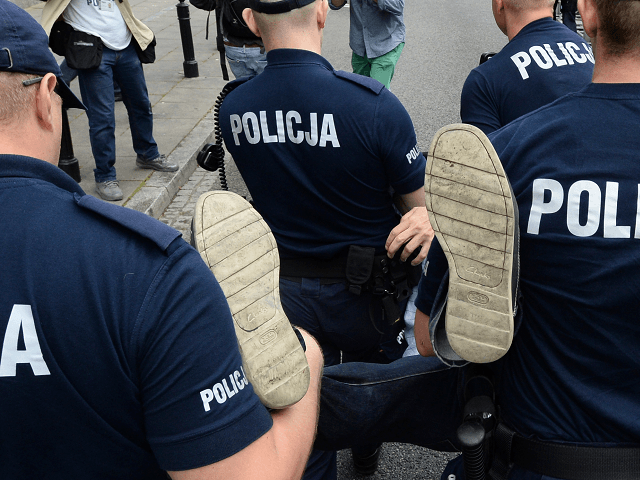 A protester is removed in Warsaw / AP IMAGES

Criticising those turning out on the streets, Piotrowicz said that while he believed there are some people who “care very much” about judicial reform among the protesters, some were “people who don’t know what [the protest is about]”.

The senior politician suggested that many had been convinced by that “there is something wrong in Poland” by certain media outlets, and that democracy in the country was in peril.

Dismissing this notion, Piotrowicz said that “civil disobedience is right when a usurper is ruling,” but not a government “based on a democratic mandate”.

Poland's New Govt Is Trying To Undo Communist Legacies – The EU Is Trying To Stop It https://t.co/lbsYtFzO08 pic.twitter.com/97tqlvWFV3

Poland’s lower legislative house, the Sejm, voted through the long-promised reforms on Thursday evening as tens of thousands of anti-government protesters blocked roads, and in one case even attacked a member of parliament. One protestor was arrested in relation to the violence, and 52 were issued fines for obstructing roadways.

The upper chamber of Poland’s parliament votes on the changes on Friday. If passed, they will give the parliament greater power to dismiss activist judges, and add a responsibility to consider Christian values when passing judgements.

The government believes these measures are necessary to reform a judicial system which has remained largely unchanged since the fall of the old communist regime in 1989.

In addition to protests by left-wing groups in Poland, the reforms have also been strongly opposed by the European Union, with European Council president Donald Tusk – himself a former Polish prime minister – summoning Polish president Andrzej Duda to explain the changes.

Breitbart London has previously reported on how the EU threatened Poland with a suspension of its voting rights in the bloc if it continued with the reforms, and senior EU officials have even suggested cutting off the country’s share of EU funding.

Poland has received some notable support from abroad, however. In addition to U.S. President Donald Trump’s decision to make the country his first European port of call ahead of the G20 summit in Germany, the Polish government also received messages of solidarity from Hungary.

Hungary has also been threatened by the EU for resisting a compulsory migrant quotas scheme, and for launching a domestic reforms programme aimed at improving the financial transparency of NGOs backed by overseas actors such as billionaire open borders campaigner George Soros.

Reaffirming his support for Poland amid discussions of EU sanctions, Orban said he “would like to once again assure Poland of Hungary’s friendship, compassion and solidarity.”