Germany and France are demanding the European Union (EU) allows them to reintroduce border controls within the free movement Schengen zone for as long as four years to help them fight terrorism.

The proposal, which is also backed by Austria, Denmark, and Norway, was leaked to several European media organisations including The Times.

The European Commission and its president Jean-Claude Juncker are likely to resist the plan, as open borders and the Euro currency are seen as key cornerstones of Juncker’s federalist vision for the bloc.

The proposal says that in “exceptional circumstances” Schengen members should be able to double the length of time for which they are currently allowed to suspend the zone along their internal borders.

“There is a need to allow a member state to reintroduce controls at its internal borders for a period exceeding six months,” the paper says.

“The grounds for such controls for periods exceeding six months would continue to involve the particular seriousness of the threat to internal security and the long-term nature of that threat.” 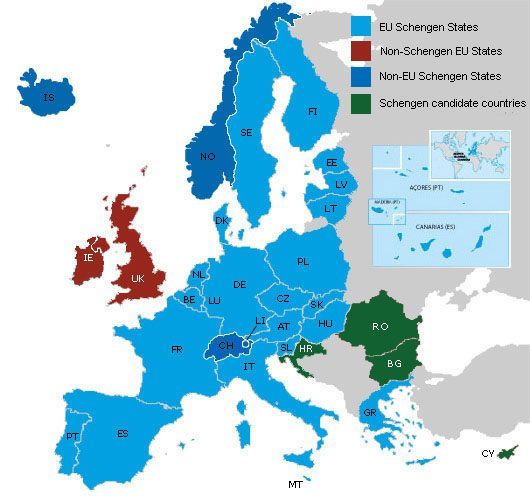 The Schengen Zone as it currently stands. (Credit: European Commission)

The paper envisages that “the total period during which border control is reintroduced shall not exceed two years” but “where there are exceptional circumstances that total period may be extended to a maximum length of a further period of two years”.

Current Schengen rules allow states to enact internal border ID checks for up to six months in the event of a “serious threat to public policy or internal security”. This can be extended by additional six-month periods, up to a maximum of two years.

Several of the Paris attackers utilised the EU’s open borders to travel from Syria and then between Belgium and France to commit their attack. The Berlin Christmas market attacker was also able to escape to Italy after driving a truck into a crowd.

During a television debate on Thursday, Mr. Juncker insisted that the EU’s passport-free travel zone was “not an invitation to terrorists”, though he admitted that terrorist cells had benefited from lax controls.