A Danish minister responsible for immigration and integration has shared a screenshot of the background of her iPad which is an image of one of the famous Mohammad cartoons that sparked uproar in the Muslim world over a decade ago.

Inger Støjberg, a hardline opponent of uncontrolled immigration, shared the image on Facebook, whilst reiterating her commitment to free expression after a museum decided to censor the images.

The Skovgaard Museum in Viborg, Denmark, chose not to include the drawing in a new exhibition about blasphemy since the Reformation, despite its obvious relevance to the topic.

“It is the museum’s own choice and they have their full right to do it, but I think it’s a shame,” Ms. Støjberg captioned the image, adding: “Honestly, I think we should be proud of the Mohammad cartoons.”

The publication of the image – of the Muslim prophet with a bomb in his turban – in a newspaper sparked the so-called “Danish cartoon controversy” in 2005.

Violent protests and riots erupted across the Muslim world, leaving around 50 people dead and sparking a debate in the West around free speech, self-censorship, and violence in Islam. 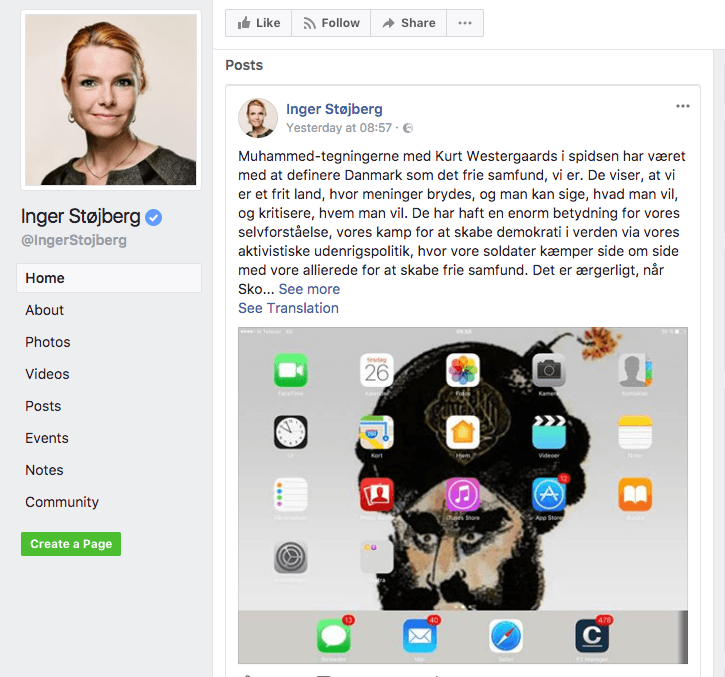 “I personally have (artist) Kurt Westergaard’s famous drawing as the background on my iPad,” Ms. Stojberg continued in her Facebook post.

“I do so because I love Denmark. I simply love the foundations of freedoms which generations before us have laid down and which our country is founded on.

“Freedoms, which mean that we can believe in whatever god we want, we have freedom of expression, so we can say – and draw – what we think, and here there is complete equality between the sexes.”

Ms. Støjberg is not unused to stirring controversy. In May of this year, she infuriated left-wingers by posting a picture of herself posing with a cake made especially to celebrate the tightening of immigration laws.

In late 2016, she claimed that “integration in Denmark has failed”, following a report on criminality and unemployment in 31 increasingly migrant-dominated areas.

“In my opinion, it is because we have been too scared to set out clear demands to the people coming to Denmark,” she said.

Adding: “We have not dared to say that we expect and demand that they provide for themselves and their families and that we expect them to adjust to Danish values.”