The Somali refugee who stabbed a police officer and rammed pedestrians with a van in Edmonton, Canada, had been ordered to be deported from the United States in 2011 – but was released before his expulsion date because ‘it was unlikely he would be returned in the near future’.

Abdulahi Hasan Sharif, 30, a known extremist who had been investigated by police in 2015, then absconded from the U.S. to claim asylum north of the border in Canada, reports CBC.

The Somali was charged by Canadian authorities after stabbing an Edmonton police officer and injuring four people when he hit them with a rental truck on Sunday.

According to Jennifer D. Elzea, acting press secretary for the Immigration and Customs Enforcement (ICE) office of public affairs, Sharif was transferred into the custody of ICE at Otay Mesa Detention Center in San Diego, California, in July 2011.

Two months later, on September 22, 2011, an immigration judge ordered Sharif to be deported to Somalia.

But the migrant was released on November 23, 2011, on an ICE order of supervision “due to a lack of likelihood of his removal in the reasonably foreseeable future”, Elzea confirmed with CBC.

Sharif then failed to report to the ICE enforcement and removal operations centre on his scheduled date of January 24, 2012.

Canadian Public Safety Minister Ralph Goodale confirmed the Somali had crossed the border into Canada in 2012 through a “regular port of entry” and obtained refugee status. 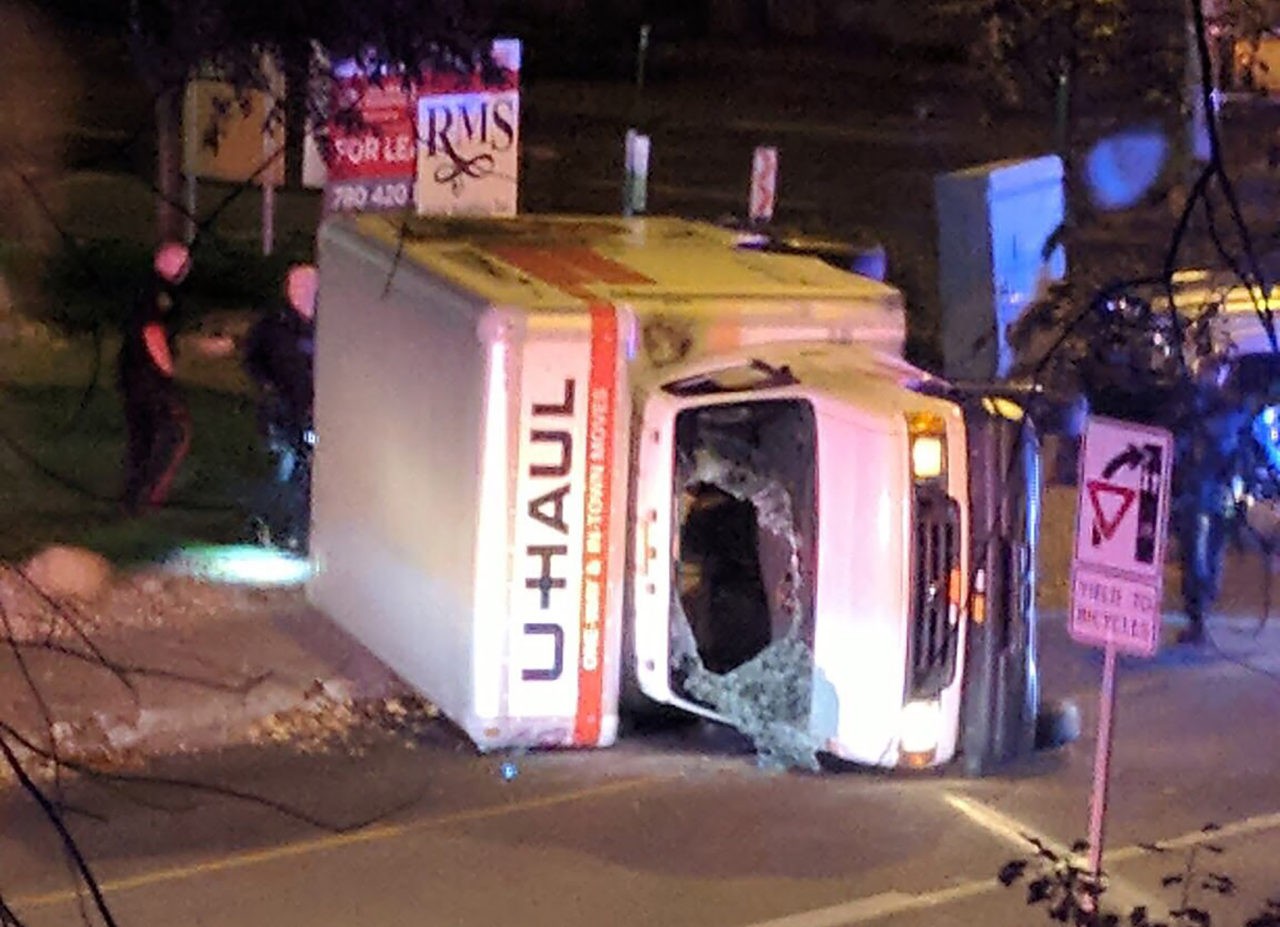 A rental truck lies on its side in Edmonton, Canada, on October 1, 2017, after a high-speed chase. (Photo by MICHAEL MUKAI/AFP/Getty Images)

Though Sharif had no known criminal history during his dealings with the U.S. immigration office, Royal Canadian Mounted Police (RCMP) confirmed the migrant had been flagged as a potential terrorist threat.

“We can confirm that in 2015, a complaint was filed with the Edmonton Police Service, around reports being made that the suspect was espousing extremist ideology,” admitted RCMP Assistant Commissioner Marlin Degrand.

“At the end of that exhaustive investigation, there was insufficient evidence to pursue terrorism charges or a peace bond.

“Further, the suspect was not actually deemed, at that time, to pose a threat to the security of Canada.”

After the attack on the police officer outside the Commonwealth Stadium, investigators found an Islamic State flag in Sharif’s abandoned vehicle.

The Somali has been charged with five counts of attempted murder, four counts of criminal flight causing bodily harm, one count of dangerous driving, and one count of possession of a weapon for a dangerous purpose.

Though the incidents were investigated as an “act of terrorism”, no terrorism-related charges have been laid against Sharif.

Mahamad Accord, a Somali-origin Canadian from the Edmonton Coalition of Human Rights and Justice who was in court on Tuesday to support the terrorist, claimed that the incident was “out of character” and blamed the attack on a suspected “mental health issue”.