A pharmacist who wrote “I love Islamic State” on social media has been convicted of showing a terrorist beheading video to a young child.

Zameer Ghumra, 38, “brainwashed” two primary school-aged children, telling them not to befriend non-Muslims and “to kill” anyone who insults Islam, the BBC reports.

A jury found him guilty at Nottingham Crown Court on Thursday of disseminating “terrorist propaganda” in the form of a graphic Twitter video on his mobile phone between January 2013 and September 2014.

During the trial, prosecutor Simon Davis said Ghumra believed in a “very, very, very extreme” form of Islam. He will be sentenced Friday.

One of the young victims described being shown “horrible and disgusting” beheading videos, and asked Mr. Ghumra “how can you behead people?” He said Mr. Ghumra replied: “If you truly believe in Allah, you can do it.”

In a police interview played to the court, one child said: “He put us on Twitter. He told us to follow whoever he followed. He was following ISIS and really bad people.” 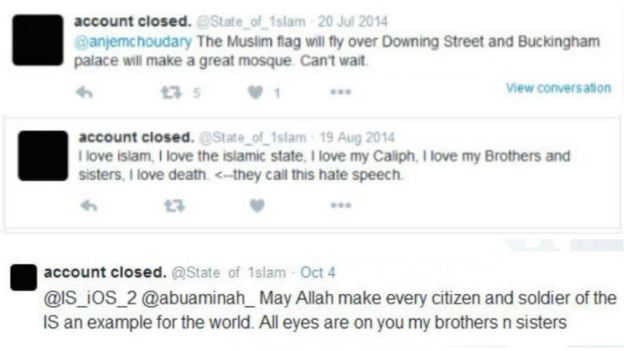 The court also heard how Mr. Ghumra, who had claimed the two boys were making “a false allegation”, had also made pro-Islamic State posts on social media.

“The Muslim flag will fly over Downing Street and Buckingham Palace will make a great mosque. Can’t wait,” he tweeted in July 2014.

“I love Islam. I love the Islamic State. I love my Caliph. I love my brothers and sister. I love death,” he wrote the next month, adding: “They call this hate speech.”

“May Allah make every citizen and soldier of the [Islamic State] an example for the world. All eyes on you my brothers [and] sisters,” he tweeted in October.

Speaking afterwards, Sue Hemming of the Crown Prosecution Service said: “Zameer Ghumra tried to brainwash impressionable children with this violent ideology by making one watch beheading videos and urging them both to adopt a hard-line religious outlook.

“The CPS case was that he intended to radicalise them in the hope that they would go on to be involved in terrorism. The children were brave to give evidence and we would like to thank them for helping to secure this conviction of a dangerous man.”