After more than a million Poles lined the country’s borders to pray for an end to “Islamization,” Ireland’s Catholics are gathering along the coast to pray that abortion remains illegal in their country.

Ireland is gearing up for a referendum challenging the Constitution’s recognition of the right to life of unborn children, and in response many are expected to head for the shorelines on November 26 for a “Rosary on the Coast for Life and Faith” to ask the Virgin Mary’s intercession to keep Ireland pro-life.

The eighth amendment to Ireland’s Constitution was adopted on Oct. 7, 1983, the feast of the Holy Rosary, the very day that Poland held its “Rosary on the Borders” prayer campaign earlier this month.

Sunday, November 26, marks the yearly Catholic feast of Christ the King, a day dedicated to affirming Jesus Christ’s kingship over all the world, and organizers have chosen an image of Christ the king as masthead for their Facebook page. The stated intention for the prayer crusade is “the Preservation of Faith in Ireland and the Protection of Life in Ireland.”

“Ireland was the first country in the world to be consecrated to Christ the King,” the organizers note. “The feast is extremely important. Acknowledging Christ as King has relevance for the spiritual, social, cultural, legal and political life of Ireland.”

The rosary event is also meant to underscore the importance of faith among Ireland’s citizens, particularly the young.

“Our island is in the midst of a catastrophic loss of Catholic faith especially among the young,” the event’s organizers say. “Ireland, North and South, is facing an immediate threat to the protection of our unborn babies.”

Promoters of the event are aiming at a minimum of 53 different congregating points around Ireland’s coasts, so that the clusters of pray-ers will “encircle Ireland with a human rosary.” The 53 points will represent each “Hail Mary” prayed during the rosary. 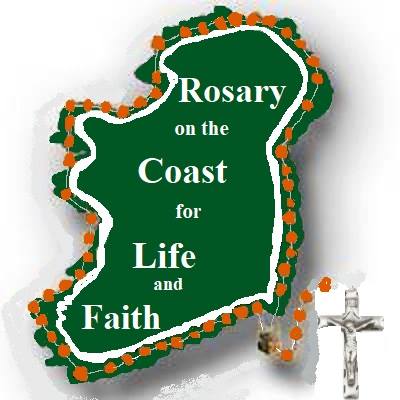 Ireland’s pro-life Constitution has come under heavy fire from abortion advocates, since it represents one of the last bastions of legal defense of the unborn. DCLeaks.com revealed last year that billionaire George Soros is harnessing his powerful Open Society Foundation (OSF) to turn Ireland into a pro-abortion country. Soros reportedly intends to use Ireland as a prototype to overturn anti-abortion laws in other Catholic countries around the world.

Leo Varadkar, the Irish prime minister, has said that the national referendum on the eighth amendment will be held in May or June 2018. Pro-life campaigners have complained that the ballot is poorly timed it would fall just before the visit of Pope Francis, who is scheduled to attend the World Meeting of Families in Dublin in August 2018.

Mr Varadkar, Ireland’s first openly gay prime minister, has described the eighth amendment as “too restrictive” and has also said that it was having a “chilling effect” on doctors.

The United Nations has also attacked the Emerald Isle for its pro-life laws, demanding that the predominantly Catholic nation repeal the Eighth Amendment to its constitution that bans the procedure. For years, the UN has targeted Ireland for its unwillingness to allow women to abort their babies, except when the mother’s life is in danger.

A UN committee in 2014 went so far as to claim that the Irish constitution violates international law, and a 2016 ruling from UN human rights “experts” said that Ireland’s abortion ban “subjects women to discriminatory, cruel and degrading treatment.”

Earlier this summer, Ireland’s annual “Rally for Life” in Dublin drew some 70,000 marchers, who called for the protection of the Eighth Amendment to the Constitution.

David Quinn, founder and director of the Iona Institute for Religion and Society, told Breitbart News that the immense turnout for the march sent “a very strong signal to the Government that they are going to meet tremendous resistance in their campaign to remove from our Constitution the right to life of the unborn.”