Prime Minister Mariano Rajoy set the date just over a week after a regional parliamentary election resulted in the separatist parties he hoped to keep out of power again winning the most seats and in turn a good chance to lead the next Catalan government.

At the opening session, the parliament typically chooses a house speaker, who then calls on a candidate to try to form a government in the following days.

Rajoy ordered the Dec. 21 election under constitutional powers he invoked in October to dissolve the previous parliament after it voted to declare Catalonia an independent republic. He also removed the region’s pro-independence president and his Cabinet.

Governing Catalonia will remain in the hands of Spanish authorities until a new president and Cabinet are chosen. Rajoy has not ruled out seizing control of the region again, if necessary.

While the anti-secession Ciutadans (Citizens) collected the most votes of any single party, the prime minister’s hope that the separatists would suffer a stinging rebuke at the polls went unfulfilled. 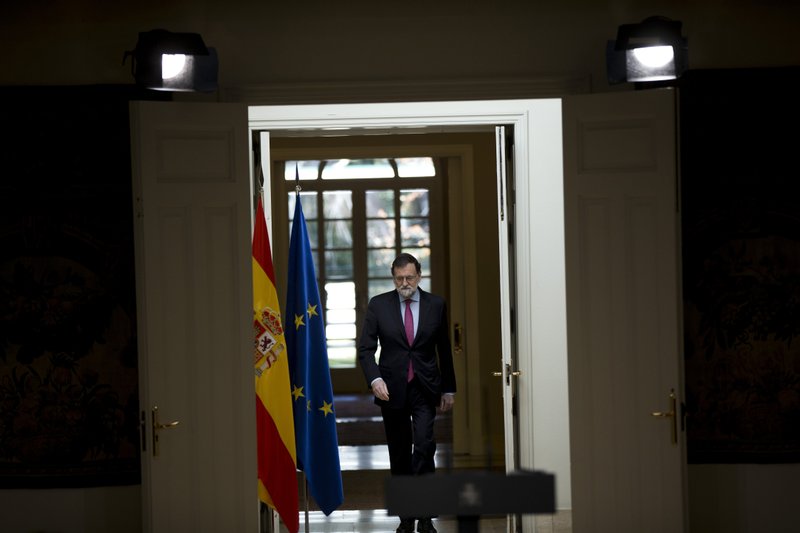 Spain’s Prime Minister Mariano Rajoy arrives to a news conference following to the last Cabinet meeting of the year at the Moncloa palace in Madrid, Friday, Dec. 29, 2017. (AP Photo/Francisco Seco)

It remains to be seen if the secessionist parties, which won 70 of the regional parliament’s 135 seats, will be able to form a government. Eight of their deputies elected last week are either in flight from justice or jailed in Spain while being investigated for alleged rebellion over the independence declaration.

They include former Catalan President Carles Puigdemont, who fled to Belgium after Rajoy ousted him from office and risks being arrested if he returns to Spain. The former vice president of Catalonia, Oriol Junqueras, is in jail outside Madrid.

Puigdemont’s and Junqueras’ parties are negotiating which of them to put forward for the regional presidency; the selected candidate must be present at a session of parliament, which presents obvious obstacles for both men.

Unless the status of the eight elected deputies changes or they cede their seats to other party members, the bloc risks losing the opportunity to take office again and fresh elections may be called.

The three pro-independence parties were united in the previous parliament, but disagreements have arisen amid the fallout from the move to break away from Spain and the central government’s takeover of Catalonia’s affairs.

Rajoy said 2017 saw Spain continue to thrive economically but had been a “very difficult year” because of the Catalan crisis. He said he hoped the next Catalan government would refrain from acting outside the law and would be capable of working for all Catalans and with the rest of Spain.

He called speculation that Puigdemont might be voted in again as Catalan president while remaining abroad “absurd.”