A far-left extremist identified as Halimo Hussein led an “anti-colonial” protest after storming into a Commonwealth-themed London cafe with eight other activists who chanted that wartime prime minister Winston Churchill “was a racist”.

The leftists stormed into the Blighty Cafe on Saturday and demanded the owners “apologise to the local community” for their branding “and promptly change it” – after the proprietor had invited the group for a coffee to discuss their concerns.

The group’s leader, Ms. Hussein, is a politics student and co-president of “equality and liberation” at the leftist School of Oriental and African Studies (SOAS) and was identified by multiple media outlets after footage was released of the protest.

The 24-year-old’s family is also believed to have come to the United Kingdom as refugees after having left Somalia during the civil war there, according to The Daily Mail.

The demonstrators at the Churchill cafe. They’re like brainwashed cult members, well I suppose momentum could be described as a Marxist cult. https://t.co/5rZlCnkguu

Another female activist addressed the customers saying: “We ask you that you boycott this cafe until they [the owners] take concerns of the community seriously.”

The group, which included a male wearing a pro-Palestinian badge, then chanted, “It is our duty to fight for our freedom” and “We have nothing to lose but our chains”.

When a customer politely challenged them saying that “Churchill fought for our freedoms”, the leftist activists chanted back: “Churchill was a racist.”

“I have already invited these people in for coffee to discuss their concerns. Instead, they have come in and shouted at my customers,” owner Chris Evans said.

“My staff have been left frightened and so I am reporting the incident to the police today.” 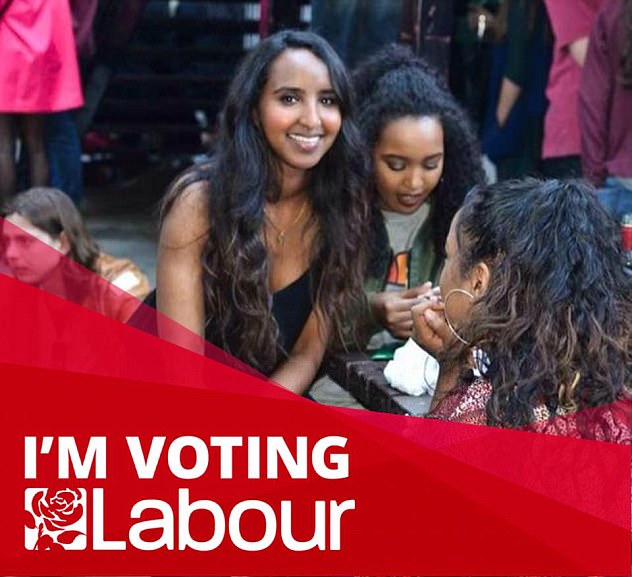 Ms. Hussein is a noted Labour supporter, and according to the Daily Mail, posted on Facebook that Jeremy Corbyn winning the Labour leadership “made her day” and updated her cover photograph with a Labour party frame. (It would appear that both her Facebook and Twitter accounts have been taken down.)

In her manifesto for the Students’ Union equalities role, she stated her commitment to “decolonising” her campus, writing: “Decolonial politics should be at the forefront in pushing for institutional change.”

However, given her desire to decolonise cafes, she may be facing an internal conflict given that Labour leader Jeremy Corbyn is allegedly a “regular customer” of the Blighty Cafe.

Calling the protesters “ignorant”, Mr. Evans told The Sun: “They say they’re Corbynistas but he’s been in the cafe before for a coffee and his wife has brought bread from us – are they going to boycott him now?

“I don’t know if you can ever win against these people. If you can’t, do you then just say f*** it and whitewash the walls and call yourselves the ‘Bland Cafe’ just to please them and lose your regular customers?

“It’s like these people feel we should have no history.”