An Austrian embassy attaché was recalled from his role in Tel Aviv after photos emerged of him wearing a clothing brand co-owned by Identitarian leader Martin Sellner who was recently detained and refused entry into the UK.

Attaché Jürgen-Michael Kleppich was photographed wearing a t-shirt from the clothing brand Phalanx Europa, which sells clothing, stickers, posters, and other merchandise with a focus on anti-mass migration and anti-Islamisation messages.

Kleppich posed in photographs posted to his Facebook account that showed him wearing two t-shirts including once which bore the caption, “Honour, Freedom, Fatherland”, Kronen Zeitung reports

The phrase was the rallying call for student fraternities during the 1848 liberal revolutions that shook the German-speaking world at the time. The current German flag also has a connection to the 1848 revolutions, with the black, red, and gold colours being adopted by the short-lived Frankfurt parliament, the first freely elected German parliament, from 1848 to 1850.

The other shirt, which appears to show a group of Landsknecht, medieval German mercenaries, contains the words “Stand Your Ground” and “Frundsburg 1525”, a reference to Austrian military commander Georg von Frundsburg and his famous battle at Pavia, Italy, in 1525 in which he and others captured the king of France, Francis I. 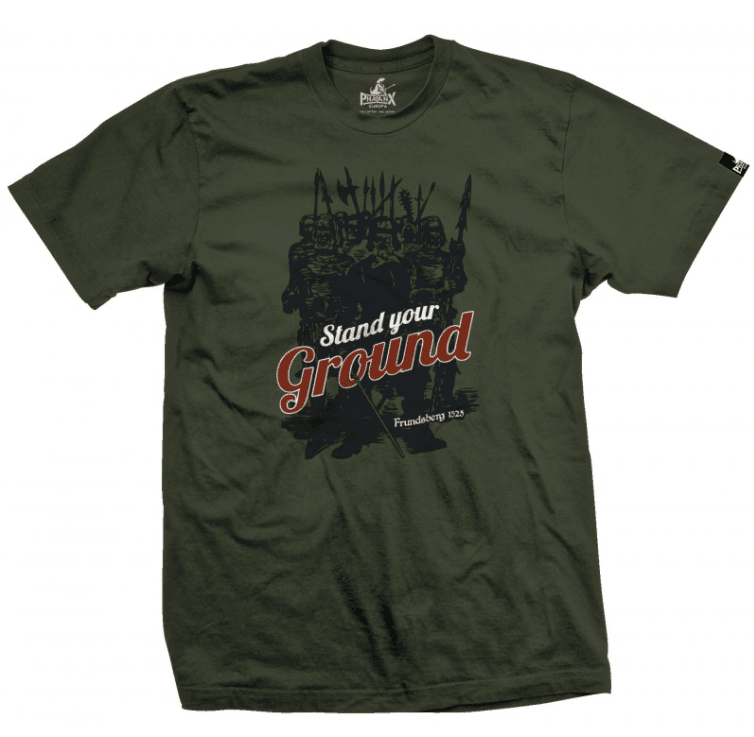 Despite the obvious connection, media outlets like the BBC claimed the shirt was a reference to the Nazi tank division of the same name.

Breitbart London spoke exclusively to Martin Sellner who said: “Phalanx Europa is a brand, that stands for patriotism and activism. The artificial outrage of the leftist media is ridiculous. The shirt was referring to the battle of Pavia in 1525.”

“As the famous Jewish Painter Arik Brauer pointed out recently, ‘The main threat for all of us in Europe is massive Islamic immigration, not the patriotic resistance,'” he added.

Earlier this month, Sellner, along with his partner, American political commentator and author Britanny Pettibone, were detained for three days by the UK government and refused entry to the country as Sellner planned to give a speech on the subject of free speech at London’s Hyde Park.

Canadian journalist and activist Lauren Southern was also detained at the port of Calais by UK authorities who used the Terrorism Act to hold her for several hours without charge and deny her access to the UK.

Despite the detainment and expulsion, the speech Sellner intended to give at the famous Speakers’ Corner in Hyde Park was given by former English Defence League leader turned citizen journalist Tommy Robinson to a crowd of thousands last Sunday.

Foreign Minister Kain Kneissl, of the anti-mass migration Freedom Party (FPÖ), recalled Kleppich “to clarify the circumstances and, if necessary, to subject the allegations to a legal examination”, according to the Foreign Ministry.

While many in the mainstream media have accused the FPÖ of having either Nazi ties or even Nazi sympathies, leader Heinz Christian Strache has been one of the few European party leaders to back U.S. President Donald Trump in moving the U.S. embassy in Israel to Jerusalem.

Last year, Strache said that he supported moving the Austrian embassy to Jerusalem as well and recognising the city as Israel’s capital.