The Times newspaper has asserted that an anti-terrorism group called Football Lads Alliance (FLA) is “racist” because members “booed and hissed loudly” at the mention of radical Islam.

In an anonymous article, Britain’s “paper of record” said the FLA represented the coming together of “far-right nationalism and football hooliganism” and harbours “a distinct undercurrent of racism”, utilising “jingoistic songs sung by England” fans, as well as “invoking the glories of Empire” as evidence.

As the numbers in Birmingham grew, stickers were distributed on which the words “Make Britain Great Again” surrounded the image of a red and blue lion. Placards were held aloft, which read “No to Sharia Law”, “Leave the EU” or carried the welcoming logo of For Britain, a red and blue trident, not dissimilar to a pitchfork.

The “pitchfork” to which the Times refers is actually Trident — the same name as Britain’s nuclear deterrent — which has long been a symbol of Britain’s historically strong navy.

6/ MORE embarrassment. Whoever wrote this for @thetimes doesn’t even know that Britannia — one of our national symbols — carries a Trident (also the name of our nuclear deterrent which maybe we should now rename ‘pitchfork’)? I’ll explain… pic.twitter.com/oBfWwquA1U

They paper adds: “The Times went undercover at an FLA march in Birmingham last weekend and saw evidence of threatening behaviour towards Asian bystanders and heard speeches attacking Muslims in Britain.”

In Birmingham, it was claimed that “a group of middle-aged men sang, ‘We want our country back’ while looking pointedly at a pair of Asian men they passed on the street”.

It was at its most sinister, however, when the FLA march reached its conclusion, and a man moved up close to an Asian teenager surveying the scene with a group of friends, before quietly telling him he had “30 seconds to leave”, several times over. A policeman arrived, the marcher played innocent, and soon he moved away. But without the expert control of the police on Saturday it would not have been hard to envisage disturbances.

The FLA eschews violence or intimidation, though the Times credits the “expert control of the police” for the lack of altercations at their events.

Other publications to attack the FLA include the “anti-fascist” Searchlight magazine, which was linked to the far left HOPE Not Hate group until 2011, and Al Jazeera, which is funded by the authoritarian, Islamic fundamentalist state of Qatar, and VICE.

Truth is, any group of mostly working class white men gathered together will be called fascist by the establishment media.

Truth is, any protest – by whomever – against mass immigration or Islam will be smeared. https://t.co/PDuOa6GMQ8

Ahead of the FLA protest in Birmingham, on the 24th of March, the paper sensationally wrote that “anti-racists fear [the march] could be the UK’s biggest ever Islamophobic mobilisation”.

The FLA was formed in June 2017, following a series of terror attacks in London, and quickly gained attention after around 10,000 people attended one of their first protests in October last year.

From its inception following the London Bridge attack, the FLA has insisted it is opposed to “all forms of extremism” and their marches are attended by people of different races and have remained completely peaceful. 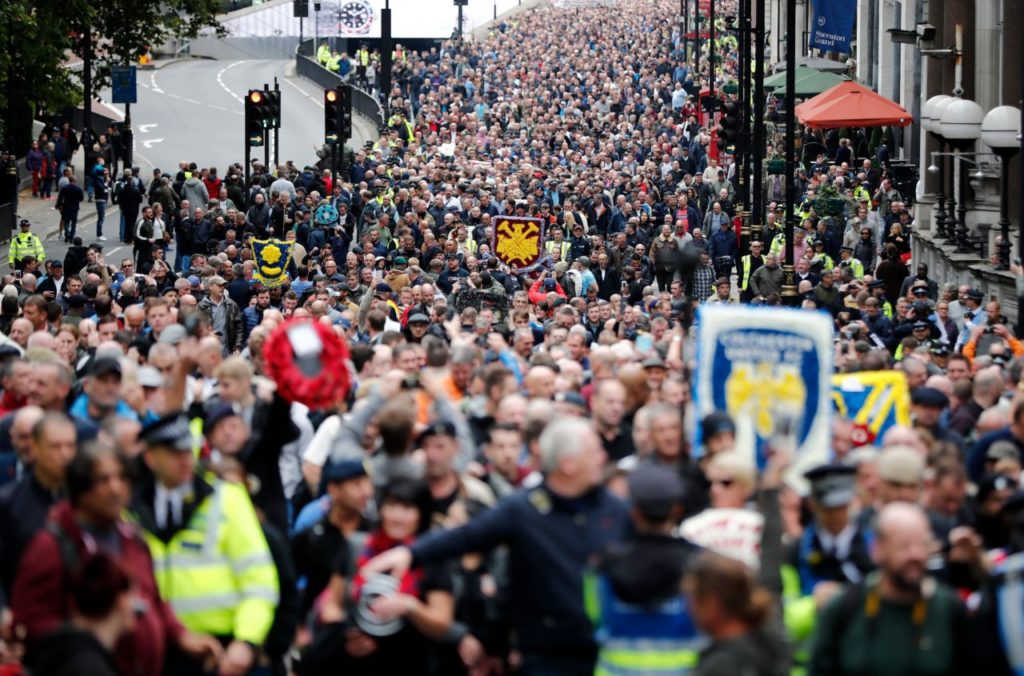 Demonstrators participate in a march by the Football Lads Alliance (FLA), from Pall Mall to Westminster Bridge, in London on October 7, 2017. (TOLGA AKMEN/AFP/Getty)

Following The Times’ hit piece, The Sun, which is also owned by Rupert Murdoch, wrote a similar article, reporting: “Initially [the FLA] was established as an ‘anti-extremist’ movement, but an investigation by the Times has revealed the group is being influenced by far-right activists with a more sinister agenda.”