Orban’s Fidesz party and a small ally won 133 of 199 seats in the legislature on April 8, a super-majority which will allow them to amend the Constitution unchallenged.

Orban, who critics say has introduced an increasingly autocratic style of government since returning to power in 2010, was elected by a vote of 134-28, with some of the opposition parties boycotting the session.

Orban, who took his oath of office immediately after the vote, outlined his government’s objectives in the coming years.

He repeated his criticism of liberal democracies, saying their era had ended in part because they have become incapable of “upholding Christian culture.” In contrast, he said that his new government would strive to build a “Christian democracy.” 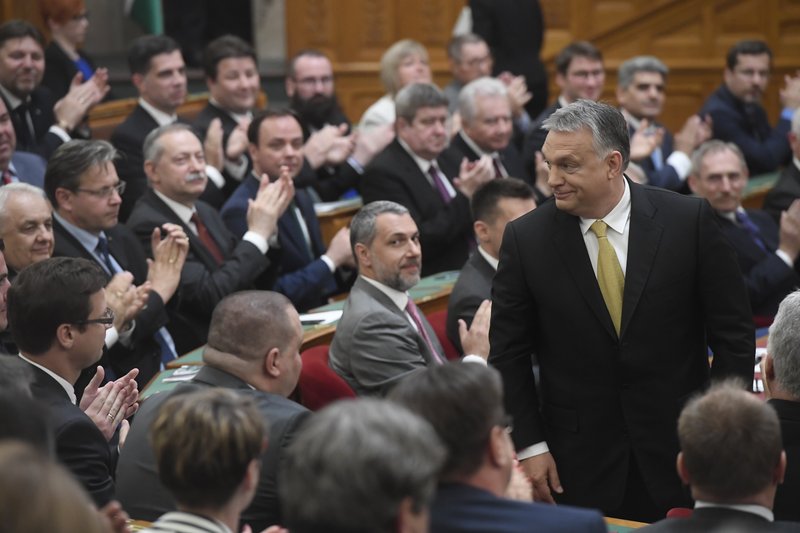 Acting Prime Minister and Chairman of Fidesz Party Viktor Orban, centre, is applauded by lawmakers of the ruling alliance of the Fidesz party and Christian Democratic People’s Party in the plenary session of the parliament in Budapest, Hungary, Thursday, May 10, 2018. (Tamas Kovacs/MTI via AP)

Orban also reiterated his view that mass migration into Europe would destroy the continent, claiming that thousands of paid activists, politicians and bureaucrats in Brussels were working to turn migration into a basic human right.

“I am convinced that in the end migration will lead to the dissolution of the nations and the states,” Orban said. “The national languages will weaken, borders will fade, national cultures will be dissolved and a single open society will remain.”

“We need the EU and the EU needs us,” Orban said. “For this reason, we are ready to take part as modelers of the changes that the EU cannot avoid even if it wants to.”

Regarding domestic issues, Orban said that by 2030, he wanted to raise Hungary’s living standards to the top five within the EU while also making the country one of the five most competitive in the bloc. He vowed to continue with large-scale road construction, attract investors to increase Hungary’s output and exports, improve health care and strengthen the armed forces. 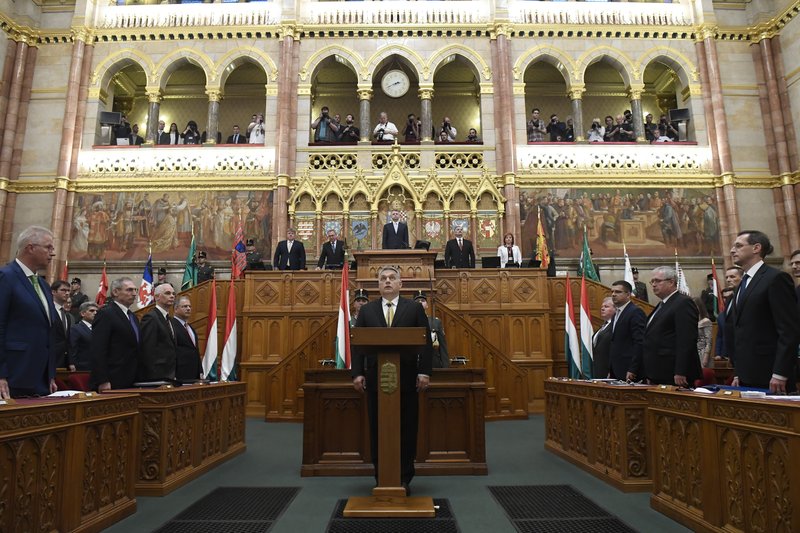 Chairman of Fidesz Party Viktor Orban takes his oath as Prime Minister of Hungary after he was re-elected for his third consecutive term in the new Hungarian Parliament in Budapest, Hungary, Thursday, May 10, 2018. Centre in the background: Speaker of the Parliament Laszlo Kover. (Tamas Kovacs/MTI via AP)

Orban has already outlined some of his new term’s upcoming first steps, including a constitutional amendment to give parliament final say over any efforts to settle foreigners in the country and a package of so-called Stop Soros laws, which would greatly restrict non-governmental groups working with refugees and asylum-seekers.

Over the past year, Orban’s government has conducted propaganda campaigns against Hungarian-American billionaire George Soros and groups he sponsors, accusing them of working to bring large numbers of migrants to Europe, a charge they reject.

Officials have also already outlined an even more centralized government structure, with the creation of a new unit within Orban’s office to more closely oversee the functioning of the government.