LESBOS, Greece (AP) — At the heart of Moria, an overcrowded refugee camp on the Greek island of Lesbos, is a dark rectangular building ringed with police guards and coils of razor wire. Taking photographs of it is prohibited.

It’s here that thousands of migrants are interviewed by asylum officers — and ultimately informed whether they will ever be allowed to leave the island.

Holding up a tattered asylum card that reads “Forbidden to travel outside Lesbos,” 40-year-old Syrian Ziad Rashid said he was supposed to be deported back to Turkey after he unsuccessfully appealed his failed application. But Turkey’s effective refusal to re-admit migrants means there’s nowhere he can go.

“I’ve been here for two years,” says Rashid, struggling to find the words in broken Greek and English. “It’s a big problem.”

Lesbos is facing a fourth summer of crisis. It’s one of five Greek islands near the coast of Turkey being used by the European Union to form a barrier to migration after more than a million people came through here in 2015-16, heading to western Europe.

But with 7,000 inhabitants, the refugee camp at Moria is now at more than 300 percent capacity, and outbreaks of violence, often triggered by trivial disputes, are increasingly common. A clinic run by the aid group Doctors Without Borders helps treat the sick among the camp’s 2,000 children, but has to turn less serious cases away. 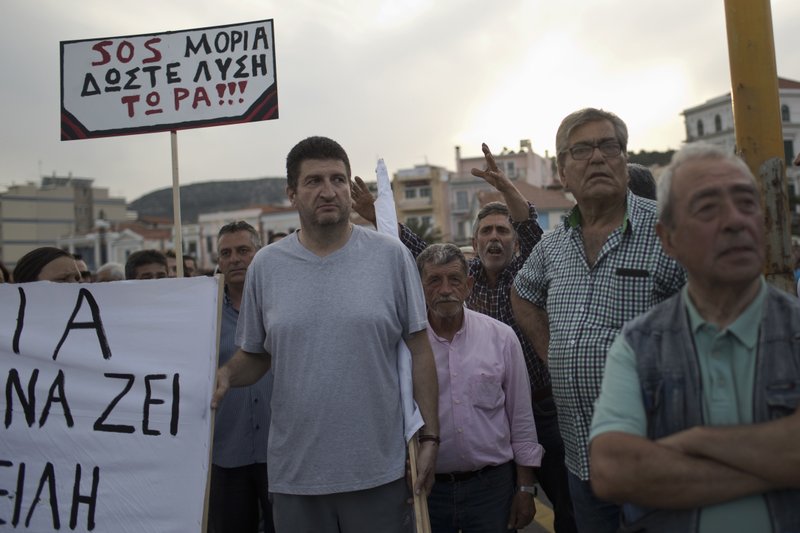 In this Thursday, May 3, 2018 photo islanders hold a placard which reads in Greek “SOS Moria. Solution now” referring to the Moria refugee camp, in a protest during a visit by Greek Prime Minister Alexis Tsipras on the northeastern Aegean island of Lesbos. “(Migrants) enter illegally, they have to leave” one of the protesters shouted. Many islanders seem angry at Greek and European Union migration policy, which has left thousands of people stranded on the island. (AP Photo/Petros Giannakouris)

Even so, more keep arriving: The number of island arrivals has surged this year from about 50 a day in 2017 to around 200 a day in recent weeks. Asylum applications are backed up by nearly three years, according to Lesbos’ regional governor.

Currently, asylum seekers on five Aegean Sea islands — Lesbos, Chios, Samos, Leros, and Kos — are banned from traveling on to the Greek mainland as part of the European Union’s controversial “containment policy.” That’s causing severe overcrowding at the islands’ camps, and the government has faced legal challenges and protests against the measure.

Meanwhile, to try to bypass the islands, an even higher number of migrants and refugees are now crossing Greece’s heavily militarized land border with Turkey in the northeast of the country.

That has forced Greece to overhaul its policy, and parliament is now debating draft legislation aimed at easing pressure on the islands. Under the proposal, migrants would be allowed to move to camps on the Greek mainland, but they would remain under restriction and could be banned from leaving the regions of the country where they are placed.

The plan has already drawn fire from human rights groups, which argue that containment is to blame for poor living conditions on the islands.

“This situation causes distress, violates people’s rights, and insults the dignity of some of the world’s most vulnerable people. It’s an open wound for Greece and human rights,” Dimitra Spatharidou, from the Greek office of Amnesty International, told a parliamentary committee.

Amnesty observers recently visited island camps, and found hundreds of people sleeping in makeshift tents, children sleeping in unsupervised sites, and some resting in fields they say were overrun by rats.

“We saw dozens of men with papers in their hand saying they were suffering from depression, anxiety disorders, and had suicidal dispositions; terrified women at risk of sexual violence in a European country that should be providing them with safety,” Spatharidou said. 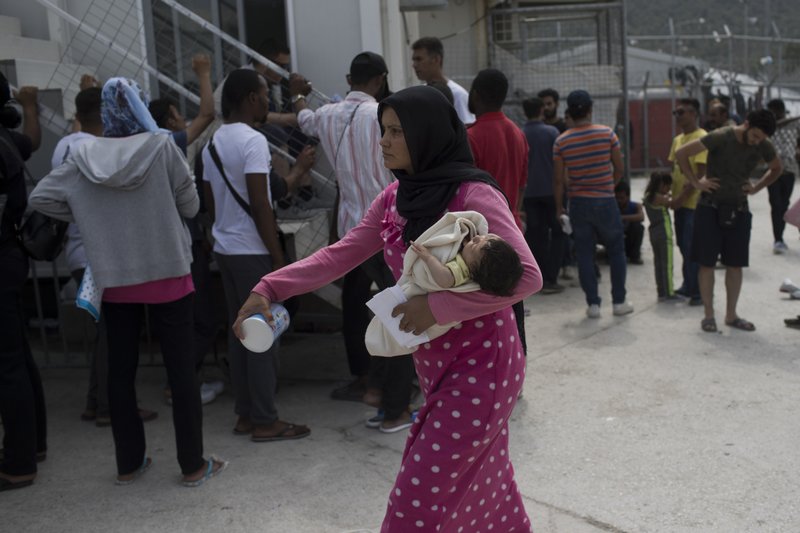 In this Friday, May 4, 2018 photo a woman walks with her baby as migrants and refugees wait outside UNHCR offices for their papers inside the camp of Moria on Lesbos, Greece. The government has promised to ease pressure on overcrowded camps on the islands by allowing more people to move to the Greek mainland. (AP Photo/Petros Giannakouris)

The government has also promised to speed up the processing of asylum claims by streamlining procedures and hiring additional staff and translators. But new arrivals on Lesbos and other islands are far outpacing the number of people being transported to the mainland on compassionate grounds or because their asylum applications have been approved.

Spread over a hillside, Moria’s shoebox-shaped trailers and tents are home to refugees from Syria, Iraq, Congo, and over 50 other of the world’s black spots of war and hardship. The camp, crowded but still generally kept in good order, spills into the neighboring fields, where asylum seekers — mostly African men — have little hope of leaving.

Serafin, from Togo, who was too afraid to appear on camera or give his last name, sleeps in a child-sized bunk bed. There are 70 more bunks like his wrapped in gray blankets for privacy and crammed into a single tent they call Little Turkey.

“It’s not easy, not easy at all. You can see where we sleep. And the smell,” he said, abruptly overcome by melancholy when asked about his prospects. “I don’t know what will happen. I miss my family.”

The island containment policy started two years ago, when the massive flow of migrants was halted. The EU encouraged countries on the route west to close their borders, asked NATO to patrol the eastern Aegean Sea, and pledged 6 billion euros ($7.1 billion) to Turkey to hold back migrants and accept deportations from Greece.

EU countries have accepted 22,000 refugees from Greece since the agreement between the EU and Turkey was reached, while just 2,000 have been deported to Turkey. That failed to offset new arrivals, and more than 16,000 migrants remain on the islands while more than 40,000 are on the mainland. A planned new round of resettlement has been complicated by the refusal of several EU members including Hungary and Poland to join the scheme. 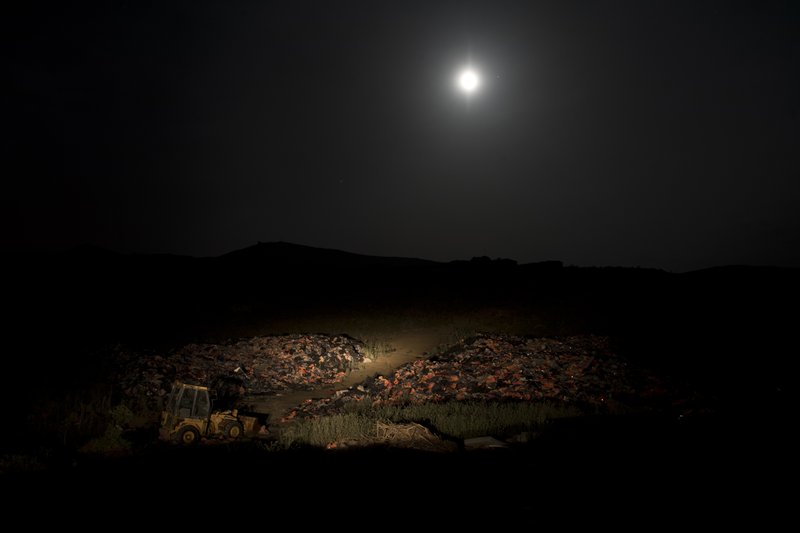 In this early Saturday, May 5, 2018 photo the moon rises above a huge pile of discarded life vests and dinghies used by migrants and refugees crossing from the nearby Turkish coast, at a dump on the island of Lesbos. More than a million refugees and migrants traveled to the Greek islands and onto Europe during the 2015-16 refugee crisis. Arrival numbers have again swelled in recent weeks over the Spring of 2018. (AP Photo/Petros Giannakouris)

“A period of difficulty lies ahead. We are fully aware of that fact,” he warned lawmakers.

Vitsas traveled to Lesbos last week, along with 19 other members of the Cabinet and the prime minister, to promise more help to the island, from improvements in the ambulance service to faster farm subsidy payments.

In a town hall meeting, Vitsas was berated by island residents complaining about petty crimes that have risen since the camps opened, and others who said they felt their good will toward people fleeing war had been exploited by Greek and European policy-makers.

Many island residents are angry to be missing out on a tourism boom that’s helping the country emerge from a decade of financial crisis. Business owners closed their stores for 24 hours in protest at the government visit, and street protests turned violent.

“We all welcomed the refugees. But there is a problem and it has to be taken seriously … We have a good quality of life here and it’s been taken away,” said Akis Argiropoulos, a hotel manager in the island’s capital, Mytilene. “Without the proper facilities and policing, the island cannot handle all of this burden.”