Coalition partner party leaders will go to the Quirinal Palace Monday evening to meet with Sergio Mattarella, the Italian President, to officially form a populist, Eurosceptic government which has prompted panicked headlines across the continent.

It is the second time the men have met — the last discussion with the Italian President eight days ago having been to ask for extra time to formulate a government — however, tonight is expected to see a name put forward for Prime Minister, and a governing programme.

Although no name has officially been announced so far, it was revealed Sunday that that individual to be put forward as Italy’s next Prime Minister had been selected. Although both Di Maio and Salvini will have wanted the top job, both have ruled themselves out to help coalition negotiations move forward smoothly. 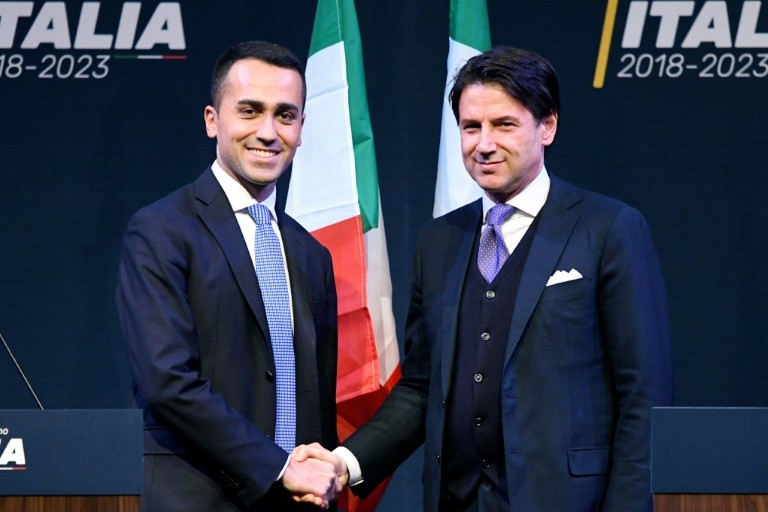 Leader of Italy’s populist Five Star Movement Luigi Di Maio (left) had named Giuseppe Conte, seen on the right, as one of his ministers in March, with the press speculating he will be named prime minister / AFP IMAGE

A political unknown, the University of Florence academic had already been put forward as a potential minister charged with cutting Italy’s bureaucracy down to size and attracted attention for being a technocrat with no political experience.

If he were to be made Prime Minister Monday evening, the academic figure would essentially act as a figurehead for the government while the powers behind the throne — Salvini and Di Maio — conduct the business of ruling day-to-day.

Other likely cabinet picks including Five Star leaders to take the labour and welfare ministry, allowing him to fulfil his party’s promise to deliver the implementation of a Universal Basic Income programme — partly funded, they claim, by the European Union.

Italian Populists Ready to Launch Coalition Govt Which Could ‘Pierce Brussels Through the Heart’ https://t.co/H3op0Li3oh

League leader Matteo Salvini is also to take a ministry representing an area of key interest for his voters as he is tipped to take the Immigration office. Before the election, his party promised to deport some 500,000 illegal and irregular migrants from the country, a move which will almost certainly bring Italy into serious conflict with the European Union.

Another campaign promise which the League made before the election was exploring the possibility of Italy leaving the Euro single currency, what the Italian media called an ‘Italiaexit’. While this did not make the final governing contract, the league’s economics spokesman Claudio Borghi will continue to push for it in government, reports il Giornale, which states the possibility of it happening remains “concrete”.